IAWRT Tanzania Chapter was not heard in the 1990s although there were members who were involved in the international organisation. The person who inspired us all to join the organisation at that time was Betty Mkwasa, co broadcaster with the then Radio Tanzania, Dar es Salaam. This was after her return from one of IAWRT’s meetings abroad. The first members to join IAWRT were Betty Mkwasa, Edda Sanga, Penzi Nyamungumi and Rose Haji Mwalimu. All were broadcasters with former Radio Tanzania Dar es Salaam now Tanzania Broadcasting Corporation (TBC).

Years went by and it was not until 2009 when IAWRT – Tanzania was officially installed as a chapter during the Cambodia Biennual conference. The Tanzania Chapter was officially registered in 2011 as a local NGO under NGO Compliance Act 2002. Membership has grown since then. 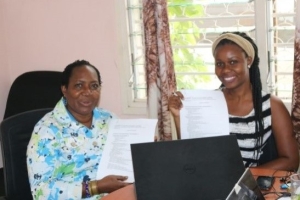 In the meantime members of IAWRT Tanzania are keen to be encouraged and supported to carry out advocacy work for media development and the welfare of women and children. Gender-based violence is on the rise in Tanzania and there is no longer safe space for women and especially children. Children are abused in schools, homes, places of worship and on the streets: a situation that threatens the life and well-being of future generations. The members applauded the hard work and passion for the organization demonstrated by the former management, and their efforts to increase the visibility of the association, particularly their work to ensure the safety of children and women through advocacy work and through gender mainstreaming project. However, they say more needs to be done.