IAWRT Norway was the first national IAWRT chapter, thanks to Gundel Krauss Dahl who became President of the International board at the conference in Zimbabwe in 1997. 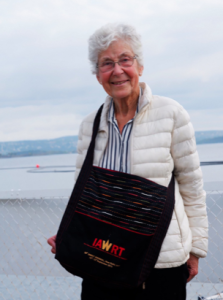 At the time, some IAWRT members were supported financially by their stations to pay membership fees and travels to the conferences. But most members were freelancers without external funding. Gundel made it her job to convince the funding agency NORAD (Norwegian Developing Agency) that IAWRT was worth supporting, and that core funding was necessary for the association to develop in a democratic, global and professional direction. As NORAD does not channel funds directly to international organisations, she took the initiative to form a national group and apply for membership with FOKUS, the umbrella organisation for Norwegian women’s organisations. Through the FOKUS membership, IAWRT Norway got funding for all its activities in the Global South on 3 – 4 years contracts from 1997 to 2018.

The Norway chapter facilitated the relationship with this primary funder for 21 years. The task was time consuming but brought valuable experience. The FOKUS reports became more demanding and complicated over the years, and control routines became stricter.  But the chapter could benefit from an overhead allowance of 7% of the budget.  The money was used to fund national members meetings and international conference travels.  Norwegian members delegation was often amongst the more substantial ones.  This was also a benefit that eased recruiting of members.  Norwegian board members also conducted annual travels to inspect international IAWRT projects.

From 2016 the chapter had to provide an escalating own share, from 5 – 10 % of the total budget.  This was a huge responsibility, as the existence of the whole organisation depended on our succeeding.  To our relief the obligations were more than covered by money from the organisation Fritt Ord (Free Word) for the long documentary project “Displacement  and Resilience” in 2017,  and  by Unesco Norway  for the Gender Mainstream project in 2018. The biennial in Manilla in 2017 was saved in the last minute.

In the spring 2018 a new contract was to be negotiated for the period 2019 – 2022. But new regulations had been decided by NORAD, and IAWRT could not meet the demands.  Support would now only be granted to projects in countries where FOKUS already has activities. IAWRT only has chapters in 3 of these countries, Tanzania, Uganda and Kenya. NORAD demanded that 50% of the budget would go to specific activities with target groups within FOKUS’ geographical priorities. Networks would not be supported.

IAWRT president Violet Gonda, treasurer Jola Diones-Mamangun and the Norway chapter head Kristine Ramm head tried to rework the application to meet the new demands but found it impossible to combine them with the nature of IAWRT.

The numbers of members fell in our chapter, and the 2019 SARS coronavirus did not help.

In January 2022 the chapter head contacted the 3 east African countries to mobilize a new project for the application for a new 4-year contract from 2024 – 27, that would also have supplied core funding for IAWRT International.

2 members of each of the African countries worked with IAWRT Norway to establish a project designed to fight FGM and early marriages in selected areas in the 3 countries. In addition 10 journalist were to be trained in gender sensitive reporting and digital safety, every year.

Our concept note was accepted in May, and the final application was handed in the 27 th of July. The rejection came in September.

The board of IAWRT Norway will review the strategies to see how they best can serve IAWRT in the years to come. 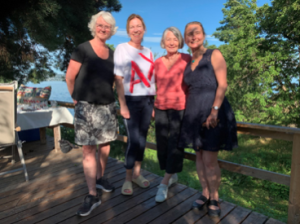 Annual report IAWRT Norway 2022
In February we suffered a great loss, as Gundel Kraus Dahl, died very suddenly and unexpectedly. She reached the respectful age of 89, mentally strong and present. Gundel was one of the backbone members of IAWRT, and thanks to her efforts IAWRT had a solid funding from Fokus for 20 years., she was an important resource and memory bank for IAWRT. Gundel was a member of IAWRT from 1970 and IAWRT was an important part of her life. She wrote so herself in the books he edited about IAWT history. May she rest in peace.

In April we had an open meeting in Oslo with IAWRT member from Moldova Alina Radu. Alina gave us a report on how her newssite has worked to reveal abuse of power and how the war in Moldova’s neighbour country Ukraine and the refugee situation has reflected on her people and her colleagues.

Two other important incidents occurred for us this year:
One new member, also elected to the board, found she had to withdraw both from her place at the board, and her membership in the organisation.

The other was the process of applying for Fokus funding for a new project in East Africa, A project that would In cooperation with chapter members from the 3 east African chapters Uganda, Tanzania and Kenya, the board worked 7 months with an application for Fokus funding of a new project in selected areas in the African countries. The application was unfortunately rejected in September.

Both these incidents have brought reflections and useful experience to the board members.

Some news outlets have a problem with their journalist being members of organisations that are not just pure journalistic organisations. It challenges their independence as journalist. Our member and her editor found it was not possible for her to combine. We have to respect this. Other outlets have different approaches. For some members this have never been a problem.

Some editors feel that journalism should never be used to promote – just to tell about reality and create awareness.

Probably the wording in our application to Fokus , that we

“Would use journalism to promote gender equality” was the tipping point.

We have not managed to replace this journalist at the board, so there are just the four of us, elected at the annual meeting in March.

We are all present here.

For 7 moths we worked with 2 members form each of the African Chapters, Kenya, Uganda and Tanzania on a new project.

Why these 3 countries?
They are the only 3 countries which have IAWRT chapters that correspond with the geographical area that the Norwegian Authorities have chosen for collaboration.

These two incidents have brought reflections to us:

The recent experience with the loss of a promising member because of crossing interests shows us that it might become even harder to recruit journalists as new members. We have to consider looking beyond journalist and filmmakers, and realize that what we can bring to the benefit of IAWRT is trying to get funding for good quality projects.