Historically, 2013 might be seen as the pivotal year for IAWRT-Philippines. It was the most challenging part of the chapter’s history, as it was the year when a couple of women decided to re-establish the chapter they vowed to serve after filling in their membership forms, way back in 2006 and 2010. In an effort to revive the chapter, at least seven women decided to invite new members, mostly from the alternative media, to join and led the first general assembly in August 2014. A new set of officers was elected and actively participated in the regional and biennial conferences of the International Association of Women in Radio and Television. These international meetings give the Philippines chapter an opportunity to share their status and to outline local media needs to international colleagues and friends. In the second quarter of 2015 we were able to define our vision, mission, and goals:

Subsequently, we were chosen to host the 2017 IAWRT International Biennial. In August, Jola Diones-Manangun was re-elected as President along with a new set of officers, ready for the challenge. 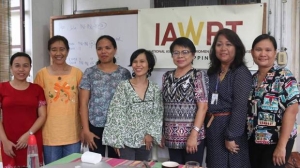 In November 2019, IAWRT Philippines supported the International Secretariat to launch its office and physical secretariat in the Philippines. Within a three-day program, the chapter also held another safety training and its general membership meeting to elect a new set of officers for 2019 to 2021. 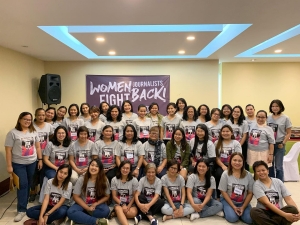 We envision a society where there is genuine freedom of the media with gender-sensitive and responsible journalism at its core.

IAWRT Philippines is committed to uphold and defend media freedom and educate and support women in media to promote responsible and gender-sensitive journalism.

Goals
By the end of 2025, more women in media will be responsible and ethical journalists, defending and upholding media freedom, promoting gender sensitivity, giving voice to the marginalized, resulting in a well-informed and empowered citizenry.

After more than a year of waiting, in August 2015, the IAWRT International Board approved the Philippines chapter’s proposal to build a community radio station in Eastern Visayas. (link)

Successful two-community training workshops were launched in October as part of the first phase of the project. A test podcast was also done on the eve of the second year of the Typhoon Yolanda (Haiyan) last November 2015 where ten-team of reporters and broadcasters participated in the two-day events. (link)

This Disaster Risk Reduction Mobile Community Radio Station is a four-year project of IAWRT-Philippines in cooperation with Kodao Productions and Eastern Vista scheduled to run until 2018.

Prior to the 2017 Biennial, the IAWRT Board conducted training with the people of Upper Patao on Bantayan Island in Cebu province and witnessed two narrowcasts. Click Read more about the visit, and see the film.

Chapter Activity
On December 7, 2015, IAWRT Philippines conducted a film-screening and workshop, featuring the film on reproductive health “Reflecting Her” in Senior Citizen’s Pavillion in Talisay City, Negros Occidental. It was attended by just under one hundred community women who are also members of Gabriela Women’s Network-Negros Occidental Chapter and Women on Environment and Climate Change Adaptation Network (WECCAN). Both networks served as IAWRT Philippines’ local partners in the activity.

The local organizers liked “Reflecting Her” so much that they requested for another film to be screened. IAWRT-Philippines then showed another IAWRT international film “Hands-on”. It received another enthusiastic response from the women audience and prompted another spirited discussion afterwards.

On December 8, IAWRT-Philippines was invited to a women’s radio program “Tungkaron Ta Ini” over DZRL Abian Radyo. The episode centered on the previous day’s activities: the film-screening and workshop. On theprogram, the Chapter President, Jola Diones-Mamangun discussed the film and what IAWRT is about and invited Negros Island women broadcasters to become members of IAWRT-Philippines. On air with her, Maria Clarizza Singson-Dagatan, Chairperson of Gabriela-Negros, discussed the women’s rights situation in the country.

The IAWRT Philippines team then visited the headquarters of the Negros Press Club to talk to both women and male members of the club about “Gender Equality and Social Justice in Public Media. They also gave out IAWRT Philippines brochures and left more copies for distribution to other members in the island.