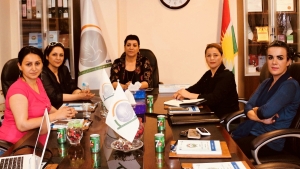 Under the leadership of Awaz Salim Abdulla, who first met up with IAWRT in Williamsburg USA in 2005, the Iraq Chapter has pursued the difficult road to formation, literally as often continued military conflict in Iraq has made travels to complete documentation and hold gatherings too dangerous.

In 2018 the chapter held it first official meetings and the Iraq-Kurdistan chapter was officially inagurated at the Entebbe Uganda regional conference in October 2018.

As part of the global 16 Days of Activism Against Gender-Based Violence Campaign in 2018 the IAWRT Iraq-Kurdistan chapter organized a special seminar on gender equality in media organizations, which debated the status of women in the media and the problems they faced because of their gender.

That was part of the IAWRT Gender Mainstreaming Project where many IAWRT chapters organised activities relevant to their region.