IAWRT Nepal was formed around the time of the cessation of 10-years of conflict, which claimed 16,000 lives. Its genesis was in December 2006 through a consensus reached by the forty participants of a national conference on The Role of Media Women in the Reconstruction Process. The Nepal chapter received its charter in 29th September 2007 at the IAWRT 32nd Biennial Conference held in Nairobi, Kenya.

Bandana Rana was the inaugural Chair of IAWRT Nepal chapter and served until 2015, she was also a member of the international board and an IAWRT Vice President. Then, in 2015, Anupa Shrestha was elected the Nepal IAWRT chapter head. Also, at the IAWRT Biennial in New Delhi in September 2015, she was elected to the international board of IAWRT until 2017. After her successful tenure, Montessori Rajbhandari took over as head of the Nepal chapter for the term 2017-2019. 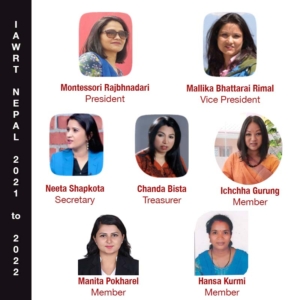