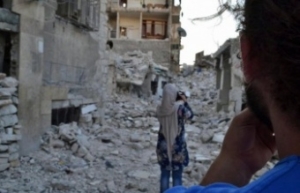 A 57 minute Film, Velvet Revolution is the 2016-7 IAWRT long documentary project. In this exciting collaborative film six women directors take their lens up close to women making news in a world riven with conflict and dictatorial regimes. When journalists are constantly under threat, what drives these women to do their jobs? 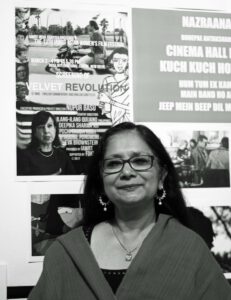 “The title is based on a suggestive metaphor of something being strong and deep but making impact in a quiet way …just as the women journalists featured in the documentary do” says the EP and Project Director, Nupur Basu (pic:right).

“I did not want to be a war correspondent… but the war came to my door-step” says award winning Syrian journalist, Zaina Erhaim (pictured above with her her husband acting as bodyguard while she works). She is now living in exile in southern Turkey. She is one of four four internationally known award winning journalists interviewed by Nupur Basu for the project . She also spoke with women journalists who worked on the Panama Papers investigation from India and the International Consortium of Investigative Journalists (ICIJ) based in Washington, USA.”

“As a woman journalist for three and a half decades in print and television, it has been a very meaningful journey for me to make Velvet Revolution along with four other great women directors . The documentary showcases the courage, determination and talent of some women journalists who are pitted against both state and non state players that try to curb their press freedom.” 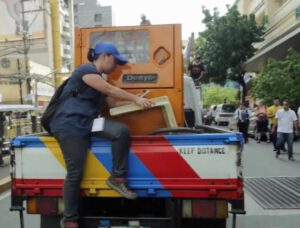 In the Philippines, for decades, one of the most dangerous contries for journalists, producer Illang Illang Quijano takes us to meet  a veteran media activist of the Marcos era, Inday Espina Varona who tells us “Journalism is truth-telling. To pretend to be neutral and blind to what is happeing around you. I think that is unnatural.”

Kimberlie Ngabit Quitasol, a young journalist (pictured left) says “The President is wrong when he says that journalists are being killed because they are corrupt – who corrupts whom,” she asks, “who holds the power to corrupt?”

The documentary profiles women journalists who have paid a high price for speaking truth to power. they include Bonya Ahmed,the Editor of Muktomona (pic: right) who was injured in  a knife and machette attack which  killed her husband, Bangladesh blogger, Avijit Roy. She continues activism reporting in exile, and gives her first ever documentary interview, saying,“Icould not leave my co-warriors in the middle of the battlefield.”

From Afghanistan, Najibu Ayoubi runs radio stations for the NGO, Killid media. From day to day she does now know whether she, or her journalists will make it to work, working, as they they do, despite regualar death threats, even before they get into the field to report.

In Cameroon, radio journalist Moussa Marandata (pic:left) reports from the front lines of conflict with Boka Haram, but even as station manager for CRTV Far North, she says that she continues to be challenged and belittled by men.

The film is very relevant in our contemporary times given the attacks on media the world over” according to Nupur Basu. “Perhaps that is the reason that the world premiere screening of Velvet Revolution in New Delhi on March 3 during the 13th Asian Women’s Festival was a huge success – the film resonated with the audience and there was an instant clamour to do more screenings everywhere.”

The documentary has continued to receive positive responses, a CSW-UN parallel event in New York in March, 2017; in Kathmandu organised by the IAWRT Nepal chapter, April, 2017; World Press Freedom Day in London for the Institute of Commonwealth Studies May 3, 2017; World Press Freedom Day, at UNESCO, New Delhi on May 3, 2017 and at Amnesty International, International Secretariat, London on May 10 , 2017. It won won the Best Film Award in the Feature Length Documentary section at the Kashmir World Film Festival.

In November 2017, the documentary was screened in Oslo, Norway to a Conference on the Safety of Journalist Covering Conflict and Sensitive Issues, before a screening at the IAWRT Biennial Conference in Quezon City, in the Philippines. Students at Bohol State University aslo saw it as part of an Orientation-Seminar on Gender Sensitivity, Violence against Women and Children and Sexual Harassment, facilitated by a Philippines chapter member, Sol Virtudazo. Velvet Revolution also premiered in Canada at Cinema Politica Concordia joined by IAWRT documentary committe member and documentary maker, trans-media artist, Professor Liz Miller. The event was co-presented by Fondation filles d’action – Girls Action Foundation, South Asian Women’s Community Centre / Le CCFSA, Afghan Women’s Centre of Montreal, Fédération des femmes du Québec and The Simone de Beauvoir Institute.