The gender mainstreaming project has made a significant contribution towards the analysis of gender equality in and through the media, in line with section J of the Beijing platform for Action, which pointed out the need to correct the stereotypical and often degrading depiction of women in the media and instead realistically present women’s diversity and contribution to society. There has been very slow progress.

The eight country study of public radio and television, lead by Greta Gober & Diana Iulia Nastasia, measured representation of gender and other social justice measures such as age, ethnicity, and sexual diversity, across four continents and eight countries. It has revealed that gender inequalities persist on both radio and television. Men account for a majority of those who speak in the public media across countries and continents. Additionally, there is little to no diversity among those who speak in the media in terms of sexuality, age, ethnicity, and ability. Besides the deep denial of the voice of women, female subjects are stereotypical and over sexualized.

Greta Gober is pictured with former President Racheal Nakitare at te report launch In New delhi, India. IAWRT is now working on plans to promote the report as a resource for gender equity work and as a basis for further action to promote change, through its various chapters. 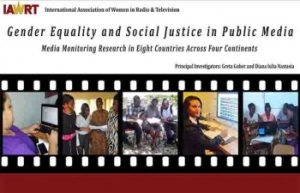