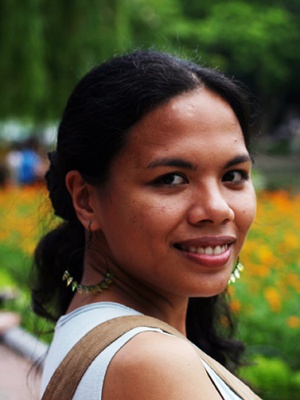 I am a journalist-filmmaker working in alternative media in the Philippines. I sit on the National Council of Altermidya (People’s Alternative Media Network), a national network of independent and progressive media outfits and institutions. Right now, I am involved in multimedia production (all stages of production from conceptualization, scripting, shooting and editing) and write feature and opinion articles for the Altermidya website. I am also involved in Altermidya’s training programs on video for social change, community radio, and citizen journalism. I am also a documentary filmmaker.

I started in journalism writing for our student publication at the University of the Philippines, Manila. As a student journalist, I co-wrote an article with my father, a doctor, on the effects of aerial spraying of pesticides in a community in Southern Philippines. The article was published in a national newspaper, and we got sued for libel. Click for more details. The case got me interested in writing about social issues. My first job was in 2002 as a reporter for Pinoy Weekly, a start-up weekly print newspaper that catered to marginalized communities of workers, urban poor, migrants, indigenous peoples, women and youth.  As it was independent media, I got to write freely on human rights, the environment, land rights, women’s rights, public policy and other pressing social issues. I eventually became the Executive Director of Pinoy Media Center, the publisher of Pinoy Weekly, and also ventured into documentary filmmaking, multimedia production, and citizen journalism training.

I received my Master’s degree in journalism as a fellow of the Konrad Adenauer Asian Center for Journalism. I am a past director of the National Union of Journalists of the Philippines. More recently, I studied documentary filmmaking through the Goethe Institute in Manila and Jakarta and got to participate in various film festivals in the Philippines and abroad. Right now I am also a board member of the IAWRT -Philippines Chapter.

The work is satisfying because you see and feel the enthusiastic responses of communities whenever we report or highlight their issues and concerns, which are mostly misrepresented or underreported by the corporate mainstream media. You become part of their empowerment. The most challenging thing is always the lack of income — as sustainability is always an issue in independent and non-profit media. Threats of harassment and censorship are also very real in the Philippines, and always a challenge, especially for alternative media practitioners.

I like the editorial independence and freedom in alternative media to report on issues that matter, and in ways that can lead to empowerment and social change. I like the fact that I can be enterprising, choose my own stories, and even contribute to other news outfits or look for other producers and partners for documentaries I’m interested in doing. The multimedia landscape is also very exciting—the technology to create powerful documentaries, web series, and other multimedia works is now more accessible, and there is a wide variety of forms that one can use, and experiment with, for storytelling.

What I do not like about the media industry is that in general, it does not pay well for independent journalists or even for its own employees. (That is why we work, not just on press freedom issues, but for the welfare of journalists as well.) I also do not like the fact that producers and editors are also frequently looking for content that “sells” and not necessarily content that matters.

My long-term goal is for the alternative media in the Philippines to flourish even more, especially in the provinces where it is badly needed by poor or marginalized communities. Personally, my goal is to train and educate more independent media practitioners and to help in establishing alternative media outfits. I’d also like to produce or direct more compelling and creative documentaries, and to write more narrative and investigative reports on issues that are close to my heart.

My advice to students is to be enterprising in their stores and not be inhibited by the traditional news beat system, or reporting solely within the confines of the corridors of power—which mostly manipulate the news agenda. Go to non-traditional news sources, seek out communities and people in their daily lives, and find out how public policies or social phenomenon affect them. Always be critical. Get to know the people you are covering as intimately as possible. As much as possible, give voice to the voiceless; afflict the comfortable and comfort the afflicted. For women journalists, my advice is that every issue affects women in special ways: find out how and you will have a story, most likely one that can only be told by a woman.

There is this quote that was used by student publications during the period of Martial Law in the Philippines; I think that it is still relevant today: “In the midst of a deafening cry for change in a society beset with inequalities, journalism cannot find a neutral sanctuary. Either it contributes to the prolonging of the night, or helps in the ushering of a new dawn. After all, to write is already to choose.”

Links to your media projects

Documentary: “Heart of the City” tells about the life-and-death struggle of Manila’s urban poor settlers whose homes are about to be demolished.
Watch here:

Documentary Trailer: “Daughters of Cordillera” tells the story of Piya, a young activist, who visits her hometown in Bontoc, Mountain Province, to reconnect with her indigenous roots. Watch here:

An opinion piece on human rights reporting published by the Center for Media Freedom and Responsibility. Read here: