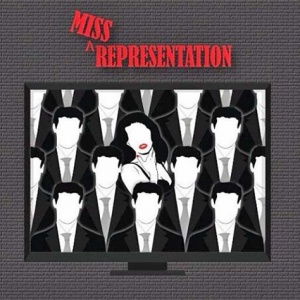 The Commission on the Status of Women (CSW) the principal global intergovernmental body dedicated to gender equality and women’s empowerment, held its 60th meeting in New York in March 2016. In the lead up, IAWRT International board members spent a hectic six days attending forums, and presenting our event, Exploring strategies to eliminate gender inequality in the media. 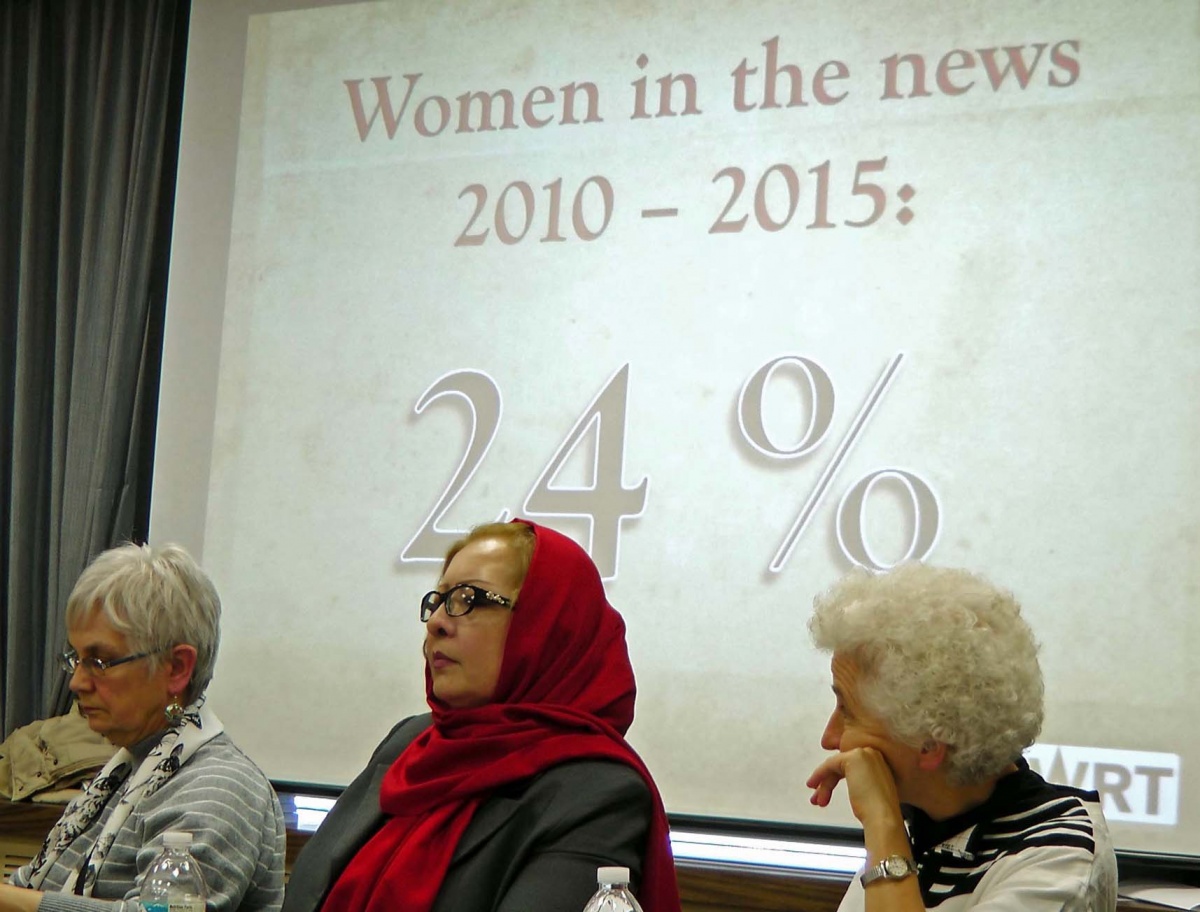 CSW has taken a leading role in monitoring and reviewing progress and problems in the implementation of the Beijing Declaration and Platform for Action,since 1996. It also advocates for the mainstreaming of gender perspectives in all UN activities. In its main session, UN Member States agree on further actions to accelerate progress toward women’s enjoying their political, economic and social rights. The outcomes and recommendations of each session are forwarded to the UN’s Economic and Social Council (ECOSOC) for follow-up. More details on its work is available here.

Non-government organisations, such as IAWRT can attend side events to the CSW, to engage with government delegations, and may organise parallel events outside the UN.

The IAWRT’s event was one of a smal number on media and it concentrated on strategies to reverse women’s under-representation and the continued use of limited and often exploitative or damaging stereotypes.

Before that presentation, Phumzile Mlambo-Ngcuka, Executive Director of UN Women, gave the opening remarks for the 2016 non-government organisations (NGO) CSW forum Consultative Day.  She said that despite some gains, challenges continue: including a lack of resources and often, access to basic resources.  She expressed concern about shrinking spaces for NGOs and Civil Society actors in countries where human rights were not upheld.

She also felt that many organisations were pushing in different directions and urged participants to be guided by the road map – the Sustainable Development Goals (SDGs). Phumzile Mlambo-Ngcuka says that civil society groups have a fundamental role in assessing the local relevance of SDGs, improving data collection and monitoring, and denouncing actors who don’t follow the agenda.

However there is a growing recognition, at least amongst media researchers and NGO’s, that the omission of media and gender is a large shortcoming in the Sustainable Development Goals. Hence the importance  of the IAWRT parallel event, on practical efforts within the media to get rid of gender inequality. It was held in a packed room at the UN Church Centre. 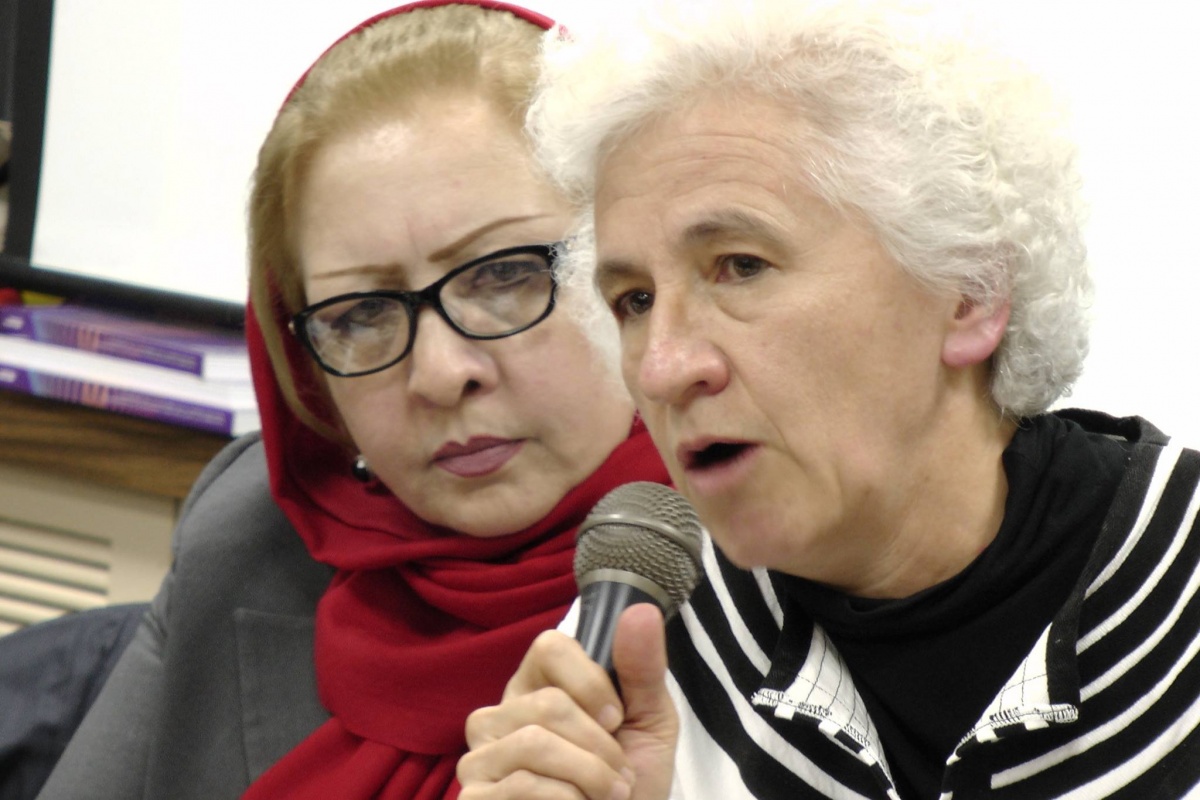 The Panellists were: Najiba Ayoubi the Director-general of Kilid media in Afghanistan, Gender Links CEO and Chair of The Global Alliance on Media and Gender (GAMAG), Colleen Lowe Morna (both pictured left) and Dr Carolyn M. Byerly, a Professor in the Department of Communications, Culture and Media Studies at Howard University (pictured right). The event was moderated by award winning journalist and IAWRT Norway Chapter head, Bibiana Dahle Piene.

Despite all the advocacy, lobbying and training, the fact remains that across the world, women are vastly underrepresented and misrepresented in the media at various levels.  The 2015 Global Media Monitoring Report estimates that if the current negative trend in gender equality in media continues, it would take 77 years before media equality is reached.

Opening discussions, Bibiana Dahle Piene, said that although women in Norway have taken up more important social, political and economic roles in society, they have continued to lose importance in the media. “In 2010, women constituted 19 percent of experts in the country, and at the same time, women made up 31 percent of news sources … five years on, women experts have risen by 1 percent, and women as media sources has dropped by 7 percent, within the same period.” 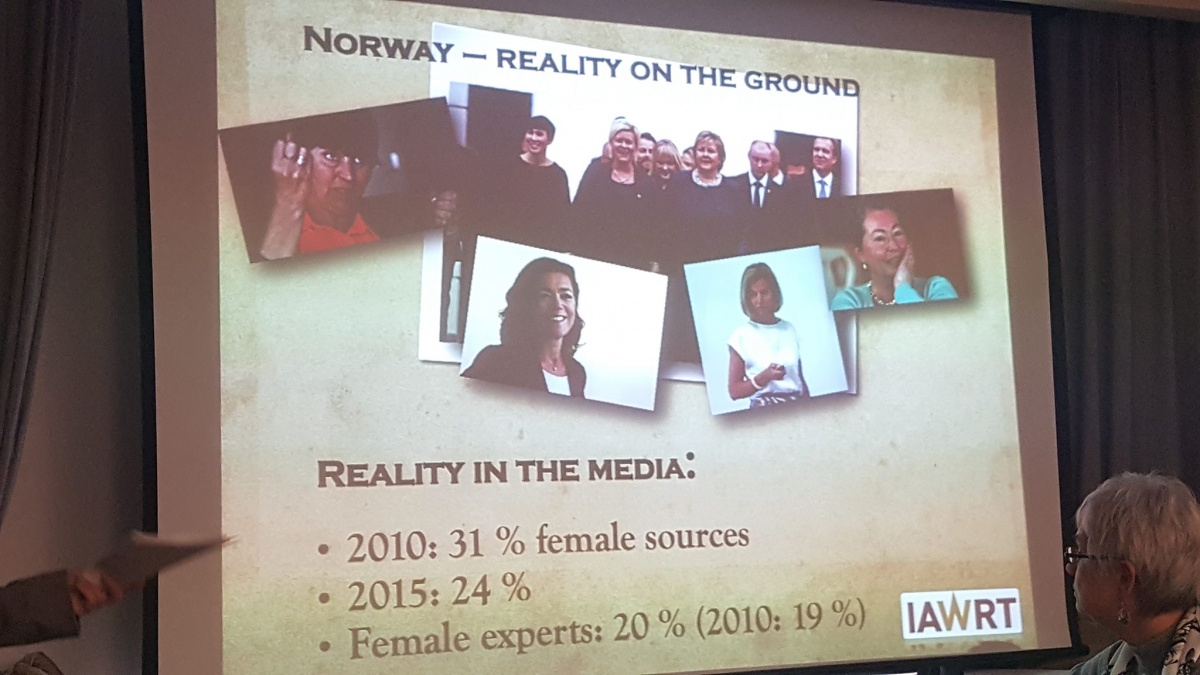 Dr Byerly, who is also co-founder of the Howard Media Group, says women have to challenge discrimination and feminist groups have to develop a new policy agenda on the media … she agreed with the suggestion of the moderator, that a big issue that should be given serious consideration, is gender becoming part of the curriculum in journalism programs. (Powerpoint of her presentation available below) 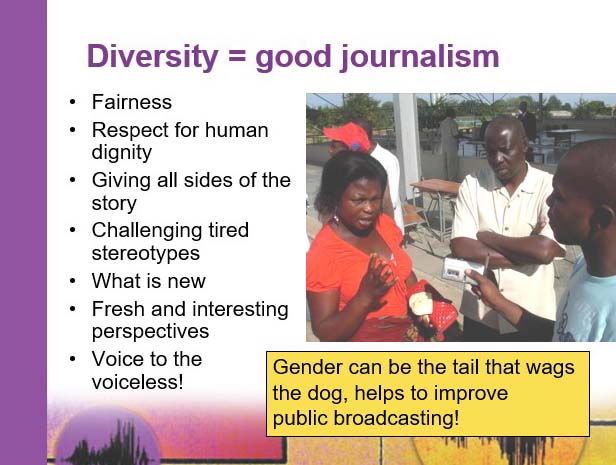 In a presentation entitled Gender and the Media: More pain, no gain?, Colleen Lowe Morna said women should be worried about gender and media not being clearly part of the Sustainable Development Goals, warning that it is a challenge to change attitudes, as the fight is against “the most powerful and the most evasive of ideologies – patriarchy” and there will be no success unless media is on side. She emphasized that women can only have voice and choice when they start being properly visible in the media (powerpoint presentation available below).

From the Afghanistan view-point, Najiba Ayubi said a starting point for much needed change lay in the fact that there are 90 TV stations in Afghanistan but not one is run by women.

“Women are mainly presenters and they are not involved in the content definition” she said, adding that security for journalists is a big problem. In Afghanistan she says the media space is still closed for women, the battle is also with a dominant social view that women’s role is said to be in the home.  Ayubi says 10% of women have left media in the latest upsurge of violence. The multiple award winning journalist has personally experienced a number of terrifying moments, including gunmen at her house, defamatory attacks in state-run media, and lawsuits by politicians.

A former IAWRT Vice President of IAWRT Bandana Rana attended, (pictured left) and contributed to discussion. Like Najiba Ayubi, she highlighted the challenge of cultural attitudes in working on violence against women and children in Nepal. People in Nepal she said, argued that what happens in the home is a private matter, but women were learning that they didn’t have to stay in abusive relationships.

She said when a boy is born, the family would “…cut a goat for celebration of the birth. When a girl is born … they cut a pumpkin”. She would like to see the birth of girls celebrated. Earlier, at the NGO consultative Day she had given a very powerful keynote speech, as one of two awardees of the UN/NGO CSW Women of Distinction Award.

In her earlier career as a TV journalist, she spoke about how she had failed to get women to talk about their domestic violence experiences. Even when she put the questions to a woman it was her husband that talked. Her practical solution would be to start very early in the morning to look for the women when they were fetching water alone. Only then she found that the women had much to share about their situation. 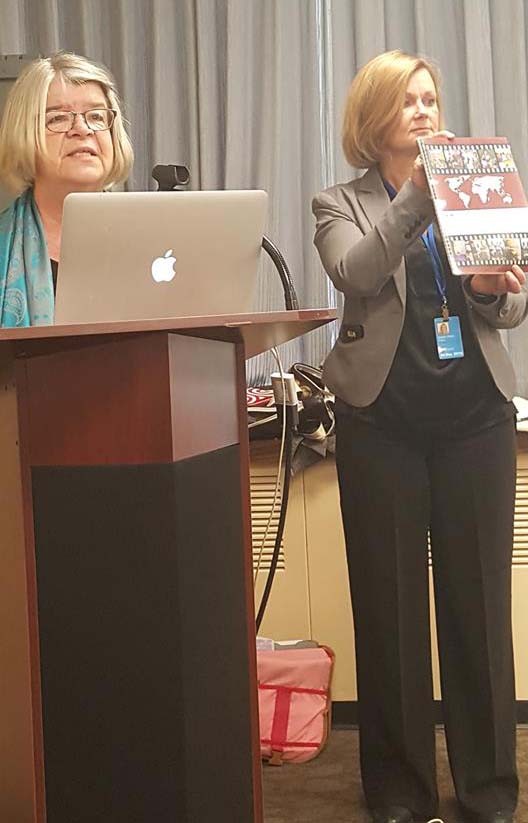 The IAWRT presented its Gender media monitoring report, which covered four continents and eight countries, parallel to last year’s CSW, and the IAWRT President, Gunilla Ivarsson, said this year’a session was about such making use of practical strategies. “Now is the time to go from words to action, to explore and share strategies – to go hands on for change” she said. (pictured left with moderator, Bibiana Dhale Piene, holding the 2015 report).

Board members also had an opportunity to view and discuss different media initiatives which aimed to witness injustice and empower women around the globe to gain an equal role in society. Presentations included: efforts to empower Kenyan women to use technology to report sexual violence or rape – Women and Technology: Effective video documentation of sexual violence; Developing an Islamic response to speak out against gender based violence; The Oscar winning film: A Girl in the River: The Price of Forgiveness – about an eighteen-year-old Saba woman in Pakistan sentenced to death by so-called honour killing; a panel ‘Empowering women to end hunger’ with delegates from Kenya, Israel, the Ukraine, Honduras, Bangladesh and Columbia; Refugees and displaced people, victims of terrorist groups where Nadia Murad Basee Taha a Yezidi woman and ISIL victim – gave her recommendations to the international community on strategies to women and girls exposed to a continuum of sexual violence and exploitation.

Other key themes discussed were the incessant issue of the trafficking of women and girls, and the importance of women’s participation in governing society. A Women in Parliament discussion concluded that quotas are really important to secure seats for women in parliaments. According to the UN Development Programme, when women have 30 per cent of the seats or more, parliaments start passing laws that favour gender equality.  However such elected women need to work twice as hard as men to keep their positions in power, so strong networks are needed so that they can secure competence building, once elected.

Media is a powerful actor that can contribute to gender equality and peace. When media women have the space, they can tell important stories about women, and demonstrate leadership. Giving women more space is just what IAWRT is about!