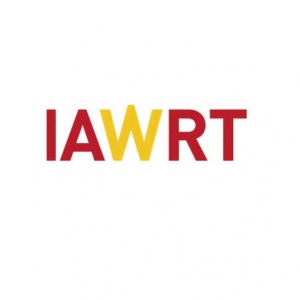 2017 is election time for the 7 positions on the IAWRT International Board.

The Nominating Committee is now receiving nominations for President, Vice President, Secretary, Treasurer and three members-at-large. Elections will be held at the members meeting at the Biennial conference being held from 9 -11 November 2017 in the Philippines.

The Nominating Committee has the responsibility of preparing a balanced proposal of suitable candidates for the 2017-2019 term of the international board . That proposal, along with all nominations, will be presented and explained at the members meeting at the Philippines conference. It will also be emailed to members beforehand.

Additional nominations can be made from the floor during the membership meeting. Elections will be conducted according to IAWRT’s current statutes.

Contact [email protected] if you need to renew membership. NOMINATION FORM attached below.

The deadline for sending this nomination form is 20 August 2017. 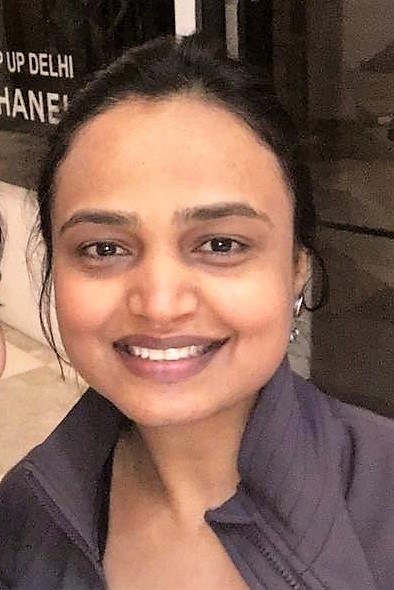 In 2017, the IAWRT awards for excellence, will be presented in the Philippines where they began, when the Biennial returns to that country, hosted by a renewed local chapter.

Fittingly, the 2017 Awards have been revamped to better reflect the rapidly changing media world, with revamped categories,

Media and women in changing times

The IAWRT Awards have been integral to the IAWRT’s  international biennial conferences since 1994, when Mette Janson, from NRK, Norway, and Christina Ruhnbro, from Swedish Radio, planned and coordinated the first TV awards.

Arshiya has a hard act to follow after more than a decade’s work by the indefatigable Gerd Inger Polden, , from Norway, 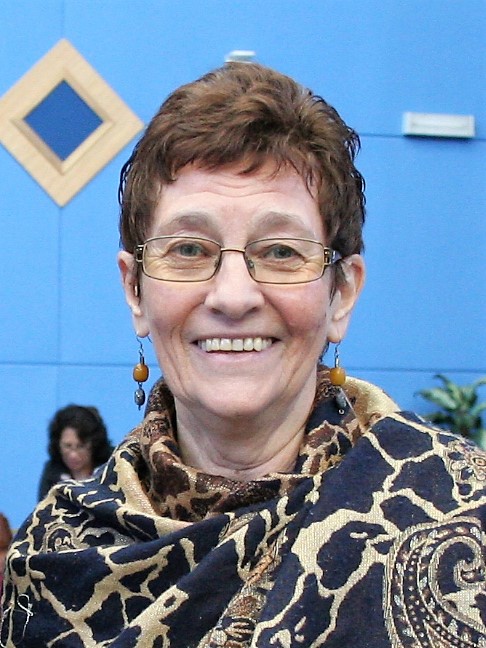 (pictured right) She worked on the awards from 2003 and officially took as coordinator in 2005 after the death of Mette Jansen.

The Awards had grown to include radio documentaries, and during Gerd Inger’s 12 years, as the pace of change to the media landscape and platforms escalated, they were modernized again by including two more categories, eb video and web audio documentaries.

IAWRT President Gunilla Ivarsson says Gerd Inger coordinated the IAWRT Awards almost alone, and often in combination with other IAWRT responsibilities. “She has generously shared her experiences, dos and don´ts and given constructive feedback. Thanks a lot Gerd Inger, it is thanks to you, who took up the gloves after Mettes death and had the energy to go on and on, that we today have a solid ground to stand on.”

Gerd Inger Polden says it was the most rewarding and inspiring work she did for IAWRT. “I want to  thank all the jury members for their enthusiasm, competence and hard work. Together we have made the jury work capacity building” she said “I thank IAWRT for 12 years of gratifying work”.

This capacity building will continue with jury presentations and discussion at the 2017 Biennial, which will be shared on more platforms.

Arshiya Ashan is one of the founding members of the IAWRT-USA chapter and a communications professional in the not-for-profit sector. She says she’s excited about the opportunity to build the next phase of the IAWRT Awards.

“I feel humbled to take on this role from Gerd Inger, who has been truly inspirational in her work, and instrumental in shaping the awards in the last decade.”

From 2017, rather than dividing productions into formats such as radio or television or online, the awards are based on three new categories to reflect the constant merging and emerging of media forms. The categories are; Social Impact, Innovation, and Emerging Talent.

One IAWRT awards committee member, Liz Miller says the intention of the new categories is to try and break down traditional barriers between media genres, “… and open up more dialogue amongst each other about new directions in the field and the impacts of the media we make.”

“Radio, television programs and traditional documentaries are welcome they will simply be viewed in a larger media context. There will be some very challenging but exciting debates for the jurors!”

Arshiya Ashan says a streamlined online submission process will be a key to making it easier for the filmmakers, producers, and jurors. “I also hope to build a social media platform for the awards with an emphasis on film festivals, funding opportunities, and other media content — both for sharing and archiving.”

IAWRT international members are involved in everything from community radio to high end state broadcasters, to filmmaking and cutting edge media forms. Our juries will continue to deal with the challenge of judging projects made with very little resources against high budget productions.  Projects will be evaluated based on the bravery of journalists/producers, storytelling innovation and the potential impact of their works to shift attitudes and have some impact on the lives of women.

A critical part of the awards is offering IAWRT members a chance to discuss how technological shifts are presenting new possibilities in our respective fields and the opportunity to discuss and explore the ethical implications of convergence.

The jury will present the winners at the biennial  conference and share highlights of what they have seen with the members. “The awards offer a chance for our members to see how our field is changing before us and to consider how we can ensure that we are at the forefront of shaping those changes” Liz Miller said.

The three categories are named  after long serving IAWRT officer holders who have passed away, who were leaders and innovators in their respective media fields during their lifetimes.

The Social Impact Award – the Laila Doss Award is named after Egypt’s first woman broadcaster and first female UN Assistant Secretary General.  This award recognizes programs which have the potential to change women’s lives. The project may feature female protagonists piloting groundbreaking responses to systemic gender oppression or alternatively the media project may have the potential to shift policy, change attitudes or be used to advance dialogue, education and awareness.

The Innovation Award – the Mette Janson Award is named after the documentary maker who caused uproar in Norway with a 1969 series on sex and contraception and was a leader in reporting gender perspectives in the media. This section looks for productions which demonstrate innovation in form, story, and or interactivity with the general public.

The Emerging Talent Award – the Jai Chandiram Award, named after the former deputy director general of Doordarshan (all India TV) and a media teacher and academic. This award is open to students and/or first time documentary makers and looks to award emergent filmmakers who are taking risks and bringing new and fresh perspectives to diverse publics.

“The Awards are a unique chance to see the range of work women are making around the world, and to recognize exceptional work in the field” according to Arshiya.

“Importantly, they are also a wonderful opportunity to bring our membership together, and inspire creativity in an amazing cross-cultural global setting.”

Entries are now open, the deadline for entries is October 2nd  2017. details and entry forms in awards section of this website. The winners will be announced at the Biennial conference, November  9th – 11th 2017, Quezon city, The Philippines. 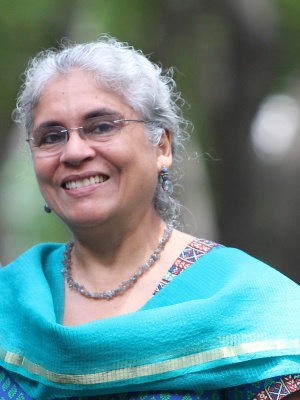 I enjoy working on documentaries that explore the space of indigenous knowledge systems in India. For the past few years, I’ve been working in Kutch, Gujarat, in Western India, documenting Sufi and other local traditions of music and storytelling.

I also teach in the MA in Media and Cultural Studies at TISS, and supervise Ph.D. scholars. I mentor a lot of student documentary work. I research and write in the broad areas of media and cultural studies, documentary film and censorship and have been active in campaigns for freedom of expression. In all these areas I work closely with my colleague and partner Prof. K.P. Jayasankar. We’ve been working together since 1985.

I began working with the media for social change about 40 years ago, landing up in TISS in 1983, where I was involved in creating the media centre that is now SMCS.

I enjoy interacting with people from local communities, listening to them and telling their stories collaboratively. I love working in a team. I also enjoy working with young people, from whom one learns a lot. I find management and administration challenging and would prefer to focus on creative and teaching work!

What do you like and not like about working in this industry?
I love being in the teaching and documentary filmmaking profession. There is a lot of freedom that we enjoy to create, inspire and to share. There’s nothing I dislike about it.

My ability to work in a team, my love and respect for people and my passion for storytelling, and my ability to write and to structure material, both written and visual.

I am a relatively new entrant to IAWRT and I enjoy working on the team as a member of the Board of Trustees in India. I AWRT has helped me meet interesting colleagues doing wonderful work and watch some amazing films!

To produce films that share indigenous knowledge, that represent marginalized voices and hopefully inspire others. To write books that make a contribution to knowledge. To share my insights and to learn from young people for as long as I can.

Be open, compassionate and always ready to dialogue with others. Allow your creativity to flow without inhibition. Don’t be afraid of making mistakes. Always stand up for justice and freedom of expression.

We live in an increasingly unequal world and the media is a part of this injustice and inequality. Each of us has to find our own ways to resist this and to try and make a difference.

links to some of Anjali’s work. 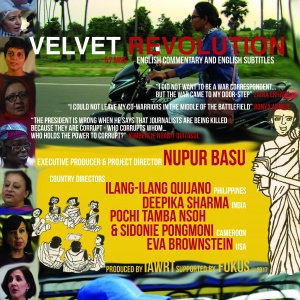 The IAWRT’s 2017 documentary, Velvet Revolution, has been selected as best film in the Feature Length Documentary section.

Velvet revolution was selected as the winner in July at the Kashmir World Film Festival. The documentary is about the challenges that women journalists face in covering regions in conflict. More details and trailer here.

Nupur Basu, Executive Producer/Project Director of the film, says “The 57- minute documentary, Velvet Revolution, reinforces the fact that there is no longer a red line when it comes to killing of women journalists. Women journalists, like their male counterparts, are also increasingly under attack by state and non- state players as they are doing their jobs. As women, they are exposed to ‘double attacks’ – their personal safety is increasingly under threat and the attacks on them through social media are getting nastier and misogynistic.”

In this exciting collaborative film – Velvet Revolution – six women directors take their lens up-close to Women Making News. In a world riven with conflict and dictatorial regimes where journalists are constantly under threat of both, state and non – state actors, what drives these women journalists to do their jobs? Women journalists from Philippines, Syria, Afghanistan, Cameroon, India, United Kingdom, USA/Bangladesh give their testimonies in this film.

“I did not want to be a war correspondent… but the war came to my door-step” says award winning Syrian journalist, Zaina Erhaim, now living in exile in southern Turkey.

“I could not leave my co-warriors in the middle of the battlefield” says Bonya Ahmed, the wife of slain Bangladesh blogger, Avijit Roy and the Editor of Muktomona, in her first ever documentary interview.

The rivetting documentary profiles women journalists who have paid a high price for speaking truth to power like those in the Panama Papers investigations.