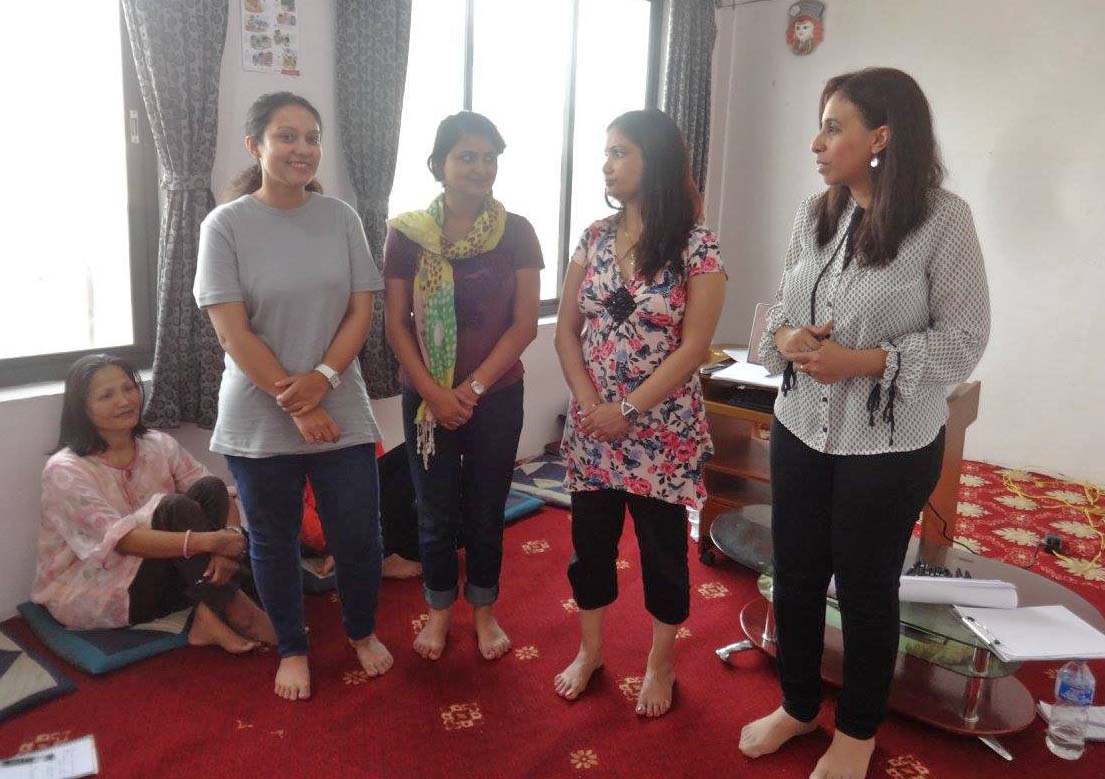 Egyptian journalist, and IAWRT board member, Abeer Saady, has delivered safety training to journalists working in hostile areas in numerous Middle Eastern countries over many years. She has shared her long experience and skills in safety training at IAWRT gatherings in India and Nepal and most recently at the Johannesburg regional conference in South Africa in October 2016.

As a female in journalism, the Johannesburg workshop provided an opportunity to discover the best ways to deal with a wide range of safety concerns. A wealth of knowledge was shared, and it was very refreshing to hear the different experiences of all the ladies who participated in the workshop.

Abeer presented us with a visual representation of a technique to assess our safety situation.

The triangle, pictured right, was designed to show how we must thoroughly assess any situation, to determine how we can behave in the safest way:

This relates to the safety of one’s person. For example, if you are traveling abroad, have you made provision for things like any medical concerns, such as contracting a virus. In addition, have you given thought to how you are going to be traveling; where you will be; and do you have plans in place for unexpected happenings, e.g. what you would do if you were involved in a car accident?

As part of physical safety, we also had a lengthy discussion about the type of attire that one should wear. It was shocking to learn that in certain countries female journalists are intimidated by being stripped naked so that they don’t get to cover the story that they are after. Attire is a part of profile management – both physical and digital – which Abeer says is a crucial element of a female journalist’s safety. 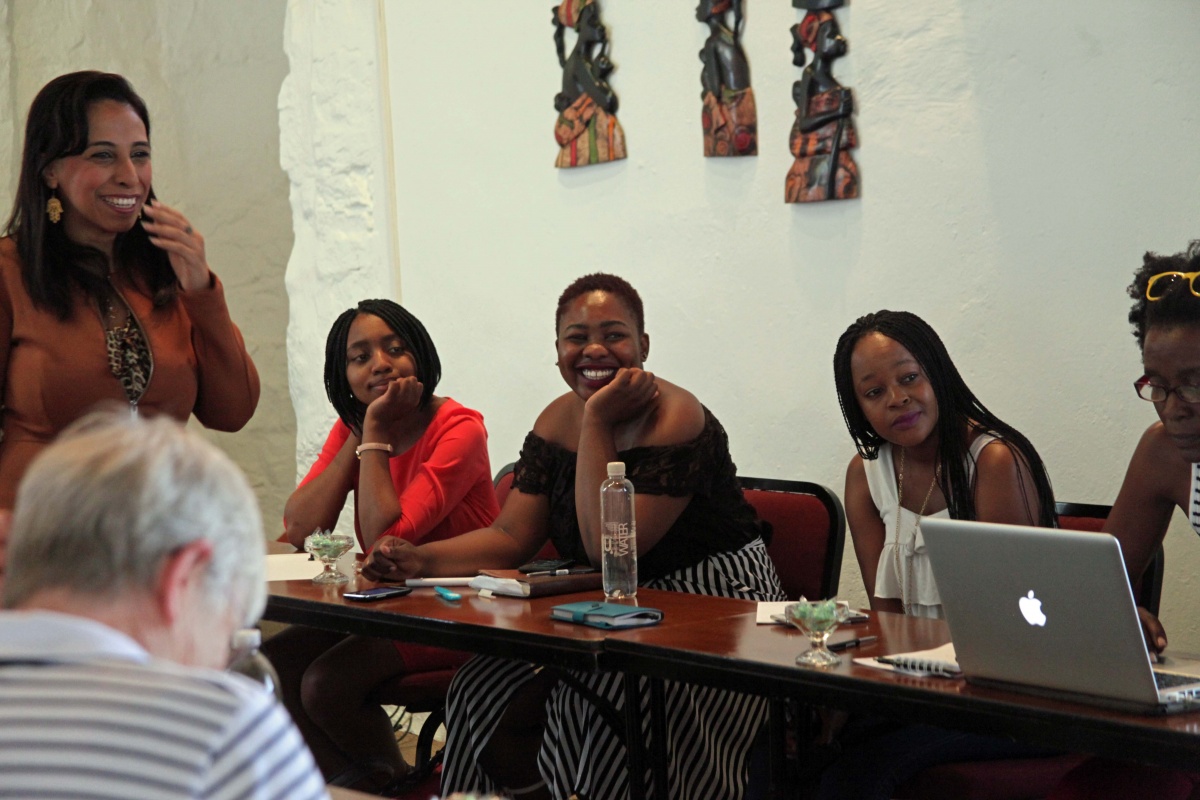 One of the suggestions was that a jumpsuit type outfit would prove to be a safe option female journalists, particularly in a crowd, just in case they happened to find themselves in that situation. We all laughed in unison at the realisation that that would make it very interesting when the time came to visit the bathroom!

It was also very interesting to learn that even though the female body is targeted for intimidation, (hate speech, including threats of rape or physical harassment, as well as defamation of a sexual nature which can destry careers in some local contexts) it can also be used to enhance safety.

In some countries, female sex workers have been paid to create a human chain as a buffer between Police and journalists. If the Police advance to stop the journalists or to confiscate their footage; the female sex workers strip naked and the police, who are predominantly male, stop dead in their tracks and cannot proceed any further. This is either because of the shame of female nakeness in some countries or the potential that security forces will be accused of having stripped female protesters.

This relates to matters around the support structures which you have, to prepare you for the reality on the ground, wherever you are. For this purpose, our brilliant facilitator, Abeer Saady made the simple yet effective suggestion of having a ‘circle of trust’ amongst peers and colleagues.

These would be the people that you would tell where you are going, where you are staying, how long you will be away etc. From within this circle, you would also choose someone to tell when and where you’re going to meet sources; as that is a very sensitive matter for both you as the journalist as well as for the safely of the source itself. This inner circle would also act as an independent monitor of your psychological well-being; effectively they ask the question, are you OK?

Another important element towards avoiding anxiety would be for you to forge relationships with the local journalists, in the place you are traveling to. They are likely to have a much better knowledge of the location or locations where you will be and they can assist with you in creating maps of where everything is located. In addition, they will also be the best to advise on various possible rendezvous points and where the safest place to go might be, if the situation escalates and the safest option is to leave the scene completely.

This was also a thrilling element of the safety triangle. In this technological era where we are all on at least one social media platform, we were reminded to not disregard how checking in to a certain venue, stating which airports you’re traveling through, or which hotels you stay in, is a very serious security threat.

It is on social media platforms that we have and manage our profiles, and whilst what a ‘badged’ journalist’s reports may make her a target to some interest groups, there are sensible ways to manage our profiles which make us a smaller target.

No story is worth your life

We had a lengthy discussion around when it is time for a journalist to leave the scene completely! Our facilitator was very clear about no story being worth your life. She even shared with us that she had her jaw broken and had to have multiple surgical procedures to correct that injury. Abeer Saady says there are situations where it is best to protect yourself by allowing your equipment to be taken.

This also lead us smoothly into discussion on what type of equipment is most appropriate for which situations and how as a journalist you may best use that equipment so that you remain as far below the radar as possible.

I recall that it was at this stage that it became most apparent to all of us that the triangle is crucial and not one element of it is more important than the other  … They are all crucial.

One of the workshop guests shared her traumatic experience of getting into a physical altercation with airport security, as they wanted to confiscate her technical equipment. We used her experience as a case study.

As we were all listening attentively we realized that her situation was a mix of physical safety and psychosocial safety. She had realized very quickly that the situation was escalating and had given a clear instruction to a male member of her team to walk out with all the equipment. The male colleague resisted and by the time he wanted to leave, it was too late. He then handed over the camera, which we were advised was the best thing to do, but as the owner of the camera, the woman resisted -leading to the altercation. She managed to save the camera and then the security proceeded to go for her light. It was at this stage that she, production light in hand, was physically picked up by the security in order to remove her. It was an essential lesson in the sensitivities required when dealing with gender relations in your team.

The last activity for the day was what was called a ‘grab bag’ exercise. For this we were broken up into two groups and we had to create a scenario in which we could demonstrate that we could now apply all the things that we had learned.

The grab bag is meant to be the one resource that you may pick and take with you in an emergency. We thought it would be simple enough, because our facilitator had done such a great job with the knowledge transfer. We soon realized that it wasn’t as simple as it looked.

Between traveling documents and credentials, we also looked at having sanitary towels and medical equipment. In addition, having enough to keep warm but not so much that your grab bag become a pull suitcase… It was a process to understand what is a necessity and what is just what we want.

Perhaps the most valuable learning curve of that exercise was the situational assessment that we went through. Looking at both scenarios we realized just how many players were in each scenario and therefore all the mindfulness with which we had to approach each and every situation.

Police arrest an editor and raid offices of a popular East African website, Jamali forum, in an attempt to identify contributers.

Maxence Melo, the co-founder of the media outlet was released on bail after a few days, but immediately after his arrest and a raid on the Jamali offices, the Committee to Protect Journalists called for Melo’s immediate and unconditional release CPJ media release.The Collaboration on International ICT Policy for East and Southern Africa (CIPESA) reported that he faced three charges: management of a domain not registered in Tanzania and two charges for obstruction of investigations. It also called for Melo’s release Media statement.

CIPESA reports that Maxence Melo was released on December 19, after being held at a police station in the Tanzanian capital Dar es Salaam. He was granted an interim release with six individuals standing as surety for a bond amount of 6 million Tanzanian shillings (USD 2,700).

Tefo Mohapi the CEO of iafrica.com says the forum and whistleblower’s site has a history of exposing Tanzanian corruption.

Melo was charged under the 2015 cybercimes law which has been widely criticised because of its potentital impact on media freedom. It is currently under challenge in Tanzania’s courts as being unconstitutional.

Melo’s lawyer, Benedict Ishabakaki, told the independent newspaper,The Citizen, that police detained his client for interrogation regarding a case which police had filed demanding his cooperation in determining the identities of several users of the online forum who have written about issues such as corruption.

The website reported that police raided its office, questioned employees about their duties, and took two additional employees, whom the website did not name, to a police station for further questioning. Jamii English coverage here.

Founded in 2006, Jamii Forum is  a popular online discussion sites, and hosts frank debates about such topics as graft in the public sector and government incompetence, mostly in Kiswahili. 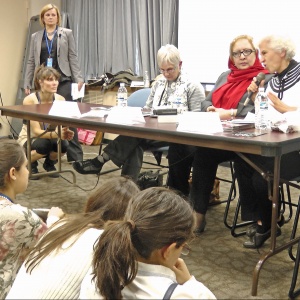 Planning for the NGO gathering parallel to CSW 61

IAWRT has begun planning for its event in New York, alongside the 61st CSW being held between 13-24 March 2017 in New York, USA..

The official main theme for CSW is: Women’s economic empowerment in the changing world of work. CSW will be reviewing challenges and achievements in the implementation of the Millennium Development Goals for women following the Agenda 2030 commitments made at CSW 60. CSW has nominated the empowerment of indigenous women as its emerging issue, or focus area.

To reflect the CSW main theme, at this stage the working title for IAWRT’s presentation is Women Making News in the Changing World of Work. This will most likely be based around a screening of parts of the 2016-2017 long documentary Women Making News with Nupur Basu, the Executive Producer, leading a panel discussion.

IAWRT President Gunilla Ivarsson, says “CSW is an event where experts from across the globe assemble and deliberate on issues concerning women. The event provides an excellent opportunity for the Member States, UN entities, and NGOs to discuss themes of the Commission and other critical gender equality issues, and to network.”

in 2016 alongside CSW60, IAWRT’s well attended event was entitled Explori 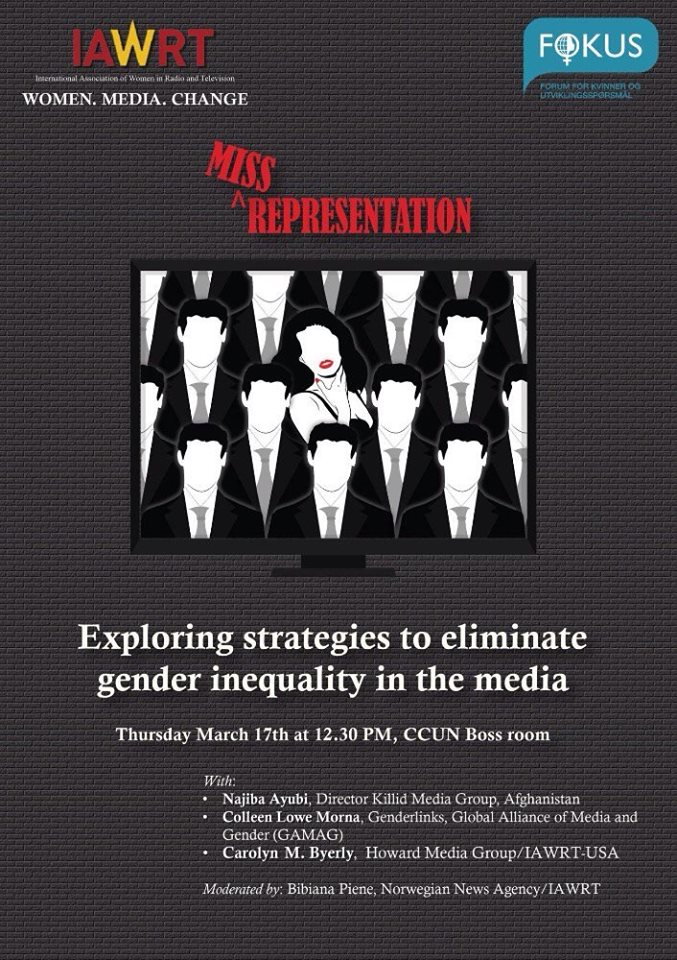 ng Strategies to Eliminate Gender Inequality in the Media. The panelists were:

A report on that event, To 2030:”THE BIG STRUGGLE IS CHANGING ATTITUDES” is available here.

IAWRT members who wish to attend this years events under the IAWRT umbrella, as self-funded participants should contact secretariat @iawrt.org as soon as possible and no later than the first week of January 2017.