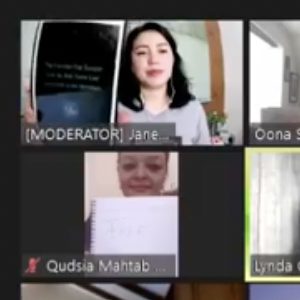 This was in response to the many human rights violations worldwide that put the lives of journalists at risk.

On May 3, the International Association of Women in Radio and Television (IAWRT) in partnership with the Journalism and Media International Center (JMIC) of Oslo Metropolitan University, and in collaboration with UNESCO Jakarta held an online protest action on May 3, World Press Freedom Day (WPFD).

A year into the pandemic and the infodemic that surrounded it, journalists and press freedom continue to be under attack. 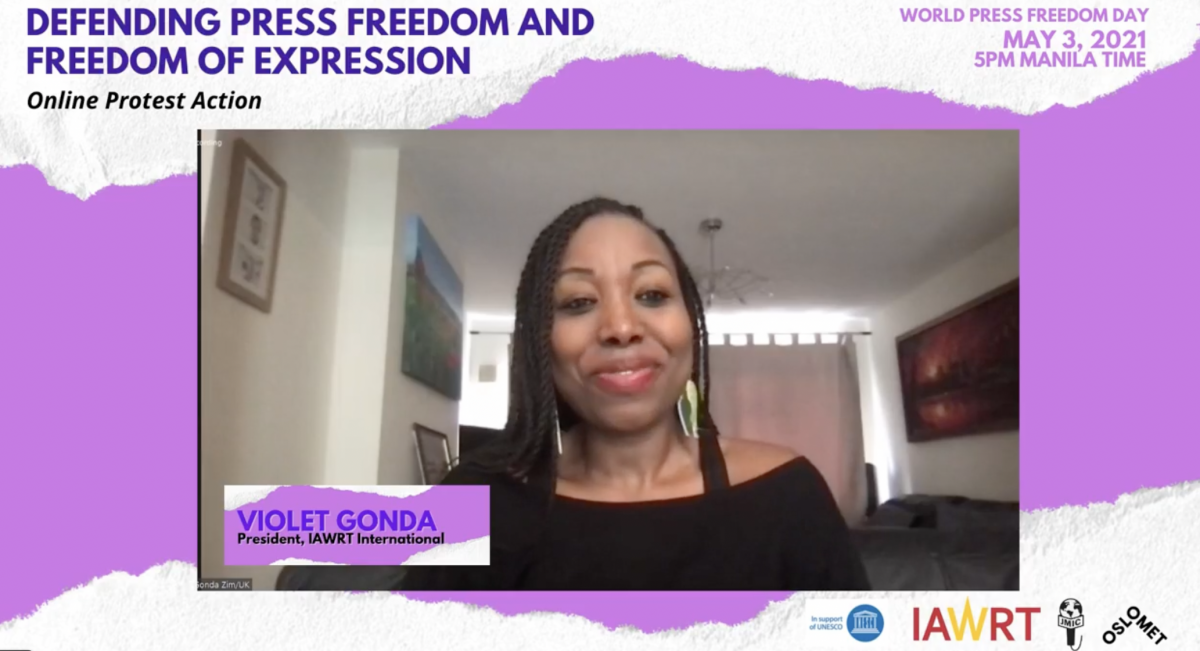 IAWRT President Violet Gonda shared how IAWRT’s own network had not been exempted from these violations.

Enikass Radio and Television reporter and IAWRT Afghanistan member Malalai Maiwand and her driver were killed on December 10, 2020. On the same day, Manila Today editor and IAWRT Communication officer Lady Ann Salem was arrested on planted evidence and trumped up charges that were dismissed on February 5, leading to her release on March 5. However, Eastern Vista editor and IAWRT Philippines member Frenchie Mae Cumpio is still detained since February 7, 2020 on similar patterns of arrest and charges as Salem.

“The harassment of journalists not only affects media practitioners but shortchanges citizens who depend on the media to provide a critical service in society – denying people to access to truth which is a very sad reality,” said Gonda. 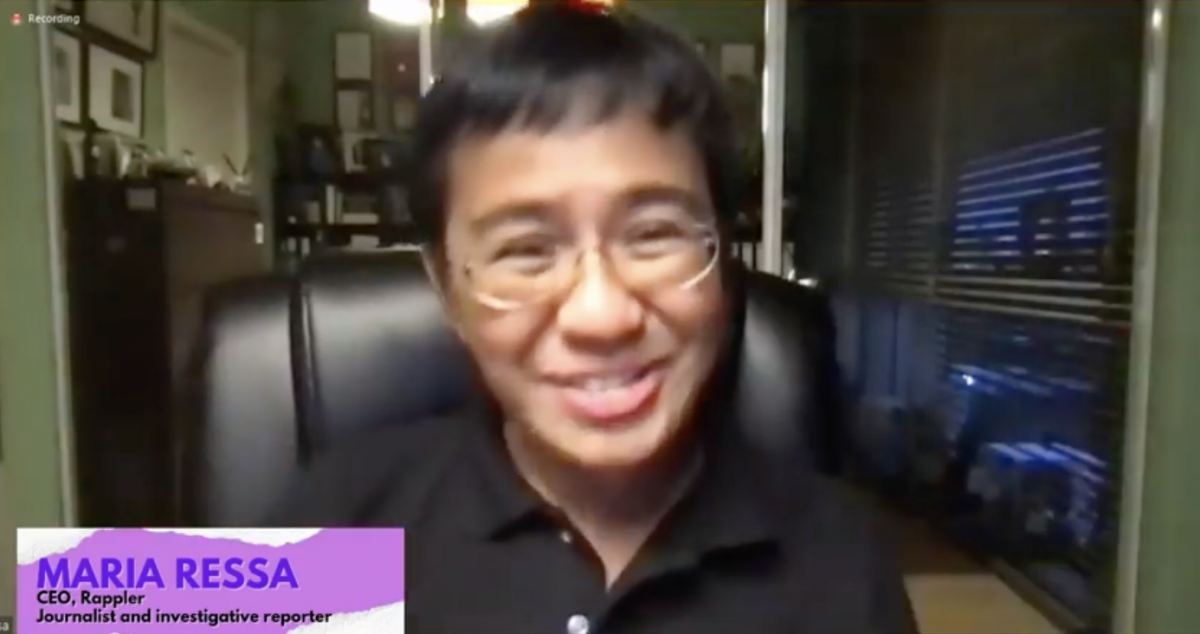 Rappler CEO and the 2021 UN Guillermo Cano Press Freedom Prize laureate Maria Ressa stressed, “It has never been as tough to be a journalist, to carry out the mission of journalism, to hold power to account. It’s never been as tough, as dangerous, as risky as it is today.”

“We have to hold government to account and that was why I was targeted with 90 hate messages per hour,” started Ressa as she recounted her continuing ordeal with the Philippine government under President Rodrigo Duterte.

“In 2017, President Duterte attacked us in his State of the Nation Address, a week later I got my first subpoena. In 2018, the government filed 11 cases and investigations against us. In 2019, I was arrested twice in a 5-week period, they detained me overnight just the kind to help me feel their power,” shared Ressa.

Ressa said she has posted bail 8 times in 2019, as the criminal cases moved on. She thought the government had mean to bankrupt them, but their community pulled through.

“And this is why it’s wonderful to listen to women all around Asia, because that’s the community we have to pull together to get through this, let’s call this the valley of death,”

Ressa shared she was convicted of cyberlibel in 2020 for “a story that was published 8 years earlier, at a time when the law we supposedly violated did not even exist, for a story I did not write, edit or supervise and for that I could go to jail for 6 years.”

Her lawyer Amal Clooney said she could go to jail for 100 years with all the cases that have been filed against her.

“We cannot leave ourselves feeling down, we cannot get dragged down by the world we live in now. Because part of the reason we became journalist is that we want justice, and we want a better world,” stressed Ressa. 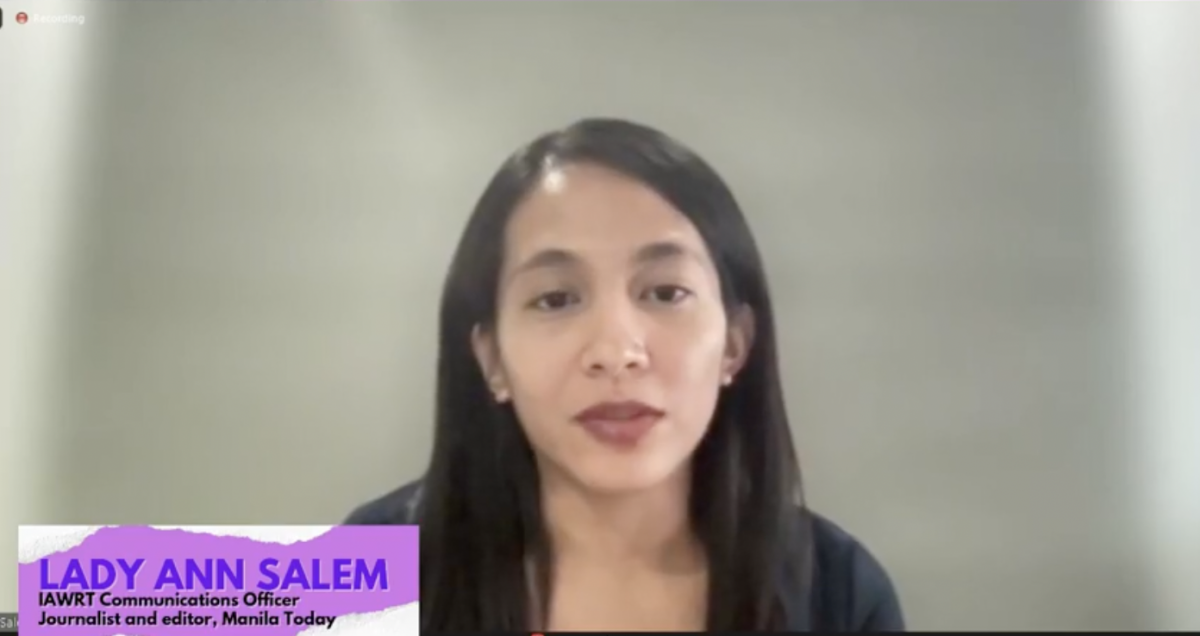 As one of five main speakers in the program, IAWRT Communication officer and former political detainee Salem shared the experience of her December 10, 2020 arrest after being red-tagged by the government.

“In the Philippines, at least 19 journalists have been killed under the current administration and a culture of impunity persist in these crimes. On the one hand, it is journalists and media outfits—not the perpetrators of the journalist killings, the political killings, the tokhang killings—it is Maria Ressa, myself, Frenchie, who are made to suffer weaponization of the law or the abuse of law enforcement,” said Salem, relating her experience to the general situation of journalists in the country.

Salem was freed on March 5, 2021, after the court threw out her cases on February 5.

“Being able to join you here today, almost two months into my release from jail, teaches me that we remain free because we believe in being free and we insist on being free, as colleagues from the National Union of Journalists of the Philippines said in today’s statement,” said Salem. 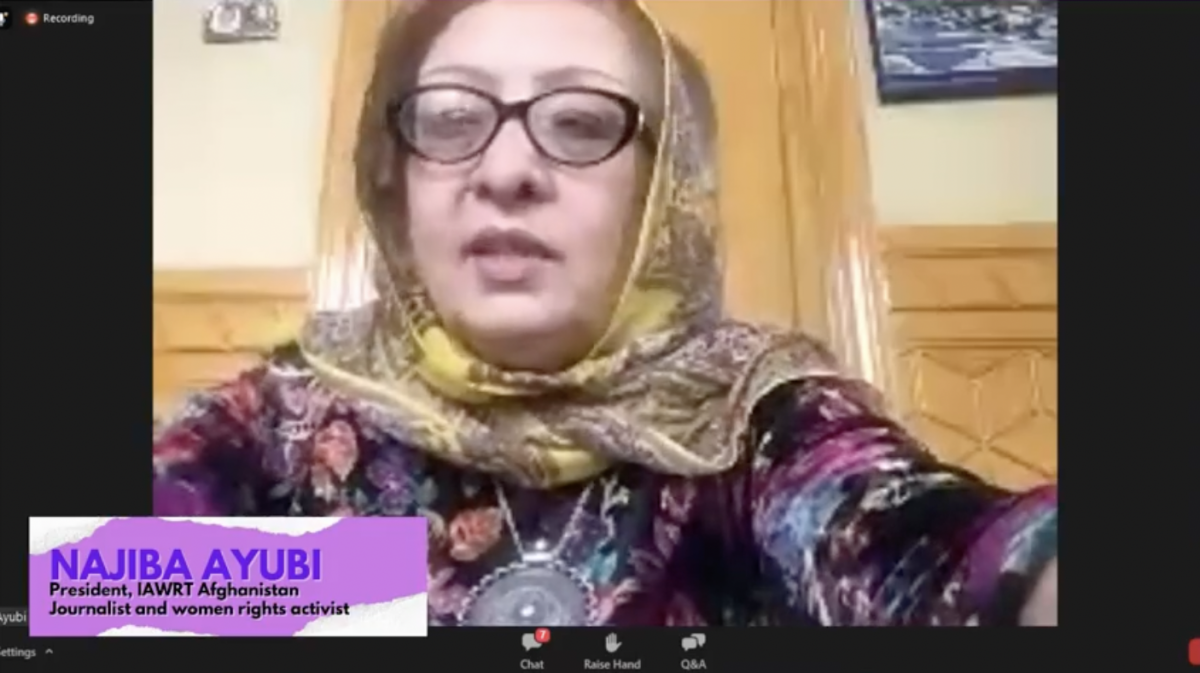 “We had 20 years of experience of free media. We established more than 500 media outlets in radio, television and print. We achieved that to make media an industry in this country, and 12,000 workers and journalists were working in this industry,” shared Ayubi.

But Ayubi said the situation was a lot different in the last year.

“When peace negotiations started, the situation changed. We had three big issues: COVID-19 which affected a lot, around 21 media outlets were closed, a number of journalists lost their jobs, a number left the country,” shared Ayubi

And then there were the journalist killings. No one took responsibility and no one was brought to justice for the killings of journalists in the last year, as she said, “we don’t know our killers.” 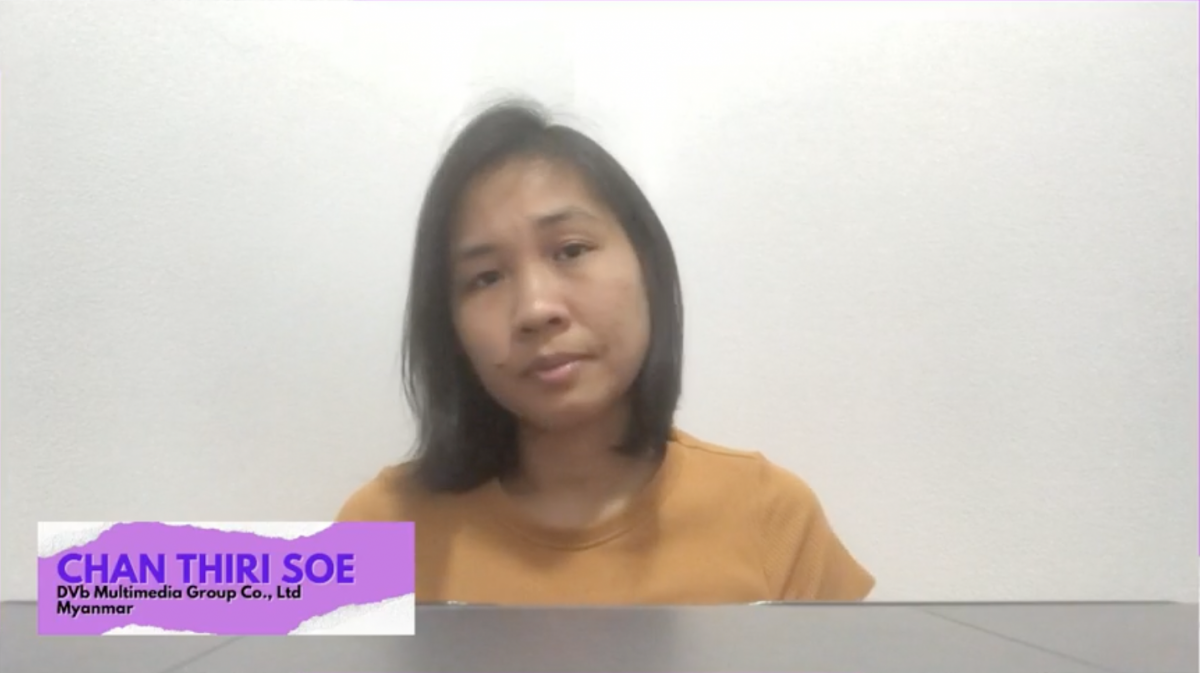 “They shut down our television channel, they shut down the internet, our media license was permanently revoked,” shared Soe.

Three DVB journalists have been arrested. One of them was arrested in his home at midnight—similar to what Salem and Cumpio in the Philippines. But what’s worse is that military troops surrounded his apartment and opened fire.

The program also invited contributions from IAWRT members and journalists from Asia. 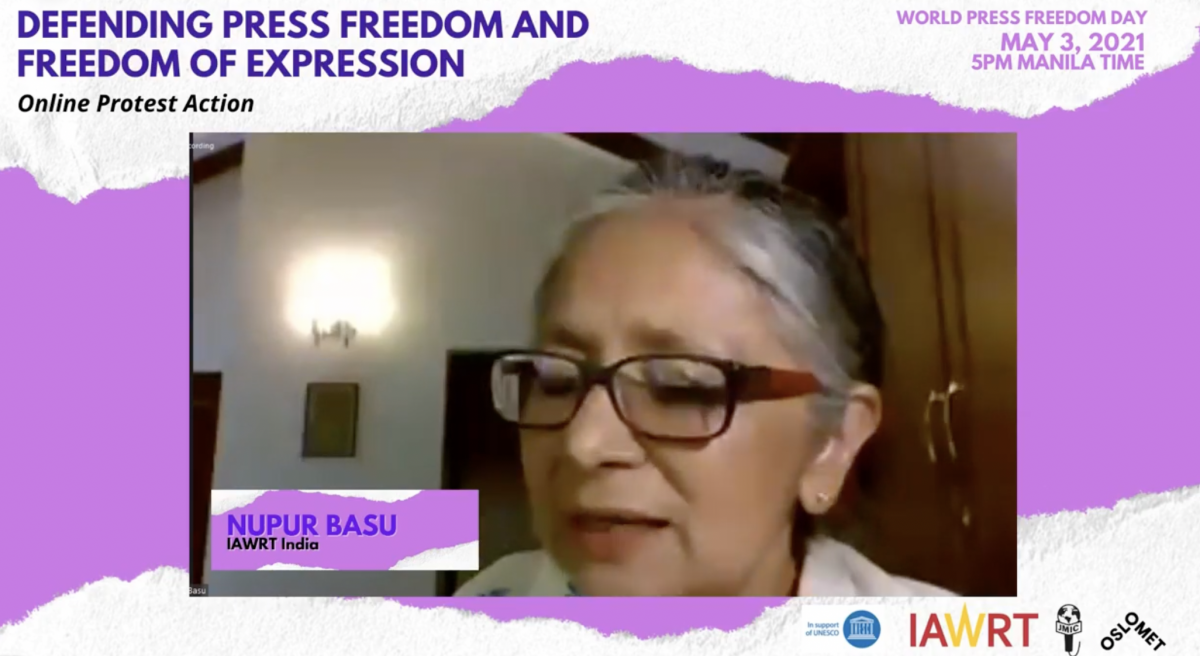 IAWRT India member and former chapter head Nupur Basu said the difficult times in her country in a deadly second wave of COVID-19 had given her a sinking feeling in her stomach like no other in her 40 years as a journalist and filmmaker.

“Journalists are all over trying to record what’s happening on the ground. There is no oxygen, there are no ICU beds and people are dying without oxygen in India, one that like to describe itself as a superpower… Journalist reporting on it are told calm down, don’t exaggerate, don’t spread panic. That’s the general sort of thing to warn them that we should not do the truth telling of the horrific things they are documenting on the ground,” Basu lamented.

She said COVID-19 has been an opportunity for rulers and non-state players who do not want a free press to crack down on the media worldwide.

Basu is the Executive Producer of IAWRT documentary ‘Velvet Revolution’ which chronicles lives of women journalists from the Philippines, Syria, India and Cameroon. 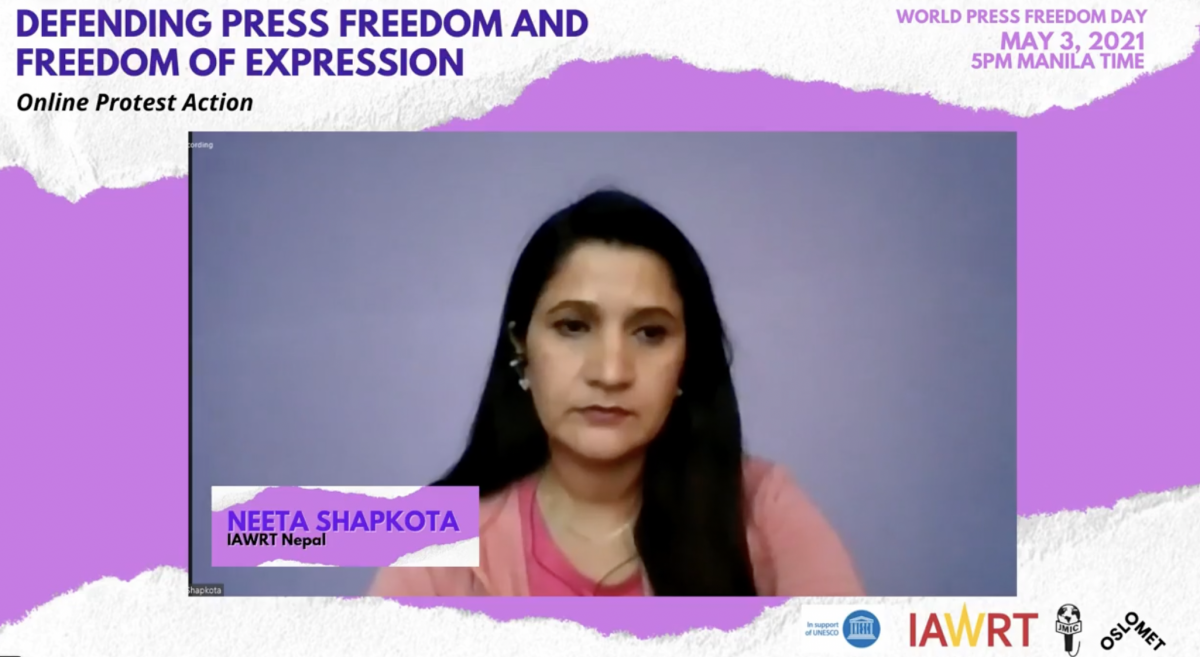 IAWRT Nepal board secretary Neeta Shapkota shared that though the constitution of Nepal guarantees press freedom, challenges to this include political changes, civil war, unstable government, ownership and censorship.

“I work with the state-owned media and I have been struggling with censorship issues in program, content, and reporting,” said Shapkota.

Journalists in Nepal struggle with wage insecurities and lack of job guarantees, especially during the COVID-19 period when a lot of journalists lost their jobs. Meanwhile, women journalists have been more vulnerable to exploitation and abuses. Journalists also faced attacks and arrests during coverage of protest rallies. 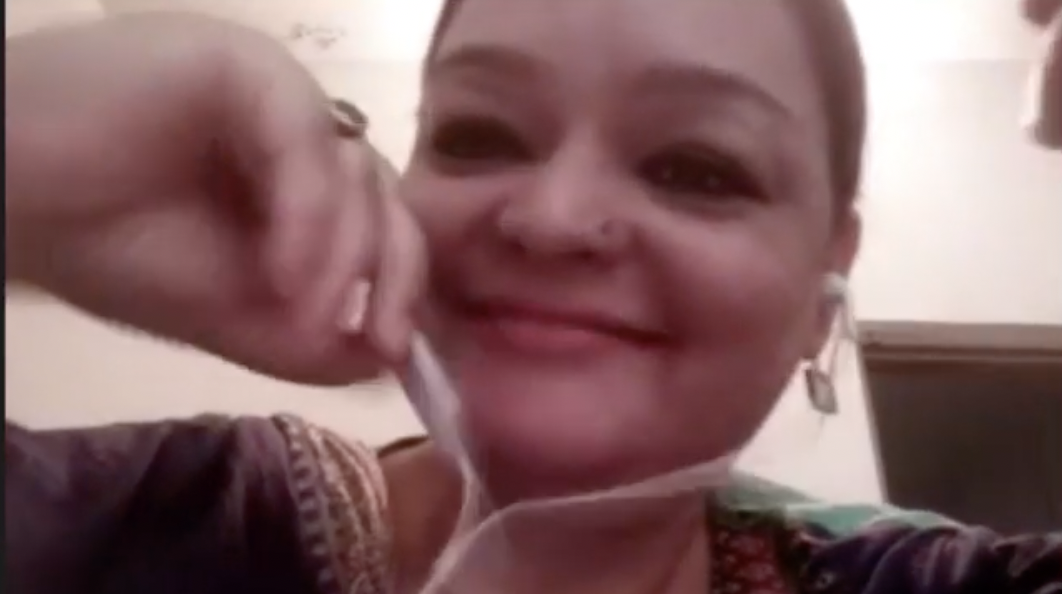 IAWRT Pakistan member Qudsia Mehmood elaborated on a current study in her country that says Pakistan has been facing restrictions on electronic, print and social media from state and non-state actors and journalists are facing all kinds of threats like physical, legal and digital threats.

“Censorship is not only to journalists, but also to their media houses because the situation or environment in Pakistan is so much intolerant…especially the 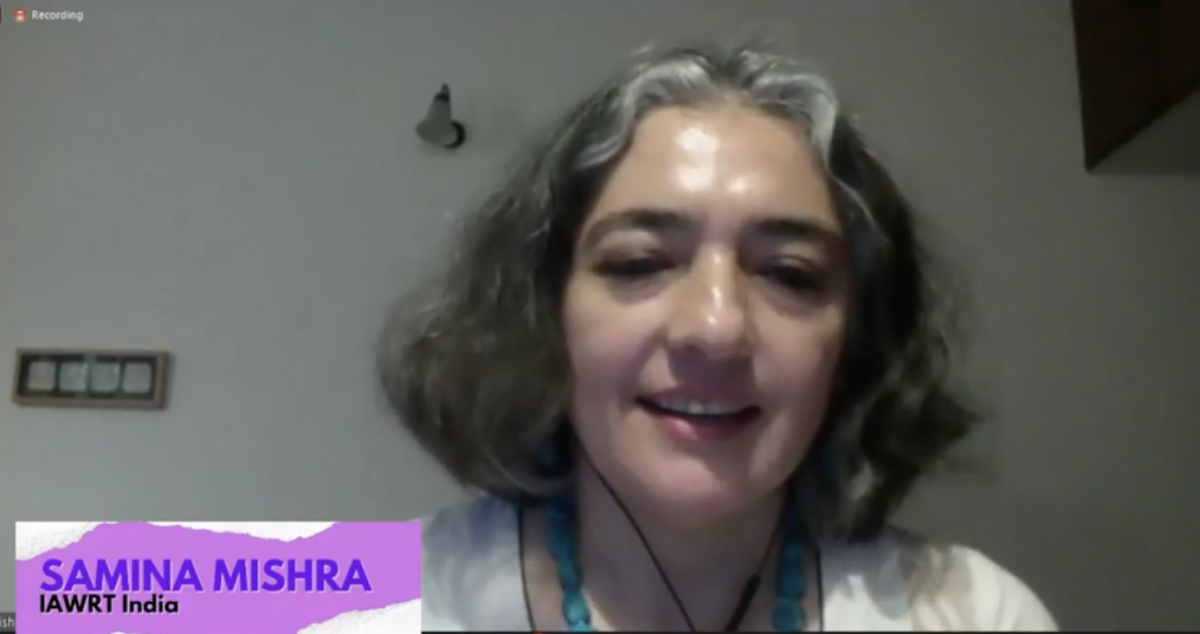 sitting government has a mindset that they do not tolerate criticism and censorship extends not only to a specific program but to the whole media outlet,” said Mehmood. 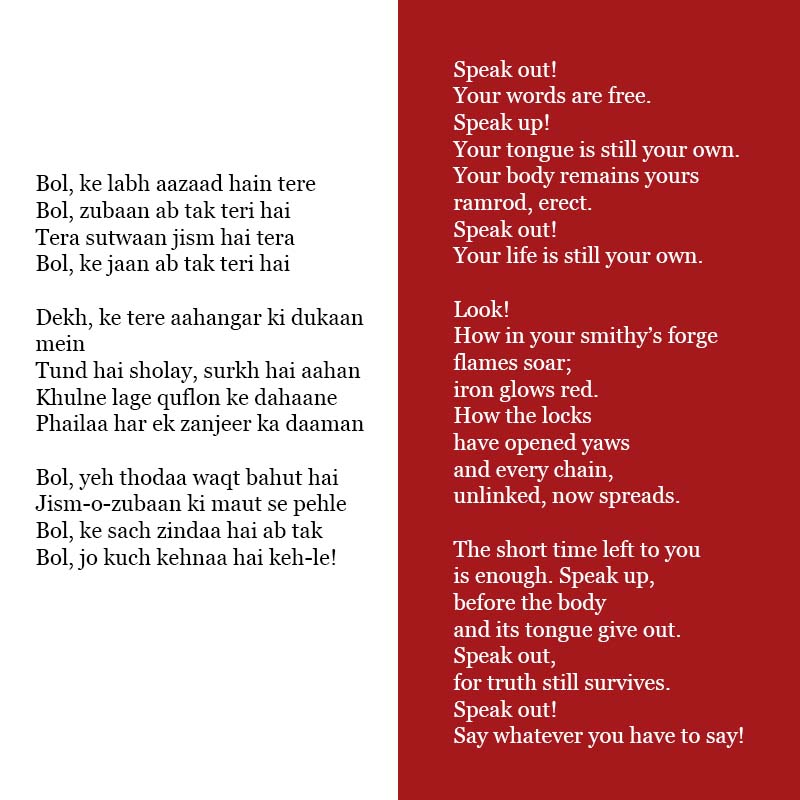 The theme of this year’s WPFD was ‘information as a public good.’ 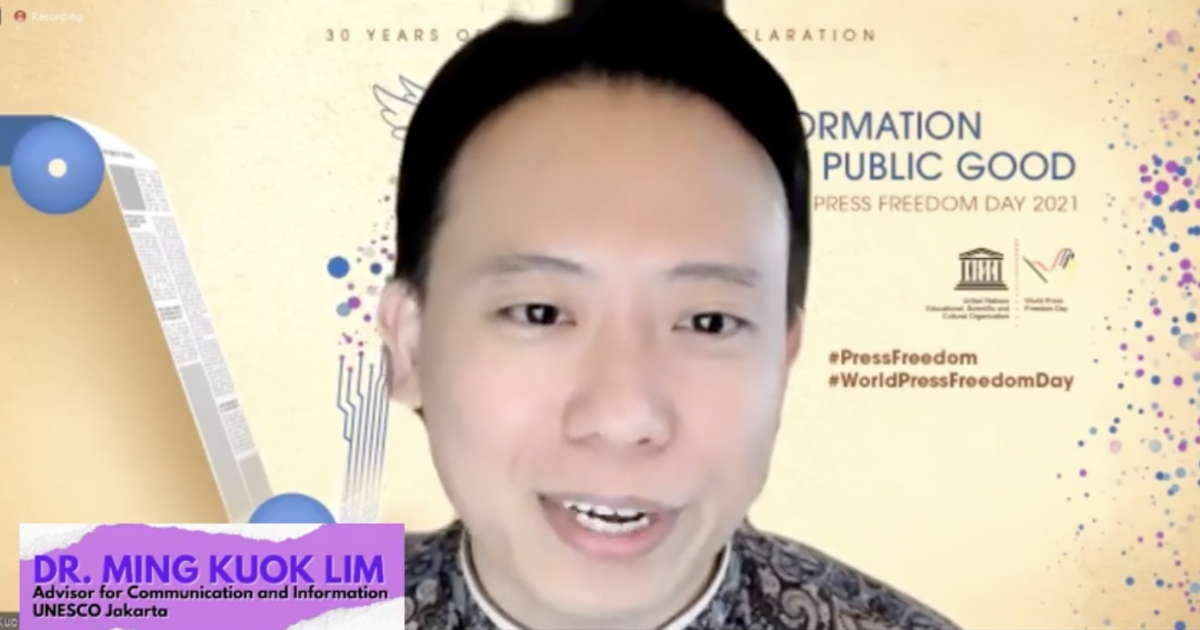 “It serves as a call to reaffirm the importance of cherishing information as a public good and exploring what can be done in the production, distribution of content,” explained Dr. Ming Kuok-Lim, UNESCO Jakarta Advisor for Communication and Information.

Three issues or perspectives on this year’s theme are viability of media and news organizations in this day and age, the transparency of online platforms and how it impacts journalism, the link between media and information literacy and how it can counter and disinformation and hate speech.

He said, “The current pandemic has really increased pressure on journalism and journalism

He agreed in some of the speaker’s call that journalists should have the frontliner status to be in the priority to receive the COVID-19 vaccine. 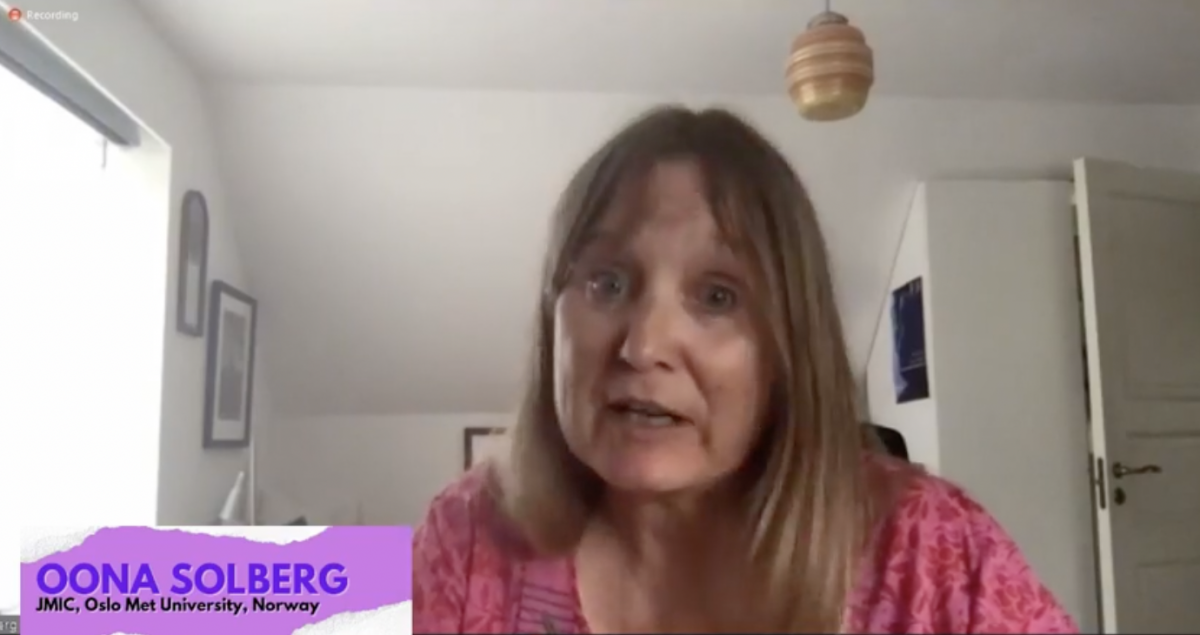 “Today, the World Press Freedom Day, 3rd May, is celebrated all over the world…30 years after the Windhoek Declaration…the declaration for a free, independent, pluralistic press is produced by African journalists in Namibia in 1991,” said Oona Solberg of the JMIC of Oslo Metropolitan University to close the program.

This year’s WPFD marked the 30th anniversary of the Windhoek Declaration, considered a benchmark for ensuring press freedom around the world.

“Here today we are so proud the winner of the UN Guillermo Cano World Press Freedom Prize Maria Ressa. This prize is in honor of an assassinated Colombian journalist and Maria is carrying this tradition with carrying the fight for press freedom in the Philippines and in the world for all of us,” said Solberg.

The United Nations General Assembly declared May 3 as World Press Freedom Day, observed to raise awareness of the importance of freedom of the press and remind governments of their duty to respect and uphold the right to freedom of expression enshrined under Article 19 of the 1948 Universal Declaration of Human Rights.