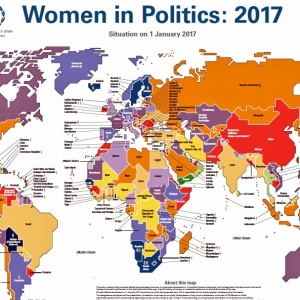 A unique visual tool to capture women’s participation in executive government and in parliaments around the globe.

The map of Women in Politics provides a snapshot, as of 1st January 2017. It includes a country ranking for both ministerial and parliamentary representation, as well as statistics on women in political leadership positions – heads of state or government, speakers of parliament, and ministerial portfolios held by women throughout the world.

The number of women heads of state or heads of government fell from 19 to 17 since 2015, and progress in the number of women in parliament continues to be slow, according to Women in Politics 2017, which can be accessed in English by clicking here. Download in Spanish. Download in French. The map is enlargable and you can zoom to areas of interest on your home screen.

IPU data shows that the global average of women in national parliaments increased just slightly from 22.6 per cent in 2015 to 23.3 per cent in 2016. The number of female speakers of the house, however, is up to the highest so far, with 53 out of 273 posts.

Martin Chungong, the Secretary-General of the IPU says “In 2016, we saw confirmation of a trend we had been seeing, when it comes to representation of women in parliament, there is progress but the progress is excruciatingly slow. At this rate, it will take 50 years to reach 50-50 parity,” Mr. Chungong told the press. “This is a warning signal; we have to do something about this.”

Regionally, women’s representation in the Americas made the most significant gains, according to a press release from UN Women. Women’s participation in parliaments rose to 25 per cent from 22.4 per cent in 2015, even as the region saw a drop in heads of state with the presidents of Brazil and Argentina leaving office.

In Asia, women hold 11 per cent of ministerial posts, led by Indonesia whose Government is comprised of 25.7 per cent women.

Among the Arab States, 9.7 per cent of senior executive posts are held by women, led by Tunisia and the United Arab Emirates, at 23.1 per cent and 26.7 per cent, respectively.

In Europe, the total percentage stood at 22.5 per cent. A surprise came from the Nordic countries which have traditionally led the global stage in politics, but whose number of female ministers fell by more than six per cent to 43.5 per cent.

Female ministers in Africa saw a decline in numbers, after years of steady growth. About 19.7 per cent of the region’s ministerial posts are held by women. In Johannesburg in 2016 an IAWRT impromptu theatre event scratched the surface of the uphill battle for women who aspire to political representative roles.

Breakthrough or backlash: Women, media and politics – Theater activity from IAWRT on Vimeo.