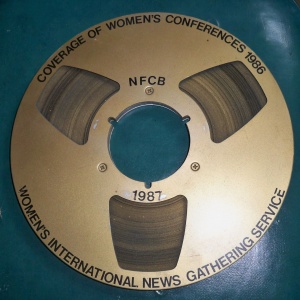 WINGS: Women’s International News Gathering Service, a weekly radio program by and about women around the world, has now been in distribution for 30 years.  The pilot, funded by the NPR [US National Public Radio] Satellite Program Development Fund, was released on satellite May 13, 1986.

Initially, the team of women producers and audio engineers worked out of Western Public Radio in San Francisco, where Frieda Werden (a former IAWRT president) was Operations Manager. The series was inspired by the three United Nations World Conferences on Women that took place from 1975-85, at which women from many countries met, compared notes, and forged a common agenda.  The project began with reaching out to producers who had attended a radio meeting at the 3rd World Conference on Women in Nairobi in 1985.(Pic above: WING’s first award, an NFCB Golden Reel, received in 1986).

“We wanted to do what we could to continue women’s awareness of each other and solidarity that had been forged at those world meetings. Especially in the ’80s, media coverage of the women’s movement was very sparse and grudging,” Frieda recalls. “They used to say that women hold up half the sky, but when you removed the celebrities and the victims from mainstream media coverage there was very little left”  [an observation which is hardly less true today, as evidenced by the IAWRT’s 2015 report Gender Equity and Social Justice in Public Media]. 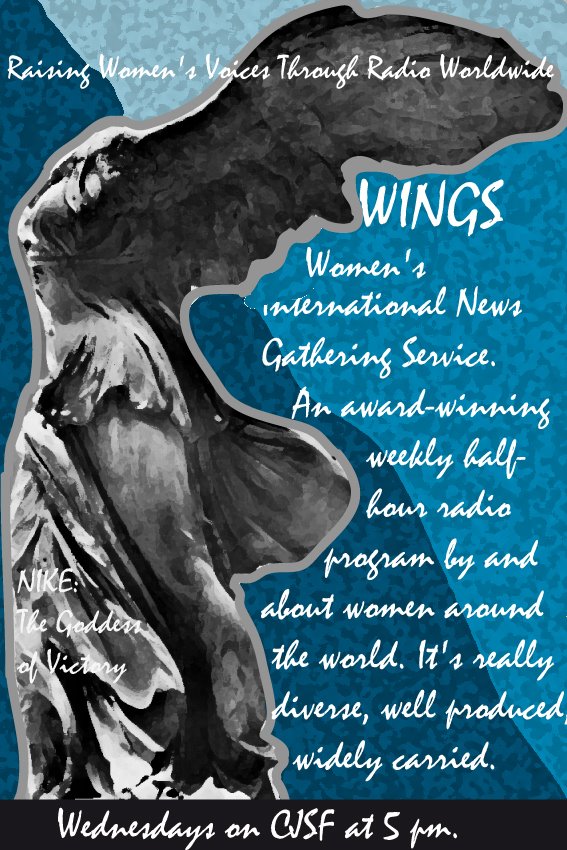 After the pilot was released, more stories which WINGS had solicited from international producers, kept arriving in the mail, so a second episode was produced by Frieda and Katherine Davenport.  Just then, they received a grant from the US National Federation of Community Radio Broadcasters (NFCB) to travel to Vancouver, Canada for a conference of AMARC (the Montreal-based World Association of Community Radio Broadcasters).  Through AMARC, WINGS made many contacts with producers and broadcasting stations around the world, and became active in promoting feminism inside the community radio movement.

In August 1986, WINGS became independent, distributing a monthly women’s international newscast.  In addition to satellite, they began distributing on cassettes that the producers duplicated in their living room.  In 1987, WINGS received an award and some funding, began weekly production, and added distribution via the Texas-based Longhorn Radio Network.  After the San Francisco earthquake of 1989, they re-located to Kansas City, with help from community radio KKFI.

In 1992, Katherine Davenport died, and Frieda moved WINGS headquarters to her former home town, Austin, Texas, where Genevieve Vaughan, a supporter of women’s media, had established her Foundation for a Compassionate Society. Frieda worked for the Foundation and taught radio at its WATER house (Women’s Access to Electronic Resources) while still producing WINGS.  In 1999, Frieda’s friend Mal Johnson (former IAWRT UN representative, now deceased) enticed her to attend an IAWRT conference in India, where she met women who would become friends, mentors, and WINGS contributors, including Indu Ramesh and Violet Gonda.

In 2002, Frieda took WINGS with her when she re-located to Canada.  It is currently headquartered on Denman Island BC.

Around the turn of the millennium, WINGS counted more than 250 women producers who had been contributors and some 150 non-commercial radio stations carrying the programs.  Then as now, most of the stations received the programs for free. Today, the shows are distributed electronically, making usage harder to count.  WINGS is available on the community radio satellites of Australia and the US, and from community radio distribution sites in Australia, the US, and Canada. It is also distributed via email to hundreds of stations and individual recipients, and is podcast on the Rabble Podcast Network (founded by Canadian feminist Judy Rebick and managed by IAWRT member Victoria Fenner). 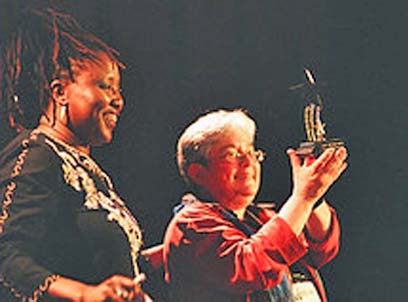 At age 69, Frieda is looking at the possibility of retiring from WINGS in the future, and wondering if other producers might like to take it over.  She notes that women’s participation in the media has increased and she is proud that WINGS has played a role in that. “Working with women producers around the world and paying them is one of the best things we do; a lot of producers have gotten their first pay in radio from WINGS”.

She says the program’s international viewpoint on women is still nearly unique in radio, and she hopes that anyone who follows her will retain the program’s character. “We have developed a style that gets across a lot of information in the most accessible and passionate way. We are always looking for new analyses and new ways women are trying to make things better.”