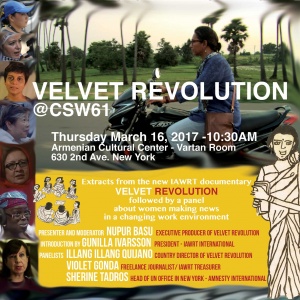 IAWRT will be  screening parts of the 2017 documentary Velvet Revolution about women making news in the face of adversity, at a parallel event to the UN Commission on the Status of Women (CSW61) being held in New York.

The documentary focuses on dangerous zones such as the Philippines, Cameroon, Afghanistan, Pakistan and Bangladesh along with challenges for Dalit women in India.

IAWRT President Gunilla Ivarsson will introduce IAWRT’s continuing work with gender equality in the media and how we use the results of the Gender Mainstreaming Project report.

The event, alongside the 61st Session of the UN Comission on the Status of Women will be held 10.30 am March 16, 2017 at the Armenian Convention Center (Cultural Center) 630 2nd Ave, New York.