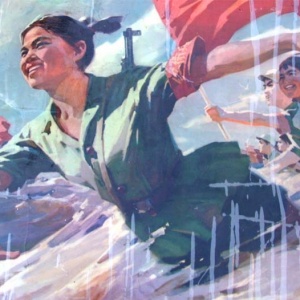 Many years ago in my university days, I was taken by this famous Chinese propaganda picture, based apparently on the late Chairman Mao’s quote, “women can hold up half the sky” depicting women leading a fairly equal gender divide of troops.

For me it was an amusing culturally mixed metaphor as it looked suspiciously like the parting of the Red Sea, but I liked the idea of a woman leading the way forward. I cut off the slogan because, for me, it was a work of art I liked which was, none-the-less, a fairy-tale version of the reality of women’s rights and opportunities. Battered and worn, I still have it, and despite 20 years of international debate since the Beijing Women’s conference, it may still be more aspirational than factual.

To an outsider observing any United Nations discussions, no matter how important the issue, it can appear to be what English speakers describe as “dotting the ‘i’s and crossing the ‘t’s”, so approaching a book which purports to examine decades of UN discussion and advocacy about women is a little daunting. Indeed in Women and Girls rising: Progress and Resistance Around the World, the first agreement on sexual rights in the Beijing platform is described as having being “negotiated painfully”, with the ongoing work to protect those agreements, “a continuing strain on activists.”

However, the notion of being extremely, perhaps unnecessarily, precise by putting a dot in the letter i and crossing the letter t, seems quite apt, when Chinese IAWRT member Cai Yiping (photo below) and her colleague, Liu Bhonog. in a section entitled Negotiating Gender mainstreaming in China, declare it a problem that the Chinese Government defined ‘gender mainstreaming’ as being interchangeable with ‘equality between men and women’.

After China hosted the 4th World Women’s Conference in Beijing, they say the prevailing discourse of equality, enshrined in China’s constitution since 1954, should have made the adoption of ‘gender mainstreaming’ – ensuring policies benefit men and women equally  –  pretty straight forward. Yet the concept was co-oped and translated to mean “mainstreaming gender into policy-making”.  China has been very successful at this, incorporating the important concept of human rights into policy about women and allocating administrative responsibilities to the prevention of violence against women. Women’s development and gender equity and the commitment to the Convention to end all forms of Discrimination against women (CEDAW) have also been incorporated into China’s Economic and Social Development Plan. As noted elsewhere in the book, there are more UN member states in CEDAW than any other treaty; that should put China at least one step ahead of the United States, which has not ratified the convention.

It all sounds pretty good, but Cai Yiping and Liu Bohong report that while many important policies have been implemented, gender inequality continues to grow in China, indeed inequality may have increased in the last three decades of economic liberalisation. In a country where women’s participation in the paid work force is 40 percent higher than the world’s average, the gender wage gap is increasing, along with rural urban disparities, as China has grown into the world’s second largest economy. In political participation, less than a quarter of the country’s decision-makers are women.  Yet, based on national averages, China is meeting its UN millennium development goals in education. However, the authors say this disguises a number of barriers to women in education. Likewise goals on maternal mortality have been met, but there are many other measures of women’s health, and reproductive rights remain a contentious issue.

In essence, they conclude that “current efforts on gender mainstreaming focussing on policy making, law and legislation are weak in implementation and enforcement”. This is of course a simplification of a rich and complex analysis of the status of Chinese women on the 20th anniversary of the Beijing Women’s conference, but it raises one issue which concerns many contributors to Women and Girls rising: Progress and Resistance Around the World, and that is the priorities given to women in the global development agenda, and the meaningful participation of women’s rights activists in policy building.

As the editors Ellen Chesler and Terry Mcgovern point out in the introduction, “misguided economic policies are devastating poor women” in countries where governments are “acting at the behest of global financial institutions.”  Simply put, gender policies won’t work without larger policies to address the growing divide between rich and poor.

“Since 1995 The UN’s need to build consensus and reliance in public private partnerships has actually impeded the progress of feminists’ efforts and thinking” According to Indian activist and academic, Devaki Jain. While the UN enabled covenants to protect and advance women’s rights and nurtured feminist networks, Jain says globalisation is now pushing multilaterals like the UN aside ­—  “they lost their power to negotiate justice.” She is disheartened by the lack of change in the condition of women and girls, as the commitment to women’s rights and equality exists in high places, but “the ground remains largely still.”

In A feminists reflections on the partnership with the UN system, Devaki Jain questions the value of her time “walking alongside the UN system for 40 years”, when the condition of the world’s women in terms of work and violence, in particular, shows little improvement. She cites the sobering statistic that two thirds of the world’s 774 million illiterate adults are women and says the United Nations has become an unwieldy bureaucracy trying to fulfil: “multiple roles as development activist, human rights champion and negotiator of peace and security [which has] had a negative impact on the larger goals of peace and justice.”

However, the struggle to have nations recognise in law that women’s rights are human rights, only developed through activism and the many UN women’s forums held since the first women’s conference in Mexico. Charlotte Bunch and Roxanna Carrillo say that concept has grown exponentially in the past two decades. Now most countries have such rights in law, but certainly not in fact. These pre-social media world conferences of the 1990s were fundamentally important in shaping a generation of civil society activists, they say: “[and] still stand as a beacon of hope that concerted collective action can advance respect and the realisation of women’s rights.” However, the challenge now is for there to be new ways forward, to address the economic divide, and another particular issue of concern, the paucity of women’s involvement in peace-making, and post-conflict reconstruction policy.

Devaki Jain acknowledges that UN human rights frameworks are strong enabling tools for subordinated groups, and provide important access to legal systems. However, the lack of financial investment by states reduces such rights (to education or food, for example) to rhetoric. The women’s rights agenda “has floundered for lack of resources to back it up.” Her thoughtful contribution argues for a renewed feminist contribution to mainstream economic thought, where combating poverty can “bubble up [rather than] trickling down.” She suggests borrowing from the Indian economist and philosopher Amartya Sen, taking on board his powerful concept that eliminating injustice should take precedence over striving for the perfect goal of justice.

“The feminist movement should convince the UN to take up the challenge of the overall increase in inequalities – not limit ourselves to gender equality.” It is just one of the challenging and informative views in this rich collection which is well worth close attention According to Devaki Jain new macro-economic theories built and transacted by women “could be a great leap forward”, and then, perhaps, I could return my old Chinese poster to the wall.

The Roosevelt Institute will officially launch the book in New York, on September 17th 2015 at the Ford Foundation.