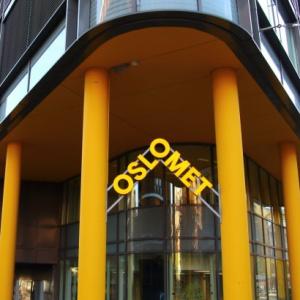 The photo exhibition was planned under different circumstances, said Professor Emerita Elisabeth Eide, also Co-founder of Journalism and Media International Center (JMIC) at Oslo Metropolitan University (OsloMet) at the opening of “Where there is a War, there is still life” photo exhibit.

The exhibition was opened on August 25 by the Norwegian State Secretary from the Ministry of Foreign Affairs, Mr. Jens Frølich Holte, followed by the Afghan Ambassador, his Excellency Mr. Youssof Ghafoorzai. Other speakers in the opening ceremony included Rector Nina Waaler at OsloMet, and Free Expression Foundation Director Knut Olav Åmås.

Prof. Eide expressed gratitude to the Afghanistan Photographers Association, without whom the exhibition cannot be possible, she said.

“Farzana Wahidy, Director of AP, would like to be here if circumstances would have been different,” said Prof. Eide.

The Taliban took over Kabul on August 16. Thousands of Afghans left the country since then, while many are still trying to leave the country to various destinations such as Qatar, Albania, Tajikistan, US, Canada and several European countries. Women journalists are thought to be among the most vulnerable should the strict Taliban rule return. Their five-year rule before the 20-year war saw restrictions on women’s rights to study, work or move freely.

“The exhibition is a powerful message of a world which cannot survive in the same way, perhaps showing what is at stake if a peaceful, and just, and rights-based solution is not found,” said Prof. Eide.

The APA made a call and 600 photos were submitted, and 46 were selected by a very professional, international jury. Six of the 27 photographers whose photos became part of the exhibit were from women.

“Far too often, the images from Afghanistan have been on war and violence, women’s suffering, and foreign troops. Afghanistan is a proud nation with a strong history of independence. In later years, civil society activists have worked to safeguard the constitution and the rights of different vulnerable groups. Many women have been in the forefront of these activities,” said Prof. Eide.

Watch the rest of the opening program: