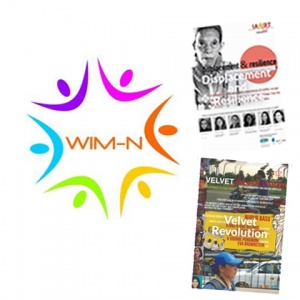 Virtual edition of the film fest from October 17-21

Woman In Media – Newark pushes on with the 11th year of its film festival virtually this October. The film festival was initially scheduled in March this year, but was postponed due to the COVID-19 pandemic.

The documentary tells the stories of women refugees from five locations around the world. We meet Syrian women refugees in Tunisia and Canada, a Tibetan refugee in India, displaced indigenous women in the Philippines, and Rohingya women, forced to flee their homeland. “Displacement & Resilience” is produced by IAWRT in 2018 with support from Fritt Ord. Chandita Mukherjee proposed the concept and coordinated the production of this collaborative project. The film brought together six film makers from around the world: Erika Cruz of The Philippines, Khedija Lemkecher of Tunisia, Eva Brownstein of Canada and Afrah Shafiq and Archana Kapoor of India.

In this film, six women directors take their lens up-close to Women Making News. In a world riven with conflict and dictatorial regimes where journalists are constantly under threat of both, state and non – state actors, what drives these women journalists to do their jobs?

The film is directed and produced by Nupur Basu, with segments directed by Ilang Ilang Quijano from the Philippines, Deepika Sharma from India; Pochi Tamba Nsoh and Sidonie Pongmoni from Cameroon; and Eva Brownstein from USA/ Bangladesh.

The film festival also features live events, such as the AfroContigbo African Dance Party, Buster Williams Bass to Infinity, Celebrating Toni Morrision Marathon Read-a-thon and a Shorts program among others.

All events are free and open to the public.