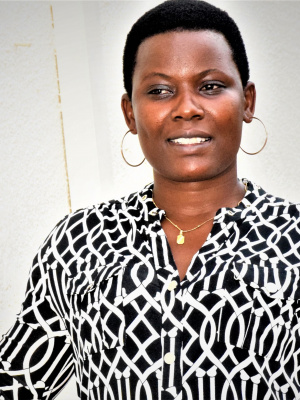 Nankwanga Eunice Kasirye or Eunice to colleagues said she started to practice journalism as soon as she finished her ordinary diploma level course. Going to journalism school was a passion for her.

She is currently a private content producer and media consultant. She also does media rights advocacy with a niche on female journalists’ rights.

Eunice believes that the media in her country, generally, has helped in guiding public perceptions and national formulation.

In that respect, she said, “I am proud of a pool of journalists that I have trained and mentored into responsible journalists despite the challenges that associate with the profession in the country. I have contributed to deliberate and intentional efforts to uplift the pride of a female journalist, finding space for women content in all spaces where I have had a chance to serve as a journalist.”

Current IAWRT International Board Secretary Eunice became part of IAWRT in 2009. The Board Secretary she succeeded, Sarah Nakibuuka, also from Uganda, introduced Eunice to IAWRT.

“IAWRT has given me global exposure and networking through international physical representation and the global membership presence which creates a connection with multiple cultural experiences and opportunities,” said Eunice.

She also became part of the Gender Mainstreaming Project, one of IAWRT’s enduring programs, advocating for stories by women for or on women, and women becoming part of decision-making bodies and leadership posts in the boardroom.

“The Association has offered a platform for career progress and self-esteem through global and local representation,” Eunice shared.

She took her commitment to IAWRT further by running for the post of Secretary in the 2020 Board Elections and won.

In her term as Secretary, Eunice hopes to contribute to the “revival of members and chapters and the interest and vibrancy in the association.”

She also wants to re-emphasize members’ networking and collaboration.

Eunice became part of the mentorship project of female journalists in her country, where she said a number have successfully benefitted from the project. It was one of IAWRT Uganda’s programs.

Why the need for mentoring? IAWRT Uganda, in the Gender Mainstreaming Project, has identified obstacles that keep more women from taking up journalism courses or eventually pursuing a career in journalism or excelling in their workplace. Some of these include the lack of opportunities and challenges, coupled with cases of abuse from co-workers or even news sources.

“In my country there is a lot of self-pity and sexual exploitation among female journalists by the male senior,” Eunice shared.

IAWRT Uganda actively took part in the annual observance of 16 days of activism against gender-based violence. In one forum, Eunice highlighted the vital role the media has in raising awareness of GBV by setting the agenda with the power to dictate public perception.

“The female journalists also face intrigue and sabotage among each other in the quest to survive at a job,” shared Eunice.

Eunice advocated that women journalists support one another, as this will be another approach to attaining positive portrayal of women in the media. She also challenged women journalists in her country to desist from trivial differences, backstabbing, intrigue and blackmail but concentrate on building a formidable professional, reliable and objective force to make, enforce and oversee critical decisions that affect the space of a woman in the media.

IAWRT Uganda’s findings on the Gender Mainstreaming Project also showed how even when women become the leaders in their newsrooms, the culture is to defer to their male counterparts, despite them being younger or more inexperienced.

The chapter decided to develop a Uganda Gender Media Guide.

When the pandemic hit and lockdowns were enforced in 2020, Eunice wrote about the situation of female journalists. She reported that freelance or women journalists are let go over their male counterparts when media companies had to operate at half budget or downsize.

Capping all these efforts, Eunice said she would love to be able to establish a more stable and self-reliant one-stop  capacity building centre for female journalists in her country.

Not an easy task to be a woman journalist

What Eunice considers her biggest challenge is one of what she and IAWRT Uganda has identified to be barriers to women journalists’ success in her country.

“Societal negative stereo typing of career women, I have been so criticized for continuous improvement of my career, society labels me as ‘big-headed and insubordinate’ to masculinity,” Eunice shared.

Women teaming up with other instigators of negative portrayal of women efforts and labelling the women achievers as perverts has been her own personal challenge in this line of work.

“Achievers are not basic, they never settle for anything just because it is available, they create own legacy and stand in the space regardless of who supports or doesn’t support her cause,” insisted Eunice.

And Eunice will persist.

“Female journalists can receive the career respect they deserve and also sit on the decision table with confidence and pride. They ought to be respected by their actions and word, boldness and confidence comes with reliability,” she affirmed.