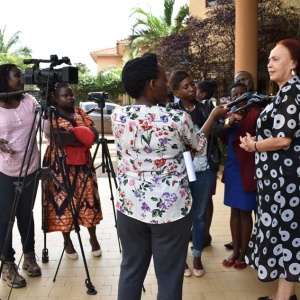 Ugandan journalists are supported to re-evaluate their potentials and weakness, identify opportunities and become gender ambassadors

The media statistics about women in terms of representation and relevance in Ugandan media are pathetic.

So a robust collaborative approach is required to achieve fair and better representation.

The 2014 Uganda National Census report says women account for 51% of the total national population. Despite that advantage in numbers the media does not reflect this balance in terms of news sources and positive portrayal.   According to the research by African Centre for Media Excellence (ACME) on media coverage for the 2016 Uganda general elections, only 20% of women were quoted as news sources in election stories between September 2015 and May 2016. The Global Media monitoring report 2015 indicates that only 28% of Ugandan women were news subjects with the majority linked to subjects rated as ‘unserious’.

The undesirable trends in media research statistics prompted IAWRT Uganda to engage with news editors and senior journalists on the agenda of gender mainstreaming in the newsroom; that gave birth to the IAWRT-Uganda Re discover to Re impose mentorship initiative.

The initiative is geared towards building a sustainable national pool of gender mainstreaming ambassadors through mentorship. The Re discover to Re impose Mentorship Project championed by IAWRT Uganda is a progressive initiative that  brings together journalists, students, institutions of learning, representatives of like-minded organizations or personalities and policymakers, to build a  sustainable pool of gender  media ambassadors.

Run under the theme; Re discover to Re  impose,  media practitioners,  especially women, ought to get back to the  drawing board and re-evaluate their potentials and weakness, identify their opportunities to promote gender-fairness and the threats that lie ahead in their struggles to be better positioned.(A SWOT analysis)  This would ensure gender sensitivity in internal media houses, human resources development, gender sensitive media content and elimination of negative portrayals of women in the media.

The initiative started with a pioneer selected group of thirty ambassadors that included ten mentors and twenty mentees to champion the gender cause in the media. The pioneer ambassadors were systematically selected by IAWRT-Uganda’s executive.

Building a sustainable pool of Gender Mainstreaming ambassadors through mentorship requires re discovering one’s potential to re impose for opportunities, thus it was imperative for the team to understand what gender and equity means in relation to the media alongside the legal frameworks that complement the strides towards equality.

Therefore, the Re discover Re impose gender mainstreaming workshop was held in Kampala in Dec 2018 to introduce the pioneer ambassadors to gender as a concept in relation to the media as well as the legal perceptive. Separate pre-orientation engagements with the mentees and mentors were held for feedback and development of a needs assessment tool to steer the mentorship process. Through career profiles which individuals made in their SWOT analysis, mentors were partnered up with mentees according to career needs and strength. This process of engagement is ongoing

During the orientation workshop, the IAWRT Uganda chairperson Nankwanga Eunice Kasirye, explained that Gender Mainstreaming project activities are focused on mentorship under the theme: Re discover to Re impose. She demystified the theme; saying that the re discovers are calls for re-evaluation of personal potentials, through undertaking a personal SWOT analysis to help better position themselves; then Re impose into the space of positive impact or opportunities.

Eunice challenged fellow female journalists to stop self-pity and to stand firm, to face their challenges with the determination to try again and again until the credible and impactful presence of women, at all levels, becomes real

Eunice says that if women re discover their potential and reposition to re impose into positions of power and authority then the negative portrayal of women in the media will automatically be censored.

Prof. Maggie Kigozi is the patron of the IAWRT Uganda chapter, she challenged the female journalists to work together and support each other, to build credible networks and determine to look out for female achievers to put their stories in the limelight. Professor Maggie says through mentorship, each one of us is able to build up into becoming a better person without losing out on anything 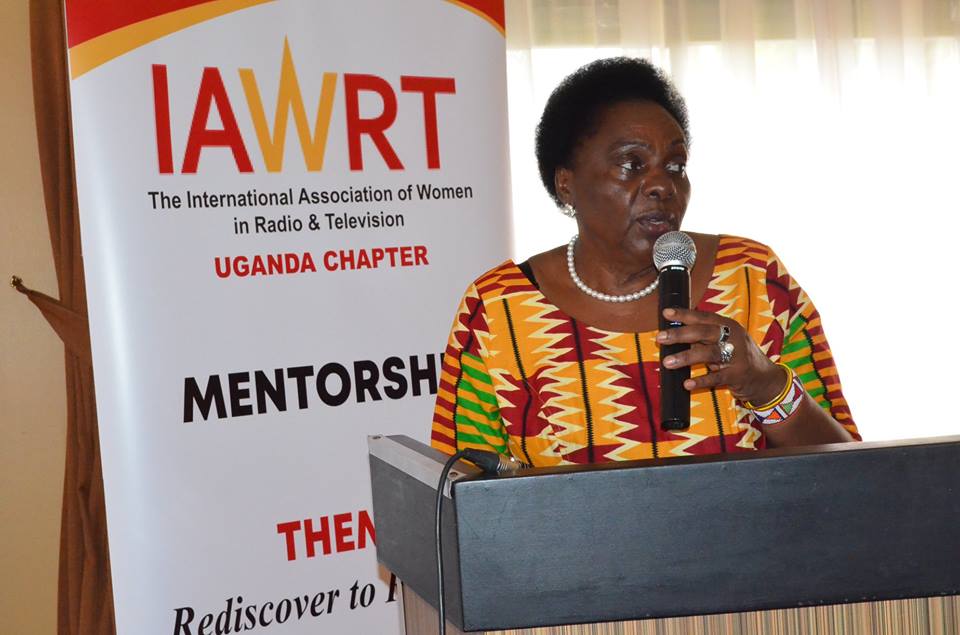 The Minister in charge of General Duties at the office of the Prime Minister, Mary Karooro Okurut, challenged the female journalists and pioneer gender mainstreaming ambassadors to set a fair precedent, by balancing up stories without bias before publishing them. She says it is more profitable to create working partnerships with sources than making them enemies through bad unrealistic reporting.

Karooro says the theme Re discovers to Re impose is self-challenging, for it demands open mindedness and a truthful and fair self-assessment to help one understand their current career position before leaping to the next level.

She says it is a theme that will help build a sustainable strong force that enables improvements to gender equity in both media organizational structure and content. The minister challenged IAWRT to look out for funding to carry out a survey on the exact position of the Uganda media in terms of gender equity and portrayal. 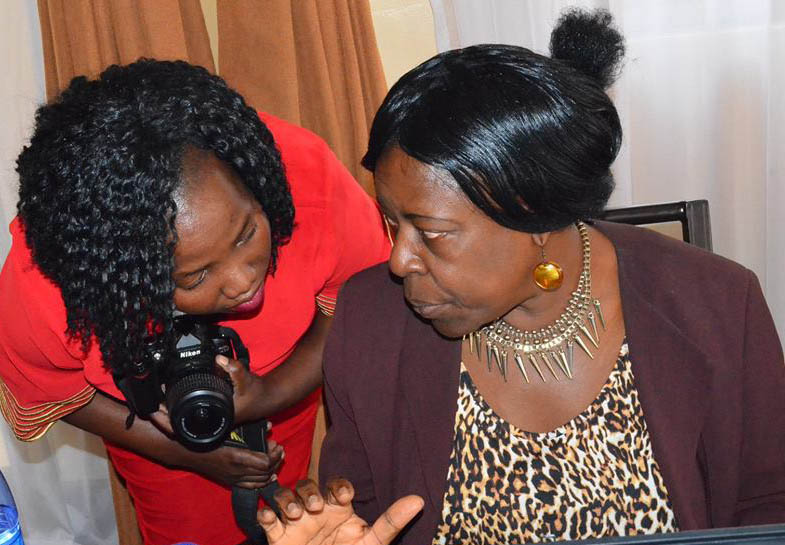 Professor Nassnga Gorreti, of Makerere University, who is the first full professor of journalism and communication in Uganda. says IAWRT mentorship should be able to improve positive portrayal of women in the media, the number of women in decision making positions within media houses and open up opportunities for career excellence. “The IAWRT mentorship should also be able to create a working relationship with institutions to integrate journalism schools into the agenda of gender mainstreaming through a sustainable approach”. she said.

Caroline Idembe is a human rights lawyer in Uganda, she facilitated a workshop on the need to understand the legal redresses and limitations to be able to re impose as female journalists in the positions that matter. Carol says the UN agenda 2030 which calls for the use of government funds for gender equity and women’s rights cannot be fully monitored without the media being well skilled and equipped with the legal and policy frameworks that obligates the government to meet its part of the bargain. 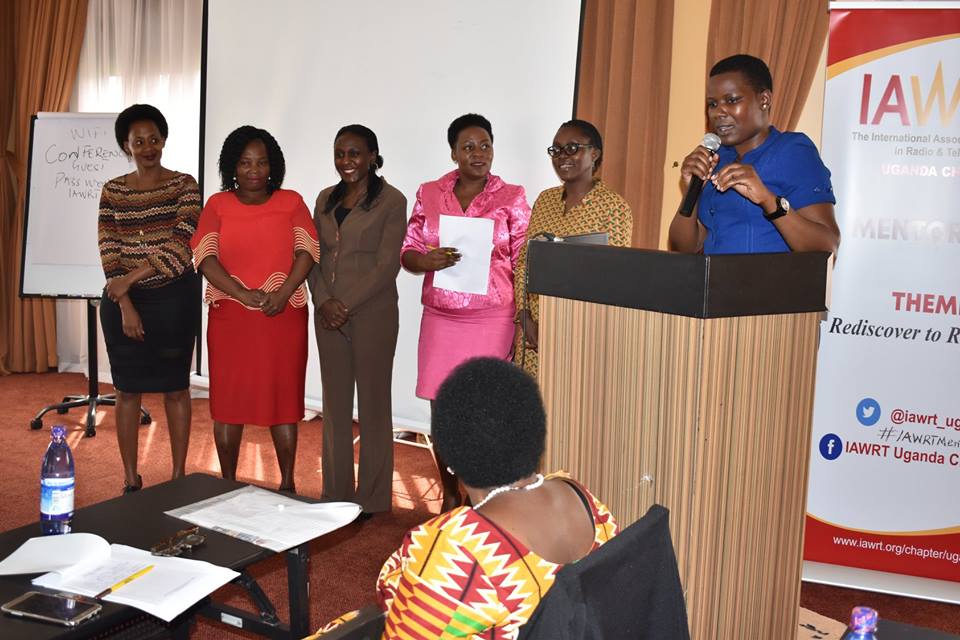 Therefore, we require continuous in-depth training for the IAWRT mentees.  We want the pioneer team to form a well informed force in the media which can be used as a reference point.

The intention is ensure that the pioneer ambassadors become trainers of trainers as they become well versed with gender and the law.

So the first orientation workshop was introductory to the gender concept and the legal frameworks for our ambassadors to light the candles where ever they work or operate from.

The Re discover to Re impose Mentorship Project under the championed by IAWRT Uganda is a progressive initiative that  brings together journalists, students, institutions of learning, representatives of like-minded personalities or organizations and policymakers to build a  sustainable pool of gender  media ambassadors.

‘Portrayal of women, girls in media should change’