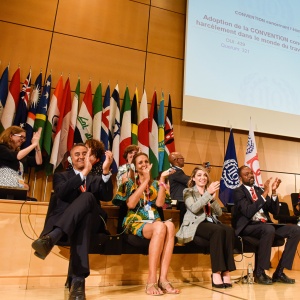 The first legally binding global convention to addresses gender-based violence and harassment in the world of work has been adopted by the International Labour Organisation.

“The new standards recognize the right of everyone to a world of work free from violence and harassment.”

“Governments, workers, and employers have made history by adopting a treaty that sets standards for ending the scourge of violence and harassment in the world of work,” said Rothna Begum, in a statement from Human Rights Watch.

The ILO is the only tripartite United Nations agency which brings together governments, employers and workers of 187 member states  to set labour standards, develop policies and devise programmes promoting decent work. The organisation spent two years negotiating the text of the violence and harassment convention.

“The women who bravely spoke up about their #MeToo abuses at work have made themselves heard at this negotiation, and their voices are reflected in these important new protections.”

The Convention recognizes that violence and harassment in the world of work ‘can constitute a human rights violation or abuse…is a threat to equal opportunities, is unacceptable and incompatible with decent work.’

It defines “violence and harassment” as behaviours, practices or threats “that aim at, result in, or are likely to result in physical, psychological, sexual or economic harm.”

It is the first time in the ILO’s hundred year history that a convention on the workplace has focused on gender based violence and its direct link to gender discrimination, according to the Center for Women’s Global Leadership (CWGL) at Rutgers University in the US.

As the global coordinator of 16 Days of Activism Against Gender-Based Violence (16 days) CWGL will release an updated toolkit to support organisations mobilising for the ratification and strong implementation of the convention.

The Internatonal Federaton of Journlaists also welcomed the adoption of the convention, which it says will strengthen the labour rights of media workers around the world.

“Urgent action is needed: our statistics demonstrate that at least one in every two journalists has suffered sexual harassment, psychological abuse, online trolling and other forms of human rights abuses.

The IFJ says it will keep on working towards the adoption of a UN Convention on the Safety of Journalists.

The new international labour standard aims to protect workers and employees, irrespective of their contractual status, and includes persons in training, interns and apprentices, workers whose employment has been terminated, volunteers, job seekers and job applicants.

At the ILO gathering, out of 476 votes, 439 delegates voted for the convention to end gender based violence and harassment. 7 delegates, from Costa Rica, the Dominican Republic, El Salvador, Guatemala, Malaysia and Singapore voted against. The United States reversed its decision from last year and voted in favour of the convention. 30 more delegates, many from South American countries, abstained.

The convention will enter into force 12 months after two member States have ratified it.