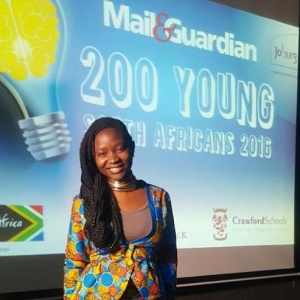 IAWRT South African Chapter head Sara Chitambo has been named one of 200 notable young South Africans in the Mail & Guardian’s annual edition of a project which highlights the young talent of the country.The newspaper and online outlet has run the list for just over a decade, to feature trailblazing South Africans under the age of 35.

Sara is the Project manager of ZAZI, a national women’s campaign that speaks out for women, under the motto “know your strength”. She works her messages across multiple media platforms, such as Facebook and Twitter, television, radio, and outdoor advertising.

She begain in health activism, promoting public health messages using popular culture, mass media and social media. Sara was one producer on the 2105 IAWRT documentary on reproductive Health ‘Reflecting Her’, presenting the story of Susan Vele Ravuku and Agnes Tomori from the province of Limpopo. The documentay showed the strength and good humour of the women in overcoming resistance to promote female condom usage and rural women’s rights to be safe from abuse.