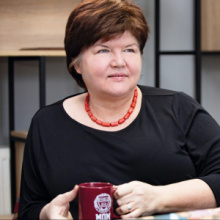 Report from a meeting in Oslo, Sunday, 3rd of April, with Alina Radu, editor and IAWRT Member from Moldova.

“When the media group Ziarul de Gardă started up 18 years ago, we were the smallest media group in the country. We wanted to give the people independent news.

Moldova is 30 years old, created in 1991. There have been 12 governments during these 18 years, and many members were dismissed because of our work.

So my advice is this: Never give up,” shared Alina Radu, a journalist from Moldova.

On her way home from a journalistic conference in Norway, Alina Radu managed to slip in a meeting before returning home. Twenty people listened to her conversation with journalist Olga Stokke, a newly recruited IAWRT member and elected board member of IAWRT Norway.

Alina Radu has 30 years of journalism career, being awarded by many national and international institutions for her investigative reports against corruption and promoting human rights (Moldova, Romania, Slovakia, Netherlands, Switzerland). Her newsroom is known for impactful investigative stories about corruption at the highest level. She shared:

“Through investigative methods, we have revealed corruption amongst politicians, judges, and religious leaders.

Because of ZdG’s investigative articles about his forged diploma and qualification papers, a prime minister had to step down, and authorities relied on our reporter’s work. Moreover, they often use our investigative stories as the basis for the Prosecutor’s office penal investigations on corrupt politicians in the country”.

Situated between Ukraine and Romania, Moldova has received over 400,000 refugees, the highest nr per capita of all the countries in the region. But unfortunately, it is also the poorest country in Europe.

“Nobody has been left to sleep outside. On the contrary, 90 % have been taken into private homes, which can be ok for a week, more demanding after a month. And more refugees will come, and the next wave probably is more traumatized than the first ones.

Our situation is not as bad as for the Ukrainians, of course. Ukrainian journalists cover the war without helmets and salaries. But we feel a pressure to inform. We have established good connections in the neighboring countries. The journalists at ZdG now work in 3 shifts, from 6 in the morning till midnight.

Since the start of the war, the web page has become the most read in Moldova, a source of information for Moldovan citizens, Romania, and many European countries who want information about Ukrainian refugees.

Professionally we are on top. We have many readers, but financially we are in a crisis. Our ordinary subscribers are poor, and we cannot charge the full price. We depend on donations, and several of them have stopped.

But we don’t give up. The people need independent news more than ever,” shared Radu.