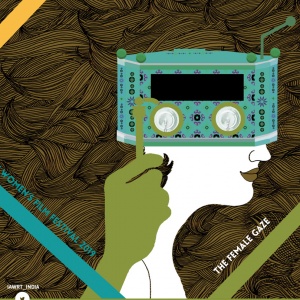 The 15th edition of the IAWRT Asian Women’s Festival was held in partnership with the India International Centre (IIC)-New Delhi from 4 to 7 March, 2019.

It began with a Round Table on #Me Too, an attempt to take stock of the #Me Too campaign in the Indian media and film industry, examine the challenges posed and plan the road ahead.

Around 50 women journalists, feminists, writers, activists, internet specialists, academics, filmmakers, and spokespersons of UN Women, FES and Oxfam India and Men Against Violence and Abuse (MAVA) attended the riveting four-hour long brainstorming and addressed the nuances posed by this campaign.

Clearly there was appetite for many such conversations in the coming weeks and months and follow up emails from participants highlighted the unique opportunity to experience solidarity across spaces and learn from each other; as well as how the conversation catalysed new thinking that they would like to build on together through more such opportunities. We hope to be able to strengthen this initiative. 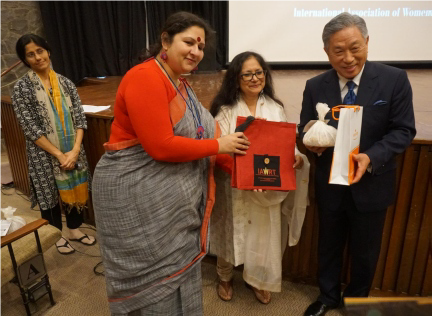 Our first guest at the screening was His Excellency Ambassador of Taiwan. ( Pic Left Mr Chung-Kwang Tien with Festival Director, Gauri Chakraborty & Managing Trustee IAWRT India, Nupur Basu) He viewed the film entry from his home country, Taiwan (‘Daisy’ Dir: Yu Yu) and other films in the morning segment.

Over the next three days the audiences would get to view 51 films from 20 countries – all directed by Asian women directors with the festival theme ‘Female Gaze’.

Apart from general programming, the curated themes for the 15 Edition were: a) Female Gaze by Bina Paul, b) Childhood by Samina Mishra, c) Seven Sisters (narratives from Northeast of India) by Supriya Suri, d) A Country focus on Georgia curated by Smriti Nevatia. e) A special segment on Soundphiles curated by Shikha Jhingan.

The festival invited both national and international filmmakers whose films had been selected for the three-day festival. The filmmakers from India who attended were: Asiya Zahoor, (The Stitch), Surbhi Dewan (Daughter of Nepal), Rishaya Palkiwala, (Roshan and Mani), Roopa Barua, (Daughters of the Polo God), Tribeny Rai (Chori), Asawari Jagusthe (The Housemaids). Divya Unny (Her First Time), Yapangnaro Longkumar (The River Story) and Chandita Mukherjee, Archana Kapoor & Afrah Shafiq (Displacement and Resilience).

The line up on day one was diverse and featured some award winning films like Peace Carpet (Iran), Mamushka (Israel) and Perhaps Today (Lebanon).

Surbhi Dewan, (Dir: Daughter of Nepal), a young filmmaker from India, engaged in a stimulating post film discussion on the content of disappearance and political identity. Asiya Zahoor (Dir:The Stitch) looked at conflict-ridden Kashmir through the eyes of a nine year old girl. Roshan and Mani, a charming student film about two Parsi sisters directed by Rishaya Palkiwala was followed by ‘Daughters of the Polo God’ from Manipur directed by Roopa Barua. 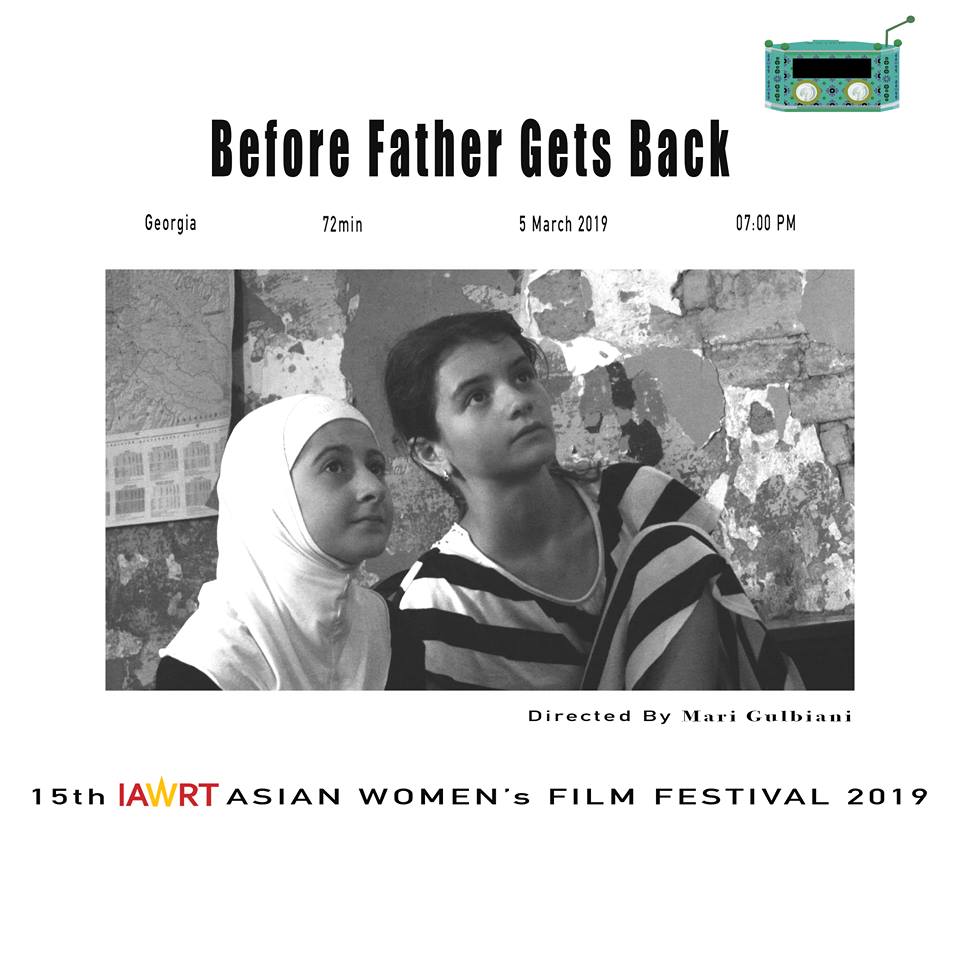 The highlight after the formal opening ceremony was the opening film – a documentary from Georgia, ‘Before Father Gets Back’, directed by filmmaker Mari Gulbiani. The evocative film explores the lives of two young Muslim girls Imam and Eva, growing up in the rising shadow of Islamic radicalism in the Pankisi valley of Georgia. The film was followed by an interaction between curator of the Georgia segment, Smriti Nevatia and Mari Gulbiani. The engaging discussion with the audience was about the fate of the film’s protagonists, the challenges of shooting the documentary, the gains made by Georgian women filmmakers in world cinema and the politics of representation.

Day two began with Autodriver, a film from the North East and was followed by other films in the segment ‘Encoded’. Filmmakers Tribeny Rai (Dir:Chori) from Sikkim and Fathima Shanaz (Dir:Hope) from Sri Lanka interacted with audiences on the specific content of both their films and their individual experiences in filming them. The much awaited IAWRT long documentary 2019 production ‘Displacement and Resilience’ produced by Chandita Mukherjee was premiered at the festival. the documentary has now won its first award.

The festival received an overwhelming response. The screenings were attended by cinephiles, media students, media professionals, academicians, feminists, researchers, IIC members and representatives from various organizations. The major highlights continued to be the active participation of the audience in post film discussions. 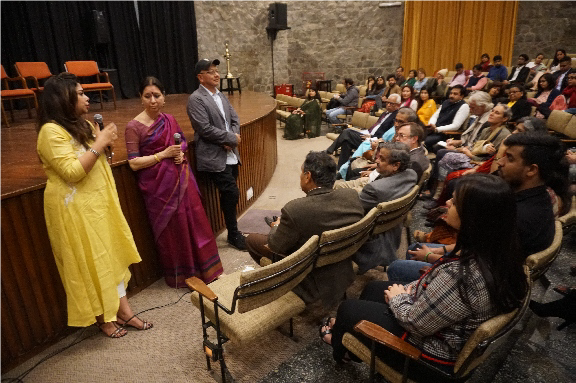 There were lively interactions from the floor about challenges women filmmakers face in their role as directors or producers. Bina Paul talked about the recent challenges and breakthroughs made by the Women in Cinema Collective (WCC) in Kerala. The WCC had become a rallying point for other women filmmakers in the country. Pic left: director, Roopa Barua (Daughters of the Polo God) in conversation with Jeroo Mulla.

Day three folms were dominated by the narratives on children and the world through their eyes. Ziazan from Turkey was one such film that explored borders as construed by a child in her own circumstances.

Director Divya Unny’s ‘Her First Time’, based on breaking the silence on menstruation was also part of this segment. Divya took part in an engaging post screening conversation with Sania Farooqui on how films can break social taboos.

Chuskit, an award winning film directed by Priya Ramasubban, about a paraplegic girl in Ladakh whose dream is to go to school one day, was another highlight of the Childhood curation. 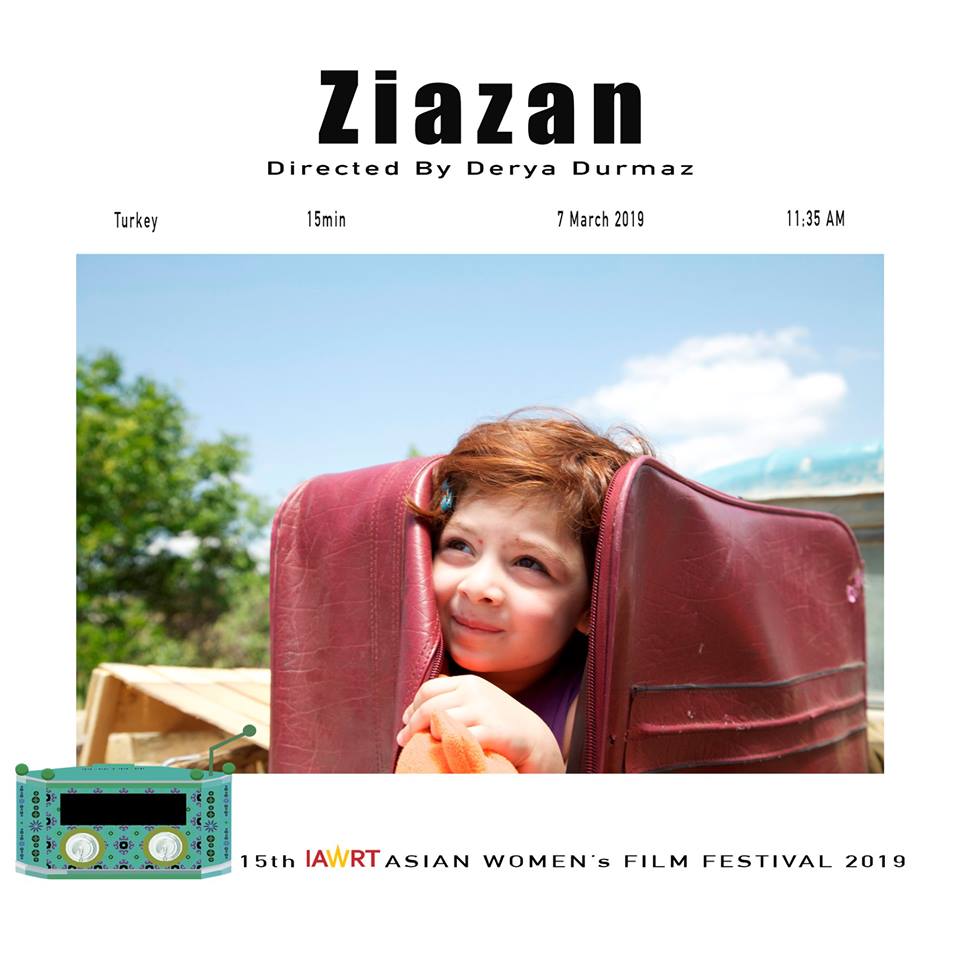 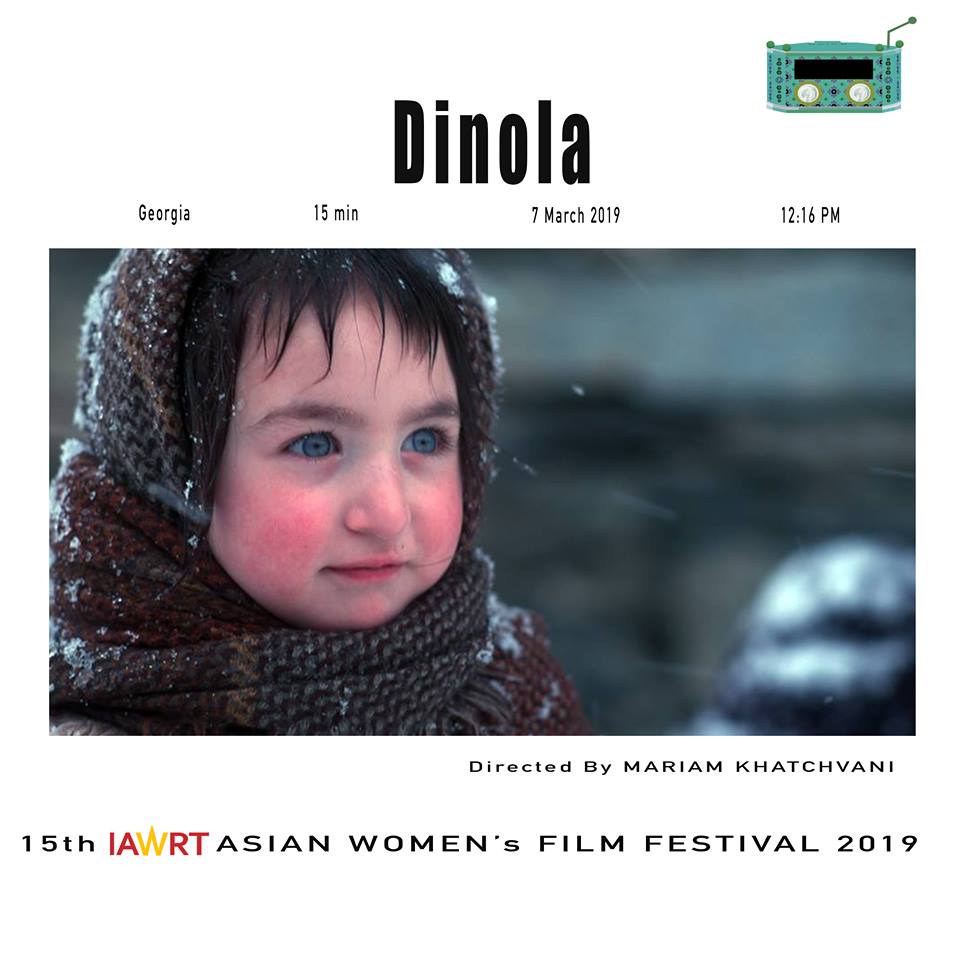 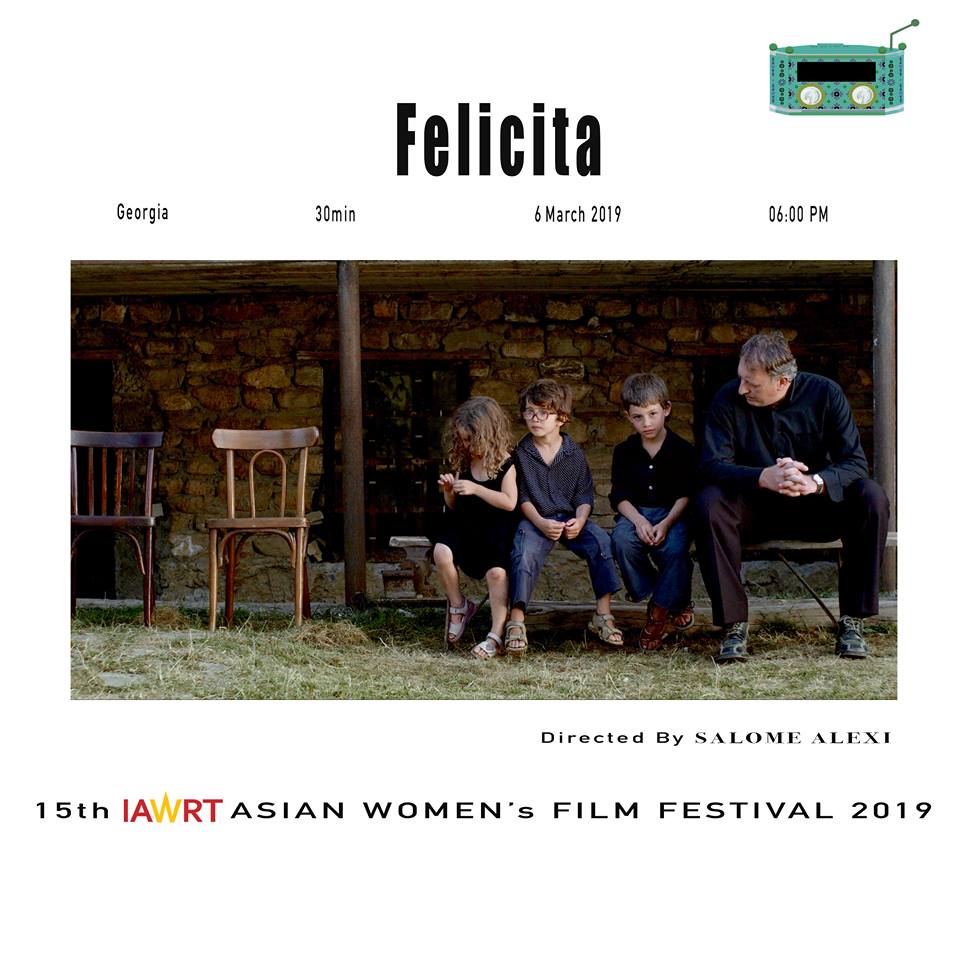 The main feture of day three was a unique morning segment, Soundphiles, which has become a kind of a flagship of IAWRT programming of the AFF, sowing the technical and creative aspects of silence and sound.

The closing film of the festival was the very evocative ‘Susa‘ from Georgia. Director Rusudan Pirveli and curator Smriti zeroed in on the impactful narrative once again around a child protagonist. The children centric films had prompted discussions ranging from casting child actors, to the psychological make-up of child characters to low- budget filmmaking. 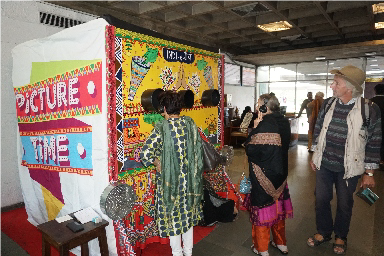 This included a life size bioscope titled Indi-e-gaze created with the support of students from Amity School of Communication, Noida and a creative art Installation by design students.

Indi-e-gaze, pictured left, as an installation explored both the ‘act of seeing’ as in the optical toy or later cinema with the new addition of ‘peeping into’ gendered texts.

The bioscope as a symbolic apparatus of a bygone era, took the viewer back to a pre-cinema experience while the content being watched was that of the female storyteller, whom we referred to as The Bioscopewaali.

The objective of holding the workshop within the festival ambit was to create a visible change in the domain of gender and identity. Forty girls from under-privileged backgrounds between the age group of 12-14 years were invited to undergo a two-day training on filmmaking. The resource persons for the workshop were IAWRT India members, Nina Sabnani and Samina Mishra. The girl students were given a theme of freedom (Aazadi) around which they had to frame their stories.

They were taken through an interactive session on self-expression, as well as a simple way of story telling by their two guides, and exposed to various images to spark their imagination. Sameer Ashraf, a professional photographer, briefed the girls about the technicalities of camera, which helped them to visualize their content better. The little directors were then asked to imagine freely and create their own short film. A young volunteer supported each group.

The workshop culminated with the screening of around 8-10 short one minute films made by the little directors.

This included a life size bioscope titled ‘Indi-e-gaze’ created with the support of students from Amity School of Communication, Noida and a creative art Installation by design students.

Indi-e-gaze, pictured left, as an installation explored both the ‘act of seeing’ as in the optical toy or later cinema with the new addition of ‘peeping into’ gendered texts.

The bioscope as a symbolic apparatus of a bygone era, took the viewer back to a pre-cinema experience while the content being watched was that of the female storyteller, whom we referred to as The Bioscopewaali.

The festival was widely covered in the media including: