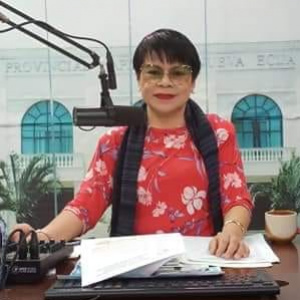 The IAWRT Philippines’ member is a veteran radio broadcaster and commentator and gender and development advocate.

Her retirement in 2019 gave her more options to continue with her passion and commitment.

She got more chances to accept invitations for webinars on online/hybrid teaching, as well as gender and development concerns find more slots in her schedule. She got more invitations to media affairs by media groups and press conferences of government and private institutions via zoom.

“Of course, not the least, by the National Union of Journalists of the Philippines on concerns such as women in media security and by the only one of its kind in the Philippines, the International Association of Women in Radio and Television (IAWRT),” she remarked.

This year, as the pandemic continues, she started several commentary programs via the popular forum, webinar, and meeting platform Zoom. As she said, she is only retired, but not tired.

ZOOM Forum: Panahon, Capio et.al officially started on June 5, Saturday, from 9 to 11am. Like a radio show, this was the timeslot of the said program. Capio saved the recorded video then posted it on Facebook.

The show, she said, is patterned after teleradyo (hybrid tv-radio) shows, and similar to a webinar but without or with fewer participants.

“It was intentionally for an interactive discussion between the two hosts on government public policies; academic freedom; career advancement; community involvement and gender and development or GAD,” she shared.

Her co-host is Engr. Honorato Peralta Panahon, Ph.D is an academician and communicator.

“He provided the foundation of our interactive discussion on Good Governance by providing the Requisites of Good Governance by way of the mnemonic device using Capio’s name: S – Spirituality, O – Organizational familiarity, N – National Identity, I – Integrity and A – Accountability. And above all: C for Competency,” she shared.

ZOOM Forum: Panahon Capio et.al aired its 13th episode on August 28 and would take a break in the meantime.

She started a series of webinars for gender and development for good governance, dubbed as “SOW GAD.”  The title’s meaning, she shared, is to sow the seeds of GAD for good governance. This one airs every Tuesday, from 9 am to 11 am. Go to Capio’s Facebook account to listen to the recordings.