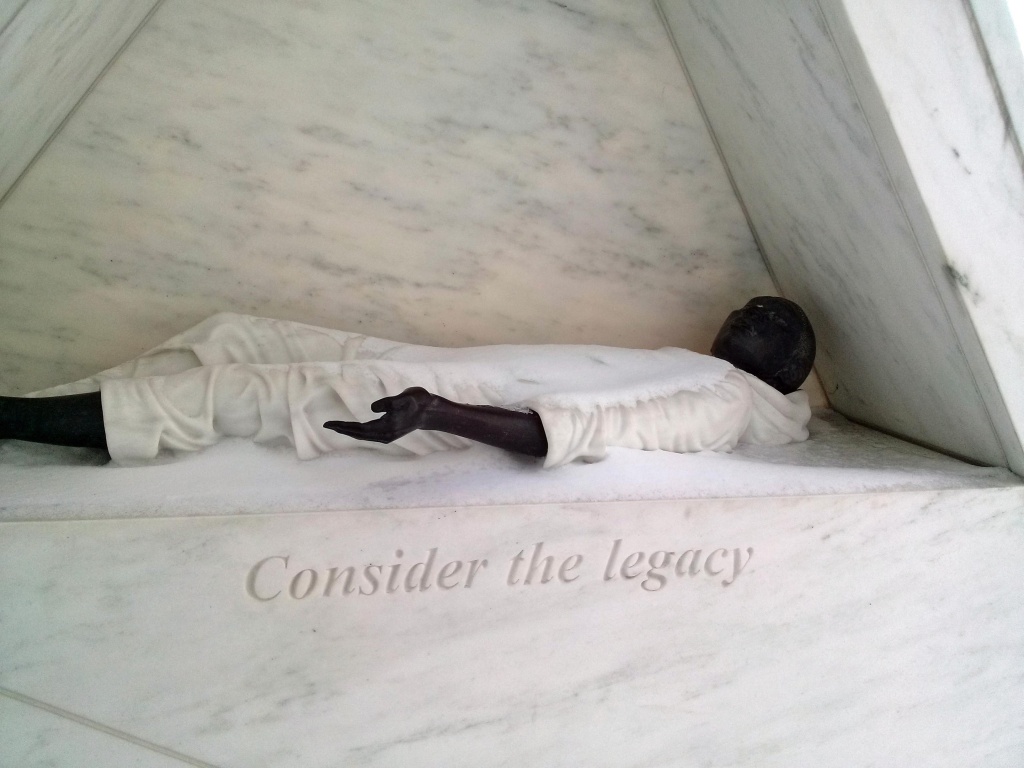 by Nonee Walsh from CSW61

On the plaza of the United Nations in New York,The Arc of Return is a moving memorial to more than 18 million people who were forcefully removed from Africa and enslaved. It “serves as a reminder to future generations not to repeat this tragedy” according to designer, Rodney Leon.

Yet in 2017 slavery, particularly female enslavement, is still big business. 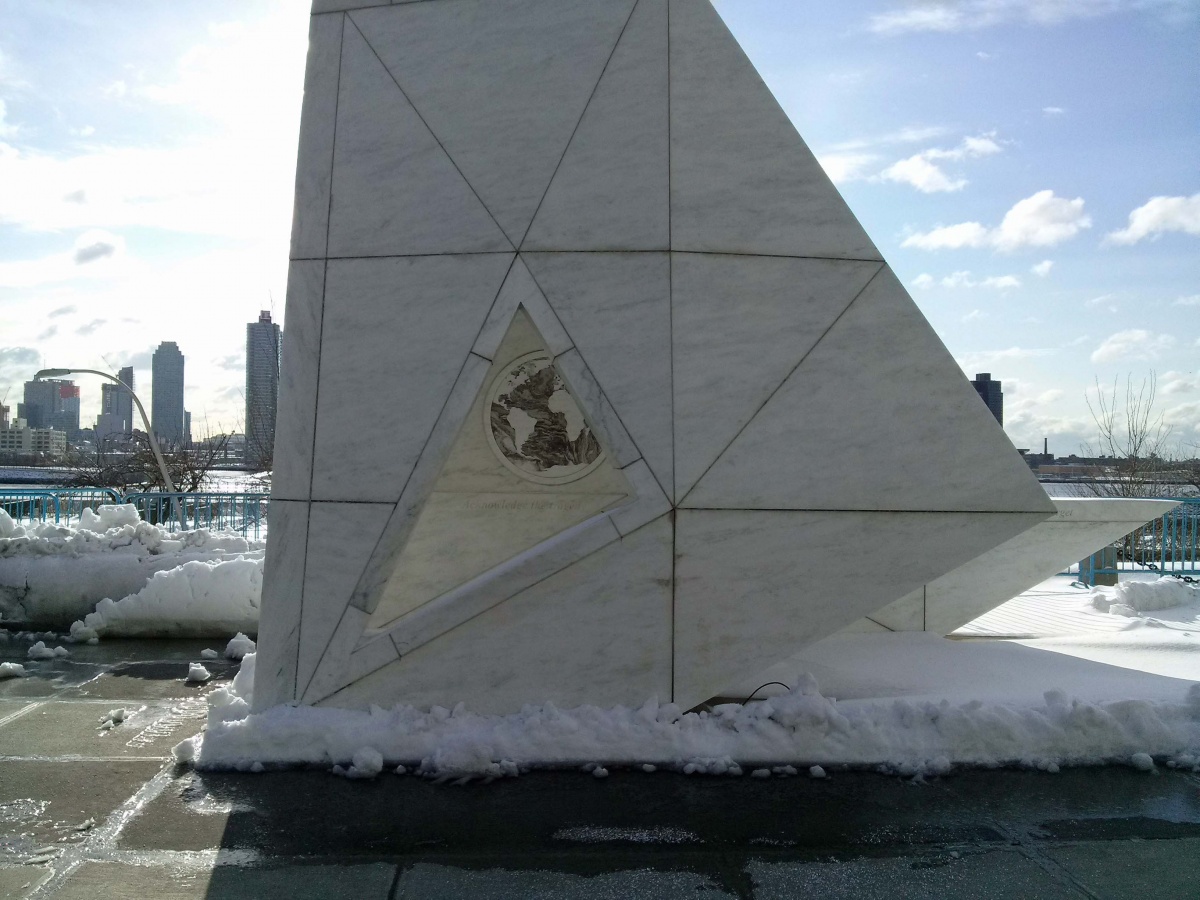 The Permanent Memorial in honour of Victims of Slavery and the Transatlantic Slave Trade feels like the cramped space of a slave ship. One carving depicts the obscene calculations of profit – drawings of how many human beings could be packed into a dank ships’ hold. Opposite, a prone statue of a slave has an outstretched hand meant for an interaction with the people who walk through, Leon says, “to generate a tear” of water which flows to triangular pools.

The pools point toward the United National building where in March 2017, the UN Ambassador for Liechtenstein, Christian Wenaweser said “estimates suggest that 46 million people have fallen victim to modern slavery and human trafficking.” More than half are thought to be women and girls. 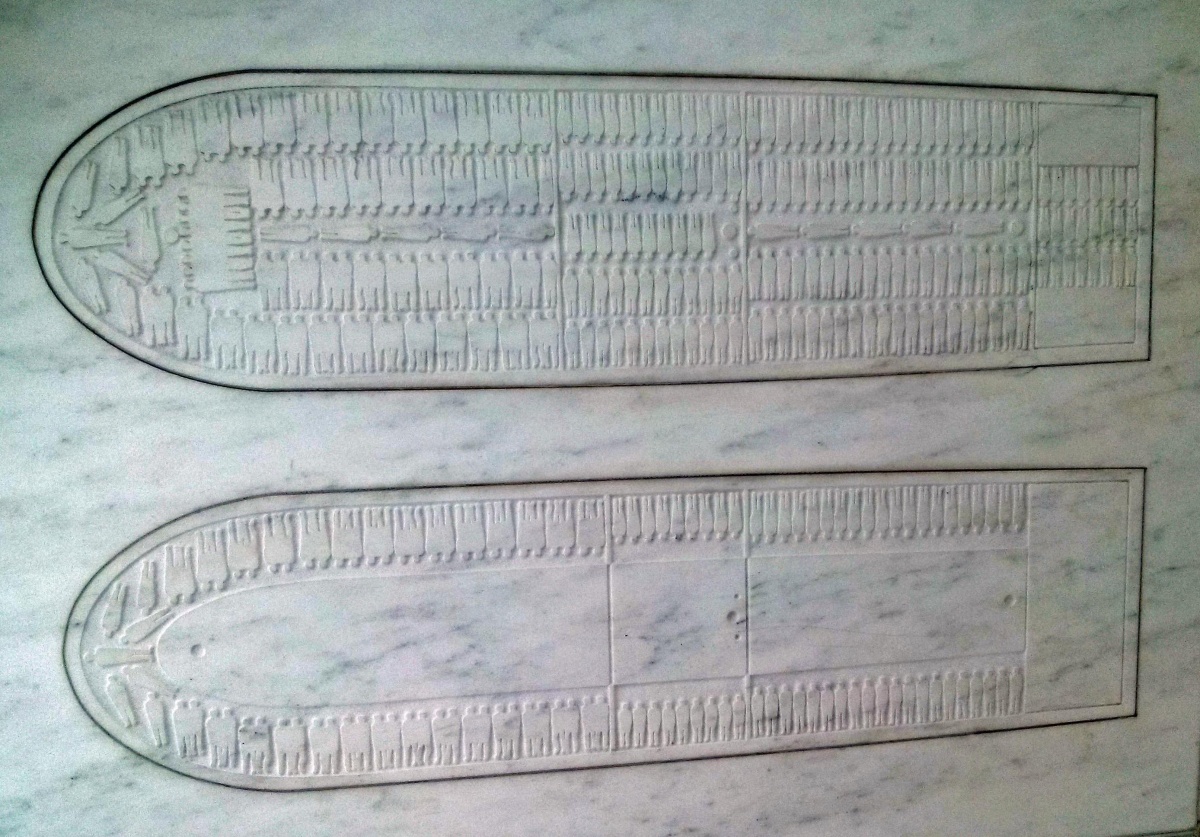 He was speaking at a side session to the UN Commission on the Status of Women, which was focusing on women and the changing world of work, about a rather established issue, gender and slavery. Wenaweser pointed out that 90% of countries have legislation criminalizing human trafficking. However, “convictions for these crimes amount to a mere fraction of the total number of perpetrators. The impunity gap is glaring” he said.

The CSW’s agreed conclusions recognised that widespread discrimination against women and girls makes them vulnerable to exploitation and slavery, which makes another 90 percent figure instructive. The World Bank estimates that in 90 % of the world’s economies (155 of 173) women face legal discrimination.

The International Labour Organisation (ILO) estimated that 150 billion US dollars was generated on the backs of 21 million slaves around the world in 2014.(ILO map below)

ILO Senior Forced Labour Specialist, Houtan Homayounpour, added “it is instructive that there can be such wide variations in estimates about slavery and there is to be a final effort to get the figures with some accuracy.”  The 2017 Global Estimates of Modern Slavery will be presented in November, details here. 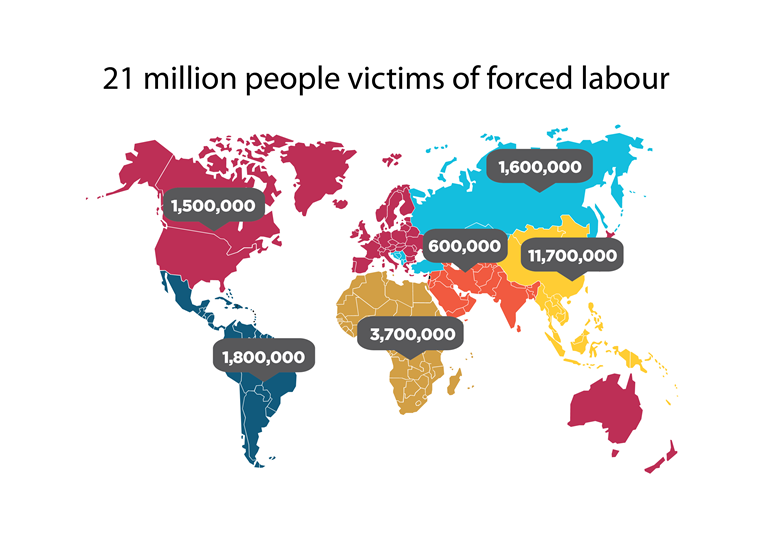 Certainly, from an economic point of view, the exploitation of females is well over half; “two thirds of the estimated total or US$ 99 billion, came from commercial sexual exploitation, while another US$ 51 billion resulted from forced economic exploitation, including domestic work, agriculture and other economic activities” according to Homayounpour.

Ambassador Wenaweser argued the need for an organized crime model to follow the money, and discussion recognised that action was also required on the demand side, to disrupt the flow of money to companies which pay for slave goods and services, albeit possibly unaware they are doing so.

The link between conflict and trafficking (recognised by the UN Security council in 2016) was raised by Judit Arenas from the International Development Law Organization. The Director of External Relations, and UN observer, observed that amidst a “global backlash against women’s rights” the rule of law, where it exists, was not being seen in many countries; She gave some examples, “in El Salvador and Cambodia where gangs are raping women and there is a fundamental lack of accountability for human rights violations.”

The Director of Anti-Slavery International, Aidan McQuade was not convinced the issue was fundamentally about law enforcement. He was blunt: “it is all about who has power.”

He argued that the fight about modern day slavery was “with governments, it is about all those power mal-distributions.”

“Slavery occurs legally” he said, using the example of child marriage, which is legal in many countries, and not considered or thought of as slavery “if the child/woman is not allowed to leave and her labour is used, then it is slavery. The issue is holding governments to account.”

In many countries, domestic workers are not defined as workers and lack access to the legal rights of other workers, “a socially permissible system of slavery”. “One third, of the world’s 67 million women workers, cannot even exercise the basic right to join a trade union” according to  Elizabeth Tang, the General Secretary International Domestic Workers Federation, she told an NGO forum “they are simply not recognized as workers in the legislation of many countries.”

The use of migrant domestic workers highlighted issues of slavery and trafficking according to McQuade, even where they are recognised as workers, “We are seeing wholly legal trafficking, facilitating enslavement, and the British system for domestic workers is not much better.”  He called it “a license for trafficking” because of the risk of deportation if an employee speaks out. The CSW final statement did make a call for gender-responsive migration policies, that promote migrant women’s economic empowerment.

His assessment was echoed at an NGO CSW/NY parallel event, Building power for Women Workers. Domestic workers unions from countries including the United States, outlined where entrenched sexism and racism excluded farm workers and domestic workers from labour rights. In the US, only 7 states have so far passed a domestic worker bill of rights. A Mexican domestic workers’ union has also achieved a minimum wage for workers in five states. Columbian and Cambodian union organisers spoke of legal and violent state repression of efforts to get rights for domestic and garment workers – all areas dominated by women.

In the closing remarks to the CSW61, the UN Under-Secretary-General and Executive Director of UN Women, Phumzile Mlambo Ngcuka, “congratulated the Commission for highlighting the plight of women in the informal sector who have no social protection.” And noted, “many migrant women employed in the informal economy and in less skilled work are especially vulnerable to abuse and exploitation.”

She emphasised the importance of one achievement in this area “for the first time, the transition of informal and domestic workers into the formal economy was a key issue of discussion for the Commission.”

In the NGO union forum, the difficulties and dangers in the struggle to engage isolated domestic workers, to bring them into the formal economy of workers’ rights was starkly outlined. In some cases, technology and the means to communicate with unions via email or online, has been a boon. However, as ever, technology is a two-edged sword. New Uber-like apps to hire domestic or care workers cheaply is again undermining wages and isolating employers from direct responsibility for payment. Technology is not exempt from labour laws, but is being used as an excuse to undermine labour rights.

CSW members agreed on the need of promoting decent work and paid care in the public and private sectors; increasing the provision of social protection and wages that “guarantee an adequate standard of living; and ensuring safe working conditions for women.”

Which takes us right back to denigration of the rights of women, which the director of Anti-slavery International says “leads to misogynistic abuses …. We need a paradigm in education centred on girls’ rights, to protect advance and empower them and sustainable systems against slavery.”

So, Aiden Mcquade concluded, “it is all about advancement of human rights.”

In brief, the CSW agreed conclusions in this area covered anti-trafficking strategies and laws integrating a human rights and sustainable development perspective; measures to reduce the vulnerability of women and girls to modern slavery and exploitation; and international cooperation in eliminating the demand that fosters sexual exploitation and forced labour.

If such human rights are reduced to money, the 120 million earned through slavery and trafficking is a drop in the ocean of potential. By 2025, according to McKinsey’s research, if men and women played an identical role in the labour market, the global economy could earn US $28 trillion. Even in a more achievable scenario, in which all countries match the rate of improvement of the fastest-improving country in their region, as much as US $12 trillion could be added to the world economy. Click for report.

UN Women Director Phumzile Mlambo Ngcuka says “This would prevent the possible threat highlighted by the World Economic Forum: that equality will take 170 years if we do not take the measures outlined.”

That surely is a reminder to future generations not to continue this tragedy.

We must take women seriously