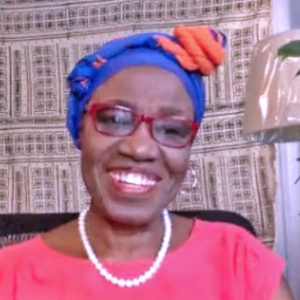 The 4th edition of the International Youth Conference was held on June 25 to 27 in Lake George, New York in the US and online.

“Look at me, I am Jamaican, I think I am Black. Or chocolate. I am an immigrant. I am also a US citizen, a British citizen and I am Jewish. So what are you going to look at me as? What gives you the right to define me or define any human being by just looking at them?” IAWRT USA President Sheila Dallas-Katzman zeroed in on her point about the importance of intersectionality by presenting her own self.

Tahil Sharma of United Religions Initiative and Javita Nauth of the Columbia School of Social Work joined Dallas-Katzman in the discussion. Atiya Abbas from Pakistan served as the moderator of the discussion.

Dallas-Katzman recalled the work of Kimberlé Crenshaw, and her theory of intersectionality when she published a paper in the University of Chicago Legal Forum in 1989.

“I am talking about women suing years and years ago,” she stressed.

“Crenshaw said the court’s narrow view of discrimination was a prime example of the conceptional limits of single-issue analysis regarding how the law considers both racism and sexism as it relates to these stories. It brings to mind Chimamanda Ngozi’s Adichie ‘Danger of a Single Story’,” said Dallas-Katzman.

She recalled that a court decision in 1976 that working together racism and sexism unworkable. The court ignored specific challenges that Black women face by being a Black, being a woman and often a combination of the two, she said.

“The dilemma of an individual or the body that represents multiple identities… You can ask me where in my body I am feeling Black, where I am feeling as a woman, where am I feeling Jewish. Where in my body is it? Is it cognitive? Is it my body? It’s who I am. It’s the whole of me,” said Dallas-Katzman.

Dallas-Katzman also spoke of climate justice being an issue of intersectionality.

“Looking at global warming, notice who are being affected, who are we closing our borders to. It is our privilege that we can look the other way and continue with our lives despite the protests… and so everything is in order. Maybe we should look at environmental justice as another form of intersectionality,” she asserted.

Dallas-Katzman is currently involved in a number of organisations that champion major socio-cultural global challenges including gender, racism, poverty, and violence. Sheila is currently President of the International Association of Women in Radio and Television USA (IAWRT-USA) and Chair of New York City for the UN Convention on the Elimination of all Forms of Discrimination against Women (CEDAW).

She is a facilitator for workshops aimed at dissecting racist beliefs and behavior using Sociodrama and theatre of the oppressed methodologies to enable self-reflection and engender behavioral change through action methods. She is also involved, at the community level with an anti-racist working group within her synagogue.

The conference organizers explained the significance of this discussion is that the intersection of various identities (social and political) of a person plays a role in how they are treated. A person’s race, ethnicity, gender, sexual orientation, nationality, and/or disability among others play a vital role in determining their privilege or how they will be discriminated against. Many young people hail from backgrounds where they experience inequalities based on who they are.

The world’s youth population, ages 15 to 29,  is estimated at 1.8 billion. This group makes up a significant group in the world (that has an estimated 7.8 billion population in 2020). Yet oftentimes, the youth are excluded from participating at various levels of family, community, and institutional decision-making processes. Being inheritors of the planet and their societies, and their abilities to participate and lead, the concerns and voices of the youth must be considered and they must be engaged in taking part in solving the world’s problems, hence the impetus for such gathering.

In more than 25 sessions, the conference attracted 54,810 live audiences and 4,394 registered participants, 46% of them female, from 172 countries over three days.

To watch the discussions at the conference and know more about the IYC4, go to this Facebook page.