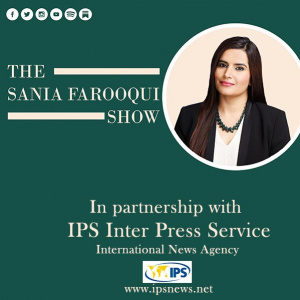 “At a time when the media is going through one of its toughest moments, I wanted to create an independent platform where I could utilize all my journalistic skills, passion for storytelling, to provide individuals across the globe with reliable information, sharp thoughtful discussions, counter disinformation and stereotypes,” said Farooqui.

Last year, during the lockdown imposed due to the pandemic, IAWRT India chapter member Sania Farooqui decided to launched her self-titled show where she has been speaking to Muslim women from across the world.

The first series of the show is called, ‘Not Just About The Sharia’; discussions that aim to highlight the struggles and challenges of Muslim women, on their own identities and also how the current climate of global politics, including Islamophobia and Xenophobia impacts their lives.

These conversations are followed by an opinion editorial, covering a particular theme/angle of the interview which is published by Inter Press Service or IPS, a global news agency based in Rome. This platform reaches a wide range of readers and viewers. Season II of the show will be launched in partnership with IPS.

Farooqui, a journalist based out of New Delhi, India, has been covering gender equality, discrimination against ethnic and religious minorities across the world.

She has also previously worked both in London and in India with CNN International with two of its flagship programmes, Connect The World with Becky Anderson and Quest Means Business with Richard Quest, TIME Magazine, Al Jazeera, Mambo Panda, NDTV, The Guardian, The Indian Express and many more.

And her other works: