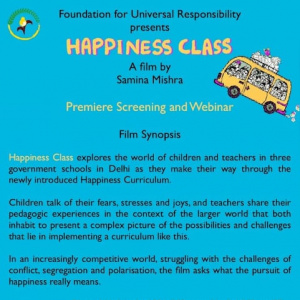 Mishra’s film was commissioned by the Foundation for Universal Responsibility to be made a year after the ‘Happines Curriculum’ was introduced.

Happiness Curriculum is an educational program for children in grades 1 to 8 in the schools run by the Government of Delhi in India since July 2018 and was thought to be a reformative step in school education in India.

This tied to the filmmaker’s own personal interests and body of work.

“My work is mostly around the ideas of childhood, and I also write for children and work with them using the arts. I am interested in making space for children’s voices to be heard in mainstream spaces and for adults to pay attention to children’s experiences instead of merely speaking on their behalf,” Mishra said.

The objective of the Happiness Curriculum is to improve the mental well-being of pupils. The curriculum is based on philosophies of thinkers and educationists such as Mahatma Gandhi, Rabindranath Tagore and Jiddu Krishnamurthy. The curriculum also includes concepts about self and relationships with family, society and nature.

The curriculum employs techniques such as mindfulness, reflective stories, interactive activities, and expression to equip pupils with the necessary skills and mindsets to answer the following questions: What makes me happy? How can I be an instrument in other people’s happiness?

The film was shot before the pandemic and the rough cut was finished two weeks before the lockdown was announced in India.

“The film lay still for 6 months or so. I think this did help the film – I had always thought of using animation but because I could not shoot any more, the way I used the animation changed,” the director shared. 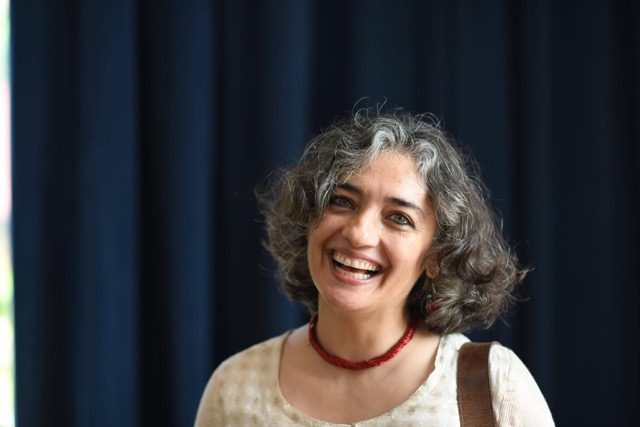 While work on the film paused and slowed down, Mishra thought her own experience of the pandemic and lockdown influenced both the process while editing continued up to reaching the final film.

Mishra said the film is intended for a general audience because everyone engages with children in different ways.

“What we can understand from their lives can also be applied to our own. So I would hope that a general audience watching the film would understand that children are part of our world, they don’t and can’t be expected to inhabit some segregated corner of it. So in trying to understand the place of happiness or sadness in children’s lives, we can understand it in our own,” she said.

But apart from the general audience, she hopes the film reaches teachers and education policy makers who Mishra feels “need to listen to such voices and pay attention to such experiences.”

What could be one of her greatest takeaways in making the film? That we must strive to create beauty with kindness and grace.

“I felt privileged to be working on something that I really wanted to in this terrible time of deprivation and difficulty. So, I think gratitude for the people we work with, including those whose stories we tell, and for the pleasure that work we believe in brings to our lives is really important,” she said.

And so, the filmmaker thanks her fabulous crew.

“Tenzin Kunchok, Anish Pavitran, Nitasha Kapahi, Dilip Chaudhari and I did the shooting and sound. Tenzin also did the editing which was spread over many months. The animation has been done by Alia Sinha. Shireen Ghosh did the music along with an original rap song by a group of young boys who create music under the name of Dean Swag X Kranti Ke. Sameera Jain made valuable inputs as consulting editor, the sound mix was done by Asheesh Pandya and colour correction by Sonu Singh,” said Mishra.

The film’s producer is Rajiv Mehrotra of Foundation for Universal Responsibility and the film was given additional financial support from Mekin Maheshwari of Udhyam Learning Foundation.

The online screening is accompanied by a webinar with the filmmaker and education practitioners, scheduled on April 30, 6pm IST. Register here.

For more information, check out the film’s page on Facebook.