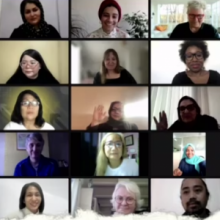 Courage, compassion, and commitment in the face of challenges—these were demonstrated by the women journalists and researchers who shared their stories on March 8, International Women’s Day.

Organized by the International Association of Women in Radio and Television (IAWRT) and the Journalism and Media International Center (JMIC) at OsloMet, the online event “Challenges to the Safety of Women Journalists” was moderated by Elisabeth Eide, veteran journalist, writer, and professor of journalism studies. IAWRT President Violet Gonda opened the program, while Prof. Oona Solberg of OsloMet delivered the closing remarks.

The discussions revolved around the obstacles women journalists face in different parts of the world, and how they continue to stand up against threats and attacks. The momentous event brought together eleven speakers from Europe, Africa, Asia, and the Middle East:

Among the highlights were the sharing of the speakers from Ukraine and Russia. With all eyes on their respective home countries, they talked about the experiences of journalists who stayed in Ukraine despite being targeted by the Russian army and facing threats of harassment and rape. They expressed their support for Russian journalists who continue to speak the truth amid the ban and shutdown of all independent media, and the detention, torture, and killing of journalists and human rights defenders.

During the program, participants also witnessed a performance by IAWRT Philippines member Marilyn Mirana, who sang “Easy to Lose Hope” against a backdrop of images of women displaying messages of support for journalists and media workers. The song was dedicated to Veronica Guerin, a crime reporter from Ireland who was murdered by drug lords in June 1996.

The keynote presentation provided a glimmer of hope, as it featured the Digital Safe House (DSH) for Women Journalists spearheaded by IAWRT and International Media Support (IMS) with IAWRT Philippines as beneficiary. A pilot project, the DSH in the Philippines is an online platform featuring a reporting mechanism for Filipino women journalists under threat or attack, as well as a portal of resources such as safety training, peer support and counseling, and legal assistance.

Inna Berezkina from Russia, speaking from exile, said, “I hope people will be judged by their deeds, not the color of their passport because evil has no nationality. And I believe that solidarity shouldn’t have it either.”

The online event provided a venue for women across the globe to listen to each other’s stories and strengthen their solidarity in order to overcome the common struggle against threats and attacks on female truth-tellers.