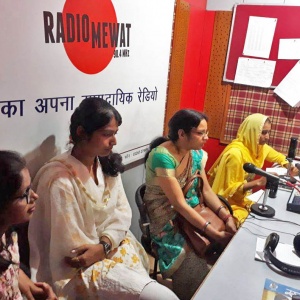 Radio Mewat is a community radio in the most backward district in India.

Mewat has one of the lowest media penetration in the country, but a high mobile phone penetration, which also doubles up as a potent radio listening-tool.

It was 9:31pm, on April 8, 2020,  Imran a reporter with Radio Mewat had just parked his motorcycle outside his house, 10 kms away from the community radio station, when his phone rang. He was surprised to see the District Collector’s (DC) number, he answered the phone.

DC: Namaste is your radio on?

DC: Ok, I want to make a public announcement.

Imran: Sure Sir, please go ahead.

DC: You will record now and will you be able to broadcast it?

The Collector gave his message that they will be sealing around 120 villages because of the spike in COVID-19 cases, and there will be a complete lockdown post 2pm the next day. He provided a number that people could call; home deliveries of essentials would be provided. At the same time, he appealed to shopkeepers to register their willingness to be part of the home delivery chain. He urged the people of Mewat to stay calm and not panic.

He asked Imran if this could be broadcast now. Imran replied yes. That Radio Mewat will not only broadcast it right away, but will repeat it several times, answer queries related with this and rebroadcast it in the morning, too.

Imran immediately sent the audio file to his colleague who was doing a live show on Coronavirus from the studio. The message was broadcast at 10:01 pm and repeated several times till 11:30 pm. The Chief Administrator had decided to break news on the district’s community radio station.

But this was not the only time that Radio Mewat, help had been sought by district administration.  Ever since the outbreak of COVID-19, the Superintendent of Police, the Chief Medical Officer and others had used the radio to inform the people of Mewat about the spread of the disease, how to stay safe, how to protect one’s self and their families, what time the fair price shops would open to where migrants could get free food and more.

Ever since the pandemic broke out, Radio Mewat has reworked its schedule to include more of COVID-19 related information. Daily, five to six bulletins are being broadcast, besides sharing stories of how people during lockdown, how lives of farmers, daily wagers, shopkeepers, mechanics and others were being impacted. 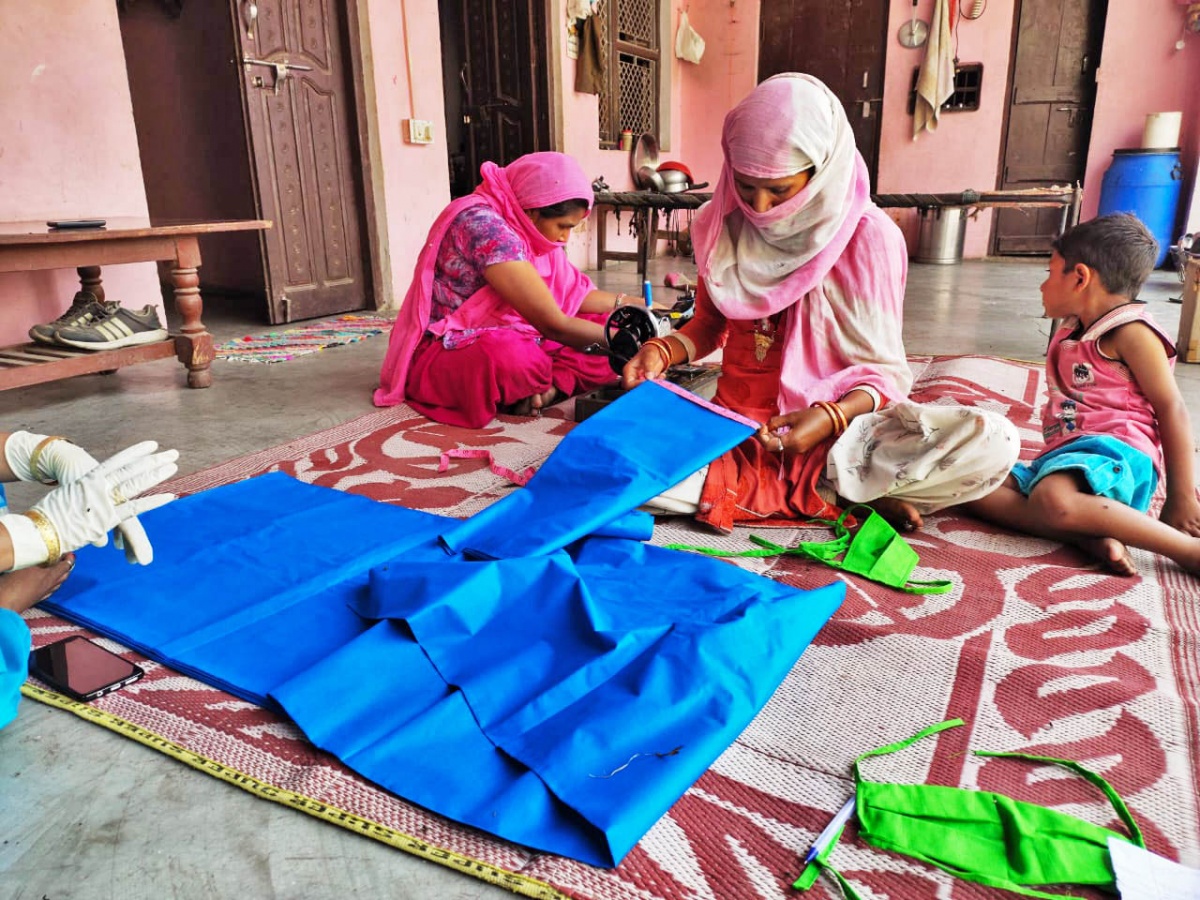 Women are the main focus of the radio, but they have limited access to the mobile phone. To tide over this problem, the women reporters of Radio Mewat had been narrowcasting programmes on women’s health and nutrition, addressing domestic violence, teaching them thrift, investing in children’s education, etc. This gave the reporters an opportunity to not only share their programmes but also listen and record stories of the women and the challenges that they face. Today, in the lockdown period, Radio Mewat’s women reporters are calling 20-30 women every day to check on them, listen to them and give them an opportunity to speak and voice their concerns.

A hyper local medium that believe ‘giving voice to the voiceless’ as its primary role, Radio Mewat has changed its tag line to, ‘Community radio cares for its community’. It is also providing livelihoods by engaging with its women listener groups, most of them victims of violence, to stitch masks. The reporters have got curfew passes issued, and are going from village to village to deliver the cloth, collect masks and make payments. This has given them an added advantage of checking in on their listeners and their well-being.

Unlike many other mediums that have suffered due to slowdown, Radio Mewat has been standing strong in this hour of crisis and serving its community without fear or favour.

Mewat (now Nuh) in Haryana is the most backward district in India. Many of the locals seem to have been infected by a globally itinerant clergy belonging to Tablighi Jamaat, which incidentally was founded in Mewat in 1926.

The people of Mewat, largely Muslim, subsist on seasonal livelihoods. Mewat is not far from Gurgaon and Delhi, but is home to some of the most vulnerable and marginalised groups in the country, including more than 2000 Rohingya refugees. 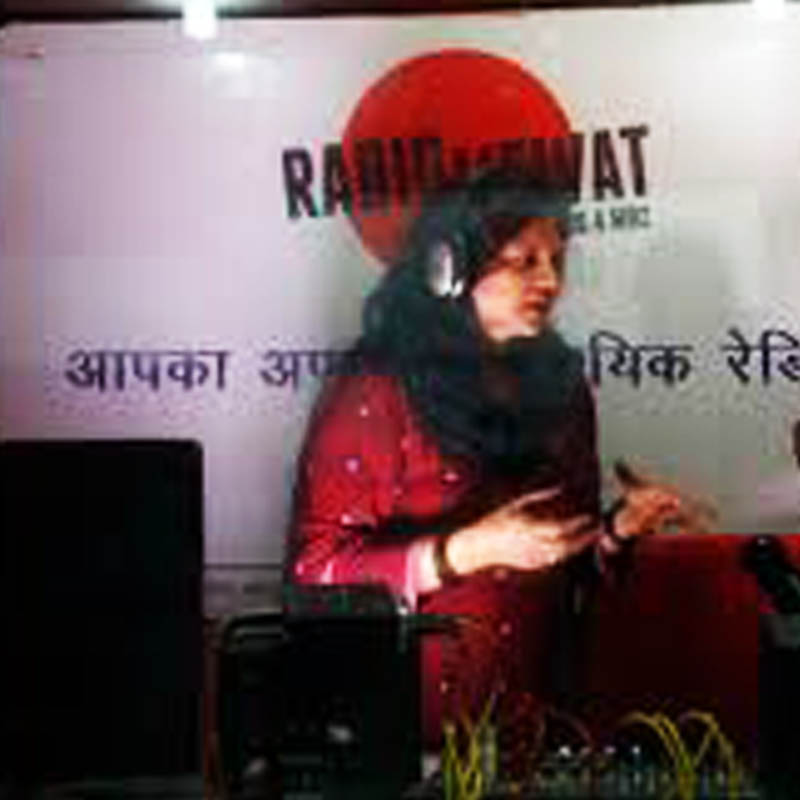 Until March 31, 2020, this district did not report a single case of COVID-19. However, in less than two weeks, Nuh saw an explosion of coronavirus cases. The number of positive COVID-19 cases in the district went up from 1 to 58 in less than 3 weeks, primarily due to the returnees of Tablighi Jamaat testing positive. The one and only Medical College was turned into a COVID-19 center with patients ailing from other diseases, shifted to other facilities.

Lack of clean drinking water, paucity of running water and with evidence of a prevalence of low sanitation and hygiene, there is little awareness of the urgency for washing hands regularly, covering their face and not spitting in the open. Over and above this the non-existent medical infrastructure comprising doctors and frontline medical workers, the people of Mewat could be seeing a calamity in the coming days.

Mewat has one of the lowest media penetration in the country, with barely 10% homes owning TV sets. However, the area has a high mobile phone penetration, which also doubles up as a potent radio listening-tool. There is an urgent need to curate and disseminate content with a local perspective, in the local dialect, by a credible media tool which does not only serve as a bridge between the administration and the community, but has also earned the latter’s trust amongst the highly illiterate and suspicious population. The information sharing needs to be updated, relevant and moulded to the local sensibilities of the community. This makes Radio Mewat the ideal medium to create awareness regarding COVID-19 and the dissemination of timely and credible information.