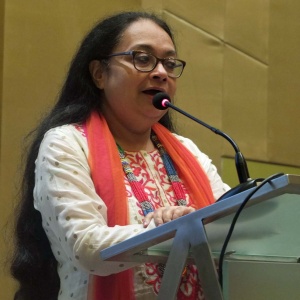 Ananya Chakraborti, the Vice President of IAWRT International, has accepted a new position as the Chairperson of the West Bengal  Commission for the Protection of Child Rights. Ananya says she is looking forward to the challenging assignment.

The state government body exists under the National Commission for Protection of Child rights, which was formed in 2005. She expects the most challenging aspects to be twofold: to ensure that every child gets access to education, and every child is safe from any form of abuse, sexual or otherwise.

Now in its third year of operation, the state commission has the broad mandate to protect the rights of all children, regardless of income or social status.  The work of the six-member (plus Chairperson) commission covers the entire state of Bengal which includes one of the largest cities in India, its capital Kolkata, and has a population of over 91 million people. It is bordered by the countries of Bangladesh, Nepal and Bhutan and is constantly coping with the challenges of migration and trafficking.

The organisation has the functions of both monitoring the effective use of numerous laws to protect children, and educating to make protection of children a central part of social culture, not just the law. The West Bengal state’s second Child Protection Day was an example of this type of role, in 2016 the theme was “stop child labor, start education”. Media report here.

The Commission has the power to receive and investigate complaints, recommend prosecution or action, initiate court test cases or investigate any violations of children’s rights. It engages in data collection and research, regularly reporting publicly and to government. This work fed into the National Commission on issues such as the right of children to education and health, protection against sexual crimes, forced child labor, child marriages, juvenile justice and investigating how authorities, such as Police, respond to crimes against children or minors.

Ms Chakraborti, who worked extensively on trafficking in South Asia through an IAWRT funded project for five years, says she is looking forward to doing further work for trafficked minors through this new position.

She was selected for the role of Commission Chairperson after a career which has included over twenty years as a journalist in print and television media, as an award winning documentary film maker, media educator and researcher.

Apart from this responsibility, Ananya will be a member of the West Bengal Woman’s Commission and also Chair the Kolkata District complaints committee to prevent, investigate and redress sexual harassment in the workplace for women.

“I thank IAWRT and FOKUS for supporting me in my trafficking project. I have strong reasons to believe that the work that I did during those five years was partly instrumental in making the State of West Bengal consider me for this position.”