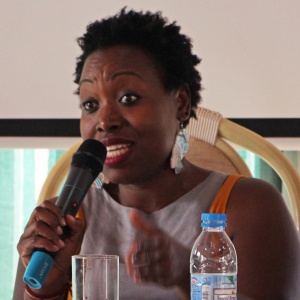 Her Zimbabwean passport has been returned after an 18 year struggle which included a deportation drama when returning from attending the 2nd IAWRT Nepal Women’s Film Festival and African Film Festival in Kathmandu in December 2018.

Violet Gonda returned home this year (on a UK passport) after 17 years in exile, having been banned from Zimbabwe by the former President Robert Mugabe over her reporting on human rights atrocities mainly through SW Radio. In 2018 she reported on the elections which returned Emerson Mnangagwa to the Presidency which he took in a coup the previous year.

However, Violet was stunned to find out that she was still on a a so-called ‘stop list’ when she applied for the return of her passport. Her online reporting and work on Twitter and Facebook had raised the ire of some in the Mnangagwa government, and despite being promised a new passport after a successful court challenge by the Zimbabwe Lawyers for Human Rights (ZLHR), it had not been issued when she travelled to Nepal on IAWRT business.

Her Ethiopian Airlines plane was even held on the tarmac when an immigration officer said Violet was going to be deported. He mocked her recent reporting, saying that she was an activist who faced down soldiers but who cried when threatened with deportation. Eventually after a lawyer from Zimbabwe Lawyers for Human Rights (ZLHR) intervened Violet was allowed 30 days to prove her citizenship.

This time after submitting another application her passport was issued. ” No more arriving in Zimbabwe as a foreigner and paying $55 visa fees, No more regular visits to immigration offices to renew my visitor’s status. No more fear of deportation – I AM A ZIMBABWEAN – FULLSTOP’ she said.

Violet says, “A stop-list has no place in a so-called new dispensation!”. She thanked the Zimbabwe Lawyers for Human Rights – especially Mr. Denford Halimani who negotiated to stop her deportation from Harare airport in December.