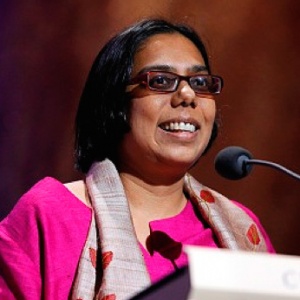 January 28, 2015 – New York, NY – The NGO Committee on the Status of Women, NY (NGO CSW/NY), one of three women’s committees of CoNGO that advocates for women’s rights and gender equality, is pleased to announce the 2015 NGO CSW Forum Woman of Distinction awardee, Ruchira Gupta from India, founder of Apne Aap Women Worldwide.

After winning an Emmy for her documentary on sex trafficking, The Selling of Innocents, Gupta started Apne Aap Women Worldwide, an anti-sex trafficking organization in India that empowers more than 20,000 low-caste girls and women and their family members affected by prostitution. She received the Clinton Global Citizen award for giving a voice to the voiceless and for tenaciously standing by the last girl in brothels in Bihar and India.

For over 25 years, Gupta has worked to end sex trafficking by emphasizing the link between trafficking and prostitution laws and lobbying policy makers to shift blame from victims to perpetrators. In 2000, she testified in the United States Senate before the passage of the Trafficking Victims Protection Act and addressed the UN General Assembly on human trafficking.

Gupta will be the keynote speaker at the NGO CSW/NY Consultation Day (8 March 2015 at the Apollo Theatre) along with Phumzile Mlambo-Ngcuka, UN Under-Secretary General and Executive Director of UN Women. The formal presentation of the NGO CSW/NY Woman of Distinction award will take place at the annual NGO Reception (9 March 2015 at the Armenian Convention Center Ballroom, 6 pm–8 pm). This year’s theme of the UN Commission on the Status of Women is the 20th review of the Beijing Platform for Action. Registration is available at: www.ngocsw.org.

About the Women of Distinction Award

This annual award is given to a woman in recognition of her leadership in the struggle for gender equality and women’s empowerment. The honoree is a leading activist from a developing country who can address the theme of the CSW, will benefit from participation in Consultation Day, and make a difference when she returns home.

About the NGO Committee on the Status of Women, NY

The NGO Committee on the Status of Women, NY (NGO CSW/NY) is one of the three women’s committees of the Conference of NGOs in Consultative Relationship with the UN (CoNGO). Under CoNGO’s umbrella, the NGO CSW committees helped plan the NGO Forums at the UN World Conferences in Mexico, Copenhagen, Nairobi, and Beijing. NGO CSW/NY is a volunteer-based, non-profit NGO funded largely by individual contributions.