Across the globe from Uganda to Kurdistan to the USA, IAWRT members were involved  the 16 days of activism against gendered violence.

In Uganda statistics indicate 49% of women and 41 % men believe a man is justified in beating his wife for specific reasons. 56% of women aged 15 to 49 years have experienced physical violence at least once since the age of 15. 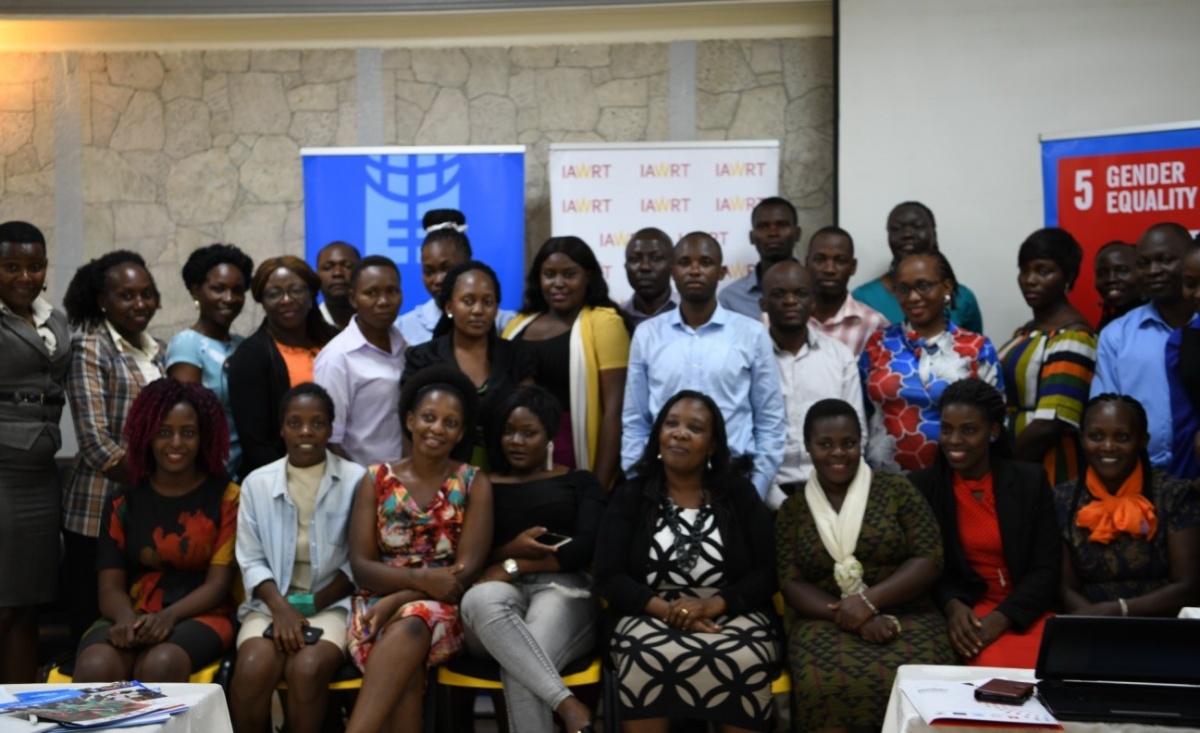 The Ugandan statistics are representative of the real lives of women and girls in that country and the IAWRT Ugandan Chapter believed that media has the responsibility to demystify and personify these statistics. This is needed for the public to fully understand the true meaning of violence against women and the related negative impact on lives.

Against this background the IAWRT chapter, in partnership with UNWOMEN thought it right to mobilize the media to discuss the role of media in influencing the public response towards the fight against gender-based violence against women and girls.

As one of the activities to contribute to the 16 days of Activism against Gender Based Violence, a media engagement was held in Kampala on the 27th of November 2019.The full day engagement that aimed at creating public awareness in the fight against GBV, brought together 65 participants including editors, senior journalists, bloggers and other stakeholders from like-minded organizations.

The purpose was laying a foundation for the media to fully understand and actively contribute to creating public awareness on ending violence against women and girls. 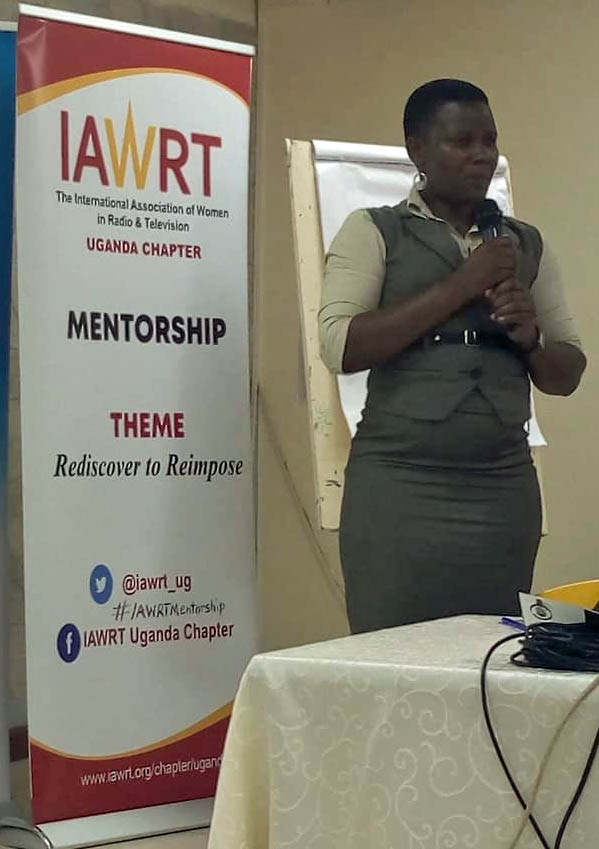 Nankwanga Eunice Kasirye, the chapter Head IAWRT Uganda, made the opening remarks with an emphasis on the day’s specific objectives, of  briefing the media on 16 days  of activism activities, enabling participants to obtain a clear understating of the 16 days of activism, upskilling the media to identify story ideas during the 16 days of activism and lobbying for media promotion of positive portrayals and fair treatment  of women. She highlighted the vital role the media has in raising awareness of GBV by setting the agenda with the power to dictate public perception.

Eunice challenged the media and individual journalists to seek out knowledge and information on gender reporting since it is a sensitive and delicate subject which requires full authority and confidence to take on.

“The subject of gender violence calls for ethical professional reporting, requiring fairness, honesty and accuracy. Otherwise, a lack of such values may instead seem to condone violence against women and girls.”

Without thorough knowledge of gender equality, Eunice says it is literally hard for a reporter to come up with a captivating story pitch to the editorial team therefore making it almost impossible for gender related stories to find space in bulletins and publications.

She called upon IAWRT members, wherever they are, to take centre stage in promoting, lobbying and setting the pace to achieve a gender sensitive Media. That should start with individual responsibility to avoid negative stereotypes of women in media reports and ensuring positive portrayal is emphasized.

Supporting one another as media women is one other approach to attaining positive portrayal of women in the media, women in different media organization structures should deliberately help each other to be better at their tasks through continuous improvement and positive criticism, and more women should meaningfully take up positions at the decision tables.

Eunice challenged women to desist from trivial differences, backstabbing, intrigue and blackmail but concentrate on building a formidable professional, reliable and objective force to make, enforce and oversee critical decisions that affect the space of a woman in the media. 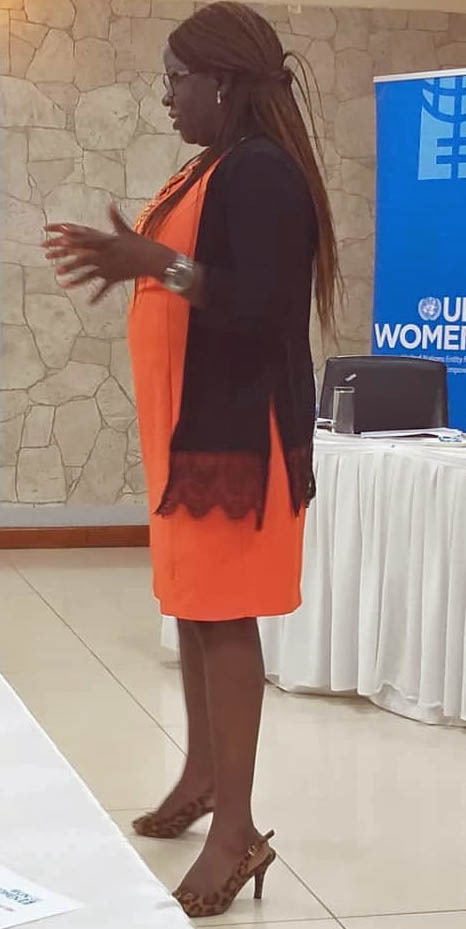 Evelyn Letiyo, a program specialist with the UN women in Uganda discussed the connection between gender violence against women and power. According to Evelyn, people with power are never abused but those without power tend to accept some levels of abuse just to survive and be in the ‘good books’ of those in power.

“Gender Based Violence are acts that result or are likely to result into physical, sexual harm to women including threats of such acts, coercion, arbitrary deprivation of liberty, whether occurring in public or private life”

“Violence starts slowly with subtle nonphysical acts until it graduates into physical violence, sometimes escalating into permanent damage or death. Consistent threats should not be ignored because with time they are put into action” She said.

Evelyn Letiyo cautioned the media against being judgmental while reporting incidences of GBV, saying understanding the context of the entire story is more important than rushing to file a story because in that process the media end up hurting the innocent persons.

She says violence against women manifests in a number of ways easily seen but the violence extends beyond the physical to psychological and mental forms of violence.The abusers also move with trends in technology taking advantage of the internet and its diversity.

“Such continuous manifestation of violence against women calls for continuous media refresher courses and capacity building interventions to ensure the media helps in the fight against GBV with a deliberate approach to protect the victim and helping them to survive and live past the abuse.”

Martin Ninsiima the Communication and Advocacy Specialist at UN Women Uganda, called upon the media to deliberately champion the positive portrayal of women at all times. “The media should be gender sensitive in preparing content such selecting panellists for shows and programs, choosing sources for key stories, internal media house recruitment and management structuring among other approaches”. Martin emphasized that the media has the power to influence general perceptions of issues of concern therefore should use the same power to promote positive portrayal of women.

He encouraged the journalists to come up with well thought out story pitches on GBV and said that UN women would be able to support the production of such stories.

Counsel Carol Idembe, the GBV program Manager at the inter Religious Council of Uganda, appealed to the media to use a survivor-centred approach that seeks to empower survivors by putting them at the core of the healing process while reporting on GBV issues. According to Counsel Carol, the  journalist  following up on a GBV  story  should recognize that each person is unique, reacts differently to GBV, has different strengths, resources and coping mechanisms, has the right to decide who should know about what has happened to them, and what should happen next.

“GBV is a manifestation of power inequality, and reporters should desist from imposing their own perspective to avoid disempowering survivors.”

Dealing with GBV survivors in a survivor-centred manner involves prioritizing their best interest, and applying the guiding principles of safety, confidentiality, respect, and non-discrimination, Carol emphasized.

On November 30, Awaz Abdulla participated in a short movie festival about gender-based sexual violence in Erbil. This was supported by Internews.

In the festival eight short movies were presented by different directors from the provinces of Iraq and the Sulaymaniyah governate.The project goal was to challenge society’s reaction towards survivors of sexual and gender-based violence by supporting journalists and women human rights defenders to focus on sensitive issues through coordinated reporting and advocacy. 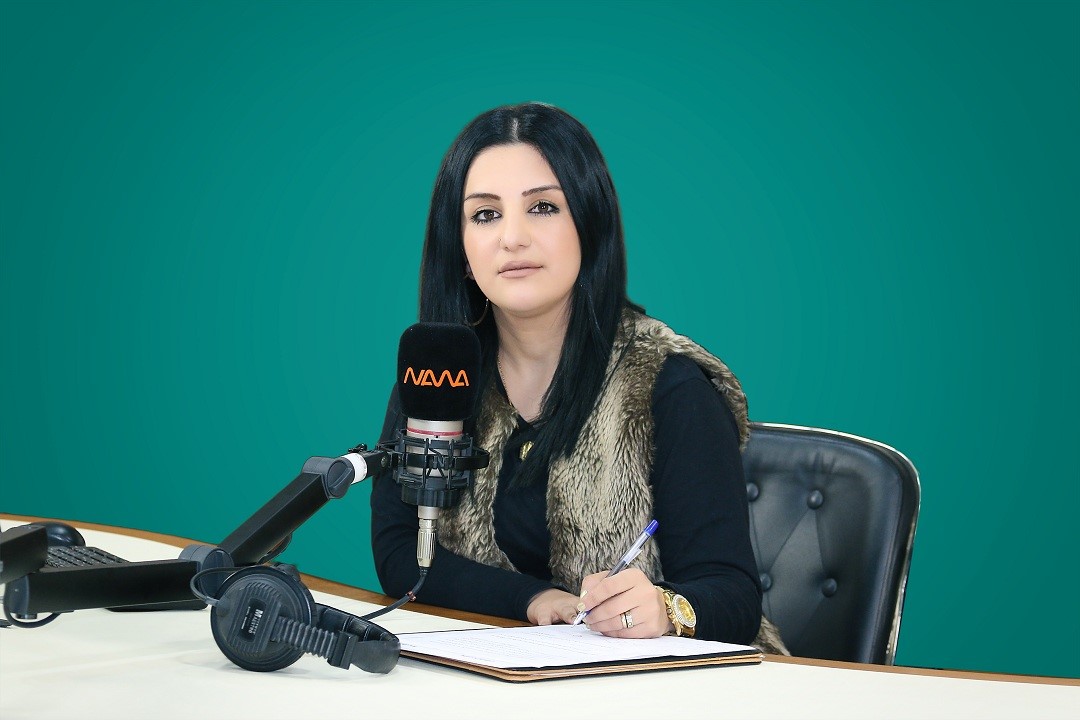 On November 24, Lava Kurd prepared and presented the Shaqam program at Radio Nawa for November 25  for this year the international day to end violence against women.

According to the program, female employees was a motto for this year and during the program Hannah Shwan – women’s rights activist and Avin Nasreen, a journalist, discussed the media’s role in reducing violence against women and spreading awareness in society. 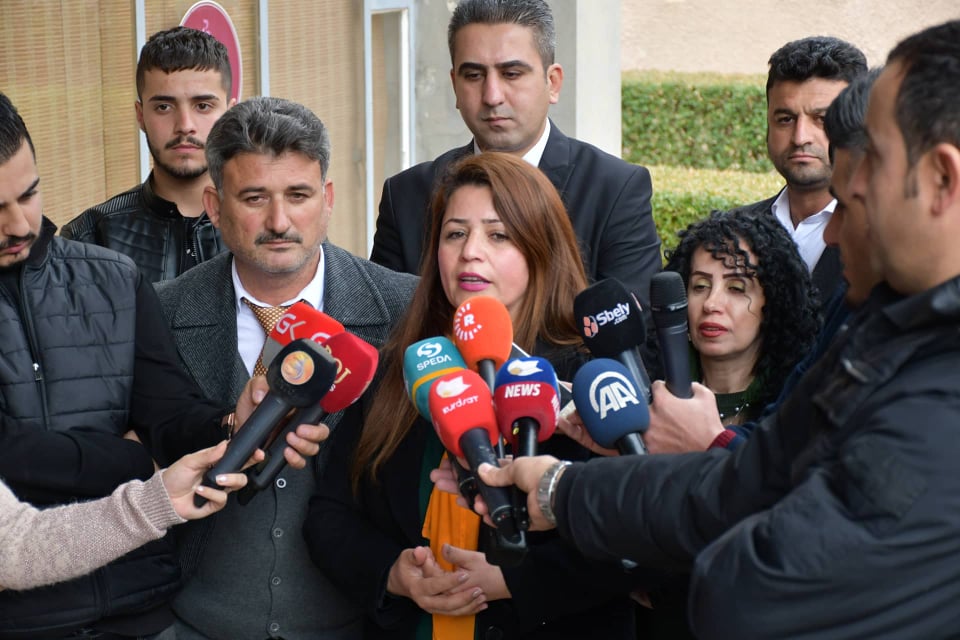 She participated in different activities to explain how to reduce violence in all forms against women.

The Awareness and Capacity Development Organization(Awan) launched the Women’s Center for Protection and Legal and Social Guidance.

The center will provide comprehensive protection services for abused women and girls. It aims to improve access to help for women and girls who are victims or survivors of gender-based violence. The center is headed by Manar Al-Zubaid, and has an advisory body consisting of expert volunteers in coordination with the relevant professional unions as well as the Diwaniyah Police Command and the Health Department. 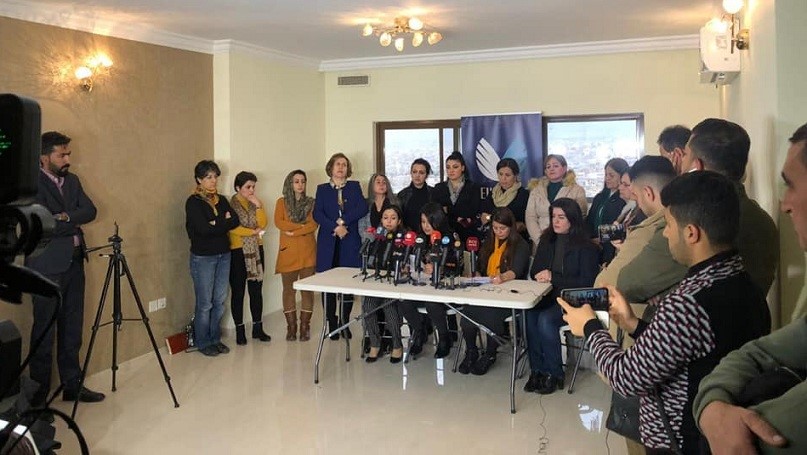 On December 8, a group of civil organizations, condemned the advice of some Kurdistan clergymen advising avoiding women riding in taxis without a man.

The group included ministers, journalists, activists, clerics, including our IAWRT Kurdestan members, At the time when groups around the world included Iraq and Kurdistan, are busy participating in campaigns against violence against women and for gender equality, in the Kurdistan region these clerics were advising women to not ride a taxi if they are with a male driver.  This is clear evidence that gender is different, and this is creating a fear of the taxi driver, further restricting women’s freedom.

A November gathering discussed how to use data and behavioral insights to prevent and eradicate VAWG, and the 16 Days of Activism Against Gender-Based Violence.
Ms. Houry Geudelekian, Chair of the CSW/NY, started the meeting by highlighting the Women of Distinction Award Nominations for NGO CSW64. In 2020, CSW/NY will commemorate the 25th Anniversary of the Fourth World Conference on Women, Beijing +25. In celebration, the organization will honor five women, one from each United Nations Region: Africa, Asia-Pacific, Latin America Caribbean, Eastern Europe, Western Europe, and others. More information is available on the CSW/NY website.

Ms. Garcia and Mishka Martin began the conversation remembering the 30th anniversary of the Convention on the Rights of the Child and the speech of the 15- years- old Millie Bobby Brown about cyberbullying, harmful practices, and bullying against girls at the United Nations General Assembly on November 20th. “I was thrilled to see Brown talking about harmful practices because girls have been strategizing against gender violence for years,” said Ms. Martin.

Focusing on adolescents and girls, Mishka Martin’s job is to research and design solutions to close the gap in policies and programs related to gender violence. “Yesterday, member states, NGOs and civil society made commitments at the United Nations headquarters in the 30th anniversary of the Convention on the Rights of the Child. But it is worth noticing that the adolescent and girls are quite invisible to those international legal frameworks. There is no mention in the Convention to gender or specific position of girls”, she said.

During the CSW/NY meeting, Ms. Martin highlighted the intersectional marginalizations that impact girls’ rights because of the gap in policies and programs. According to her, invest in international legal frameworks related to adolescents and girls, and in activists on the ground are practices that can secure their protection.

The different definitions of feminicide have also impacted public data and strategies to eradicate VAWG in Mexico. Monica Meltis, Executive Director at Data Civica, called attention to how the state’s legislations affect the prevention of femicide. “It is hard to compare the data in each state,however, we know that feminicide is not an isolated effect in Mexico. That violence is generated at home, perpetrated by partners and intensified by the presence of guns in the households”, said Ms. Meltis.

In terms of behavioral science, Marta Garnelo’s research at Behavioral Insights Team is to understand the communities’ behavior for not interfering when witnessing domestic violence. “The belief of the violence as a private matter and the lack of knowledge of how to act to help are some reasons that are preventing the community from supporting a person who is in a situation of violence,” said Marta Garnelo.
Ardra Manasi, Campaign Manager at the Center for Women’s Global Leadership, ended the panel discussion emphasizing that gender violence is a human right issue, and inviting the society to join the 16 Days Campaign.

The 16 Days of Activism Against Gender-Based Violence kicked off on November 25th, the International Day for the Elimination of Violence against Women, and ran until December 10th, Human Rights Day. It was started by activists at the inaugural Women’s Global Leadership Institute in 1991 and continues to be coordinated each year by the Center for Women’s Global Leadership.