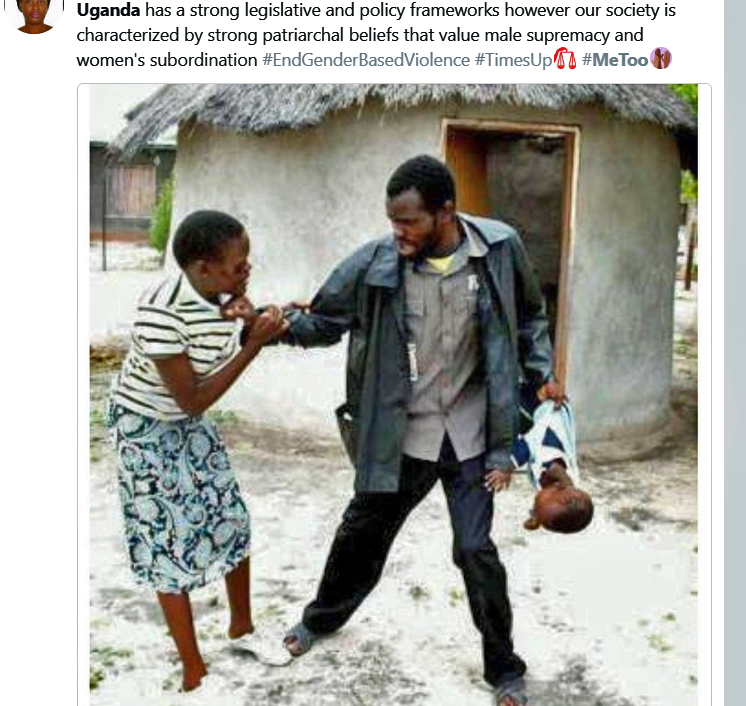 “many cases of sexual exploitation and abuse and gender-based violence still go unreported,” Awareness of  #MeToo campaign is not high in the media or the general population. the journalists unions leadership have not been made aware of any problems. 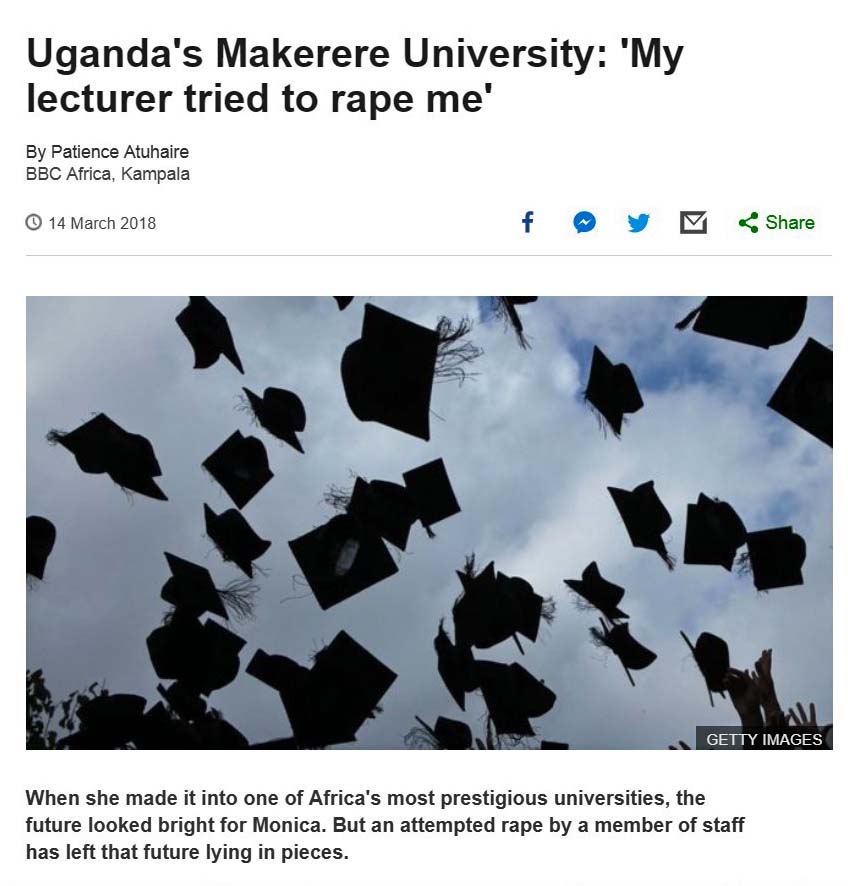 In Uganda the #MeToo campaign went live in October 2017 as a hashtag on social media and electronic media which demonstrated the widespread prevalence of sexual exploitation, abuse and gender inequality.  The #MeToo campaign encouraged all women who had been sexually harassed or assaulted to say it out loud or write #MeToo as a status to give people a sense of magnitude of the problem.

I realized the campaign was on in Uganda through  various non-government organisations (NGO’s) and other organisations using the hashtag (#MeToo) but people were not familiar with it, so I had to explain it to them.

The #MeToo campaign offered a self-reflecting moment for most women and girls who had either through ignorance or reluctance kept silent about the sexual exploitation and abuse (SEA) and sexual and gender based violence (SGBV) they had experienced. I have not found any Ugandan women using the #MeToo to speak publically about sexual harassment except for a Makerere university student who recently spoke out about her lecturer harassing her on social media. She later went to police which the lecturer denied the allegations and the case is still under investigation by the university and police. BBC report

Ms. Pearl Karuhanga Atuhaire is a women rights advocate, she says despite the #MeToo campaign, many cases of sexual exploitation and abuse and gender-based violence still go unreported, ”due to survivors’ fear of being criticized by their families or communities.”

In Uganda, the Baganda clan have a saying, ‘EBYOMUNJU TEBITOTOLWA’ (No woman is supposed to tell stories from their home). They must be silent to keep their marriages. If marital violence or sexual abuse cases are reported, in some instances, prosecution is frustrated by insufficient facilities to dispose of the many SGBV-related cases.

Despite the existence of Uganda’s well-crafted laws against SGBV, Ms Atuhaire said they lack proper implementation so many of the laws remain only on paper.

While the constitution of Uganda guarantees equality between women and men, discrimination against women and girls persists in many areas. This includes direct or indirect reluctance to enforce the law, the assumed superiority of males as well as cultural norms. 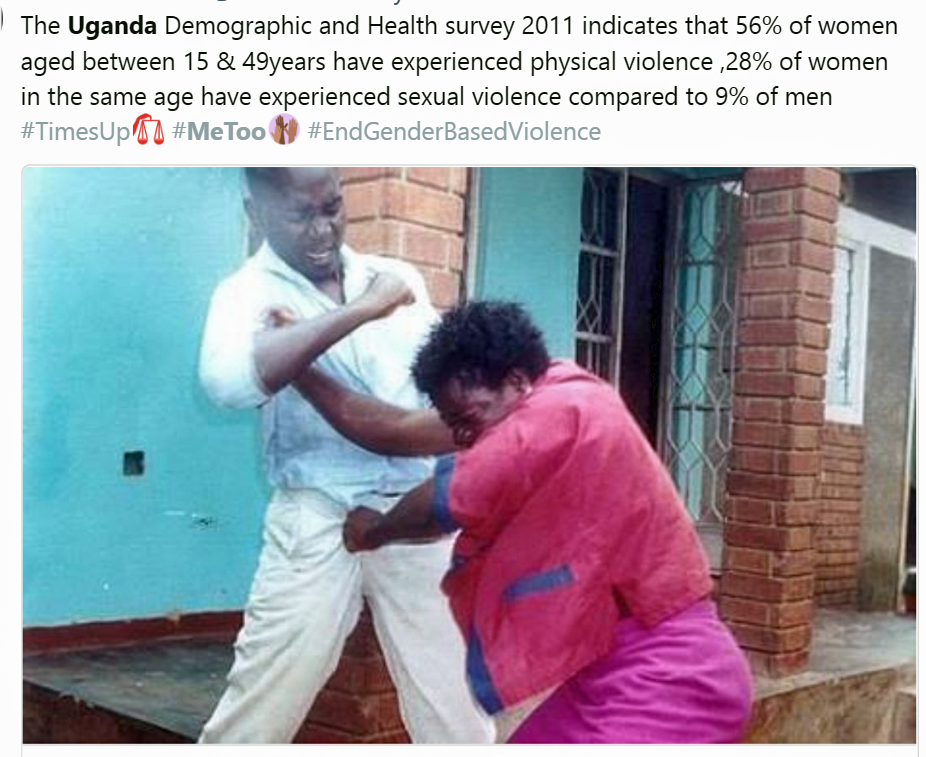 Ms. Atuhaire says that some of the perpetrators of violence against women are renowned politicians or businessmen whose power in society jeopardizes efforts to bring justice to the survivors. She noted that in most of these cases, evidence against the perpetrators is destroyed through bribing the institutions of justice and letting the perpetrators walk free or, in extreme cases, survivors are murdered.

Statistics from the office of the Director of Public Prosecution (DPP) indicate that out of 1,594 rape and 7,618 defilement cases reported in 2015 and 2016, only 57 per cent od cases resulted in a conviction or punishment. Such deficiency in prosecution allows perpetrators to commit such crimes with impunity. Reports on cases of female-targeted killings are on the rise in the country, especially in the central region which has the highest population.

“The issue of women’s rights and empowerment is paramount if women and girls are to be protected from SGBV and SEA. Not only women’s rights are human rights, rather, women’s betterment has an intrinsic value” Atuhaire said.

In Uganda, like a number of countries in the sub-sahara, women are still grappling with having their voices heard and being included at all decision-making levels. Women still carry the burden of domestic chores with most of them doing the work of caring for their children. With such a challenge, women cannot perform up to their full potential in working life outside the domestic labor they are tied up with at home, and as a result, will not be promoted quite often as their male counterparts.

The campaign has exposed sexual assaults harassment and discrimination in the media and entertainments industry in many countries, but Mr. Kagolo Robert, the President of the Uganda Journalists Association (UJA) says cases of sexual harassment and violence against women in media were not common in Uganda, although he admitted “it is possible that victims kept their stories to themselves for fear of being victimized.”

He says the #MeToo campaign is not yet popularized –  except for a few journalists. “No-one among the female members of UJA had ever brought any case or complained about sexual harassment or abuse” he said.

Mr. Ssenyange Alfred, the Vice President of the Uganda Journalist Association in charge of the Central region said he had no knowledge about the #MeToo campaign. “This campaign should be popularized in Uganda since it’s not yet so much in people’s ears”. The vice president also stressed that there was an increasing number of female journalists joining the industry each year, implying the profession is a good place for women. Audio of the union leaders here.

Despite the various laws governing employers and employees such as ‘the Employment Act’ a number of media houses still experience sexual harassment and gender inequality. The IAWRT Uganda Chapter has been developing the Gender Media Guidelines for reporting in the various media houses in Uganda. It also held a number of workshops on gender mainstreaming for senior media managers and reporters (pictured below). A lot however, still needs to be done.

Ms.Kasirye Eunice the Vice Chairperson of IAWRT Uganda, says ladies should get out of the closet and speak out on sexual harassment because if all victims speak out, men will have no more room to continue the harassment.

She noted that sexual harassment comes because of male dominance in the top most positions in companies, media houses and training institutions.

She also said that female journalists also face sexual harassment from sources in big companies or even government who always have the news/ information which journalists need. Before they give you a story, they want to receive sexual favors. Sometimes the female journalists are desperate or under pressure by their bosses to deliver on some assignments and therefore end up giving in to such harassment. 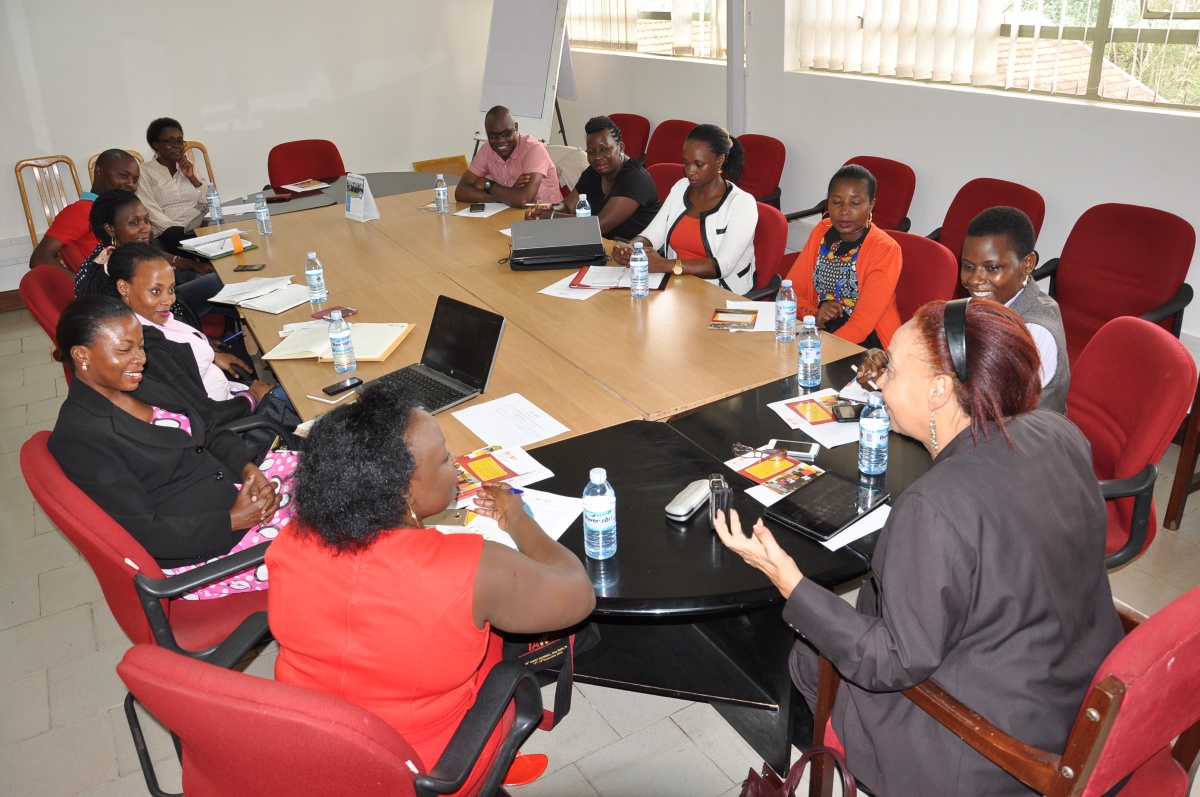 She also added that a number of media houses do not have gender guidelines, and some are owned by businessmen who do not care about anything but money. Several media houses do not want to employ women of a reproductive age. If they are employed, they are not given important programs or serious assignments to handle because the management thinks they would soon become pregnant and would need maternity leave which will inconvenience them.

“When I got pregnant with my 2nd baby, my boss called me a child manufacturing machine. I almost lost my job on several occasions. What saved me was my hard work” says Ms. Kasirye.

Ms. Sarah Nakibuuka Bakehena the Chairperson of the IAWRT Uganda Chapter called on women’s organisations and International bodies help train and give capacity to journalists and work closely with them to help execute programs that would benefit women.

“The #MeToo campaign is known to a few NGOs for example. They have been working on it without much involvement of the Ugandan media.  Unless journalists are sensitized about such campaigns, they cannot ably report or support the cause” she said.