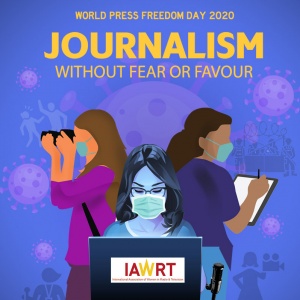 The International Association of Women in Radio and Television salutes women journalists and all media workers in the world on the occasion of the World Press Freedom Day on May 3.

Journalists are observing this day in solidarity with each other from the frontlines of the COVID-19 pandemic, working from their homes under lockdown, in online protests and gatherings, or languishing in jails for simply doing their job.

As the profession of journalism has become an increasingly dangerous vocation in the world over, persevering in this job and affirming our commitment to the public and their right to information has become in itself a triumph for press freedom.

The Committee to Protect Journalists (CPJ) tallied at least 1,340 journalists killed in relation to their work.  We remember them on this day. CPJ also recorded at least 250 journalists are incarcerated across the world. One of them is IAWRT Philippines member Frenchie Mae Cumpio, detained since February 2017 and vulnerable in the face of the COVID-19 outbreak in the country’s jails that reported 394% congestion rate in 2019. We demand for the immediate release of imprisoned journalists.

In our world today, journalists not only face the dangers of reporting in conflict situations or risking their lives to bring the news, but also the many downsides of the virtually-connected world such as online harassment meant to intimidate us from reporting or bully us to leave this work or cyberattacks that keep our reports from the people.

During this time of COVID-19 pandemic, governments are employing extraordinary measures to contain the outbreak and the same justification has been used in many parts of the world for restrictions to reporting or access to information, “fake news” charges against the people or the press, and other instances that undermine press freedom and freedom of expression. We must be on our guard to defend press freedom at all times—as this would also enable the people to safeguard their hard-won civil liberties.

UNESCO’s World Press Freedom Day theme this year is “Journalism without fear or favour.” This theme is embodied in 2020 UNESCO/Guillermo Cano World Press Freedom Prize laureate Jineth Bedoya Lima, a Colombian investigative journalist who reported on the armed conflict and peace process in Colombia and on sexual violence against women. She was herself of sexual violence in 2000 when she was abducted and raped in connection with an investigation into arms trafficking. We extend our recognition to Ms. Bedoya who can be an inspiration to many women journalists in these difficult times.

This theme is also embodied in so many other women journalists—each one of us who are now reporting in the frontlines, trying to carve out space for women’s voices and stories, fighting for women’s bylines or standing up for press freedom. We need media workers reporting without fear now more than ever.