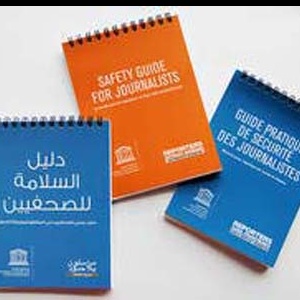 A new edition of the ‘Safety Guide for Journalists: a handbook for journalists in high-risk environments’ is available. The guide says that violence against female journalists is a “double attack” on their sex as well as their profession. Throughout the guide there are practical tips for women in the field.

The 130-page guide compiled by Reporters Without Borders in association with UNESCO offers essential information and practical advice for journalists to assist them before, during and after an assignment in dangerous areas. This publication comes in a context of developing threats against media professionals, with more than 700 journalists killed in the past decade for reporting the news. In 2015, more than 105 journalists were killed, while many more were threatened, imprisoned or kidnapped for simply doing their work of bringing news and informing to the public.

The latest edition was launched on 5 February 2016 at the conference News organizations standing up for the safety of media professionals in Paris.“The Guide is an important body of knowledge and experience acquired over the years by journalists, news organizations and groups that campaign for freedom of expression,” according to Guy Berger, Director of the Division of Freedom of Expression and Media Development at UNESCO.

The Safety Guide for Journalists contains a wide range of essential information to enhance the safety of journalists. It stresses the importance of well-prepared planning before taking assignments in dangerous missions and gives essential tools for journalists. The guide is useful for all those who work in news and information and who report from hostile environments, such as conflict zones, violent demonstrations, riots and terrorist attacks.

The first edition of the Safety Guide for Journalists was produced in 1992. Since then, it has been updated and translated into several languages and widely distributed. The new version, available in Arabic, English French and Spanish and, addresses new threats and challenges to an increasingly dangerous profession. The newly added chapters highlight the issue of digital safety, a growing worry for journalists, and elaborate on safety precautions for those covering natural disasters or epidemics. They also address the problem of sexual violence, aimed particularly at female journalists.

Journalists and news organizations are essential actors for the exercise of freedom of expression, making them targets for those who want to impose tight control on public debate and citizens’ right to information. With the new edition of the Guide, Reporters Without Borders and UNESCO continue their work within the UN Plan of Action on the Safety of Journalists and the Issue of Impunity. Aimed at creating a free and safe environment for journalist and media workers, the UN Plan of Action was adopted the in April 2012 and confirmed by the UN General Assembly in November 2013. The publication of the new edition of the Safety Guide for Journalists was supported by Sweden

The Safety Guide for Journalists – A handbook for reporters can be accessed online in Arabic, English, French and Spanish.