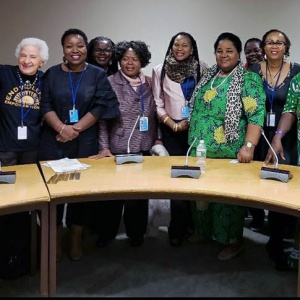 MP, Minister of Gender, Children, Disability and Social Welfare of Malawi, Dr. Jean A.N.Kalilani (pictured on right in green dress) set the stage and spirit for discussions about IT – repeating the important insight several times, “women’s space is never given, it has to be claimed” during the last week of the 2018 CSW62. The session, co-sponsored by the Government of Malawi, Genderlinks, and IAWRT, with participation by UN Women,took place in a crowded room, with many participants standing.

The Minister stressed that we stand on the brink of the fourth technological revolution, which will fundamentally alter the way we live, work, and relate to one another; because of  its scale, scope, and complexity, the transformation will be unlike anything humankind has experienced before. It is fast, and it is characterized by a fusion of technologies that is blurring the lines between the physical, digital, and biological spheres.

Considering this, Dr. Kalilani underscored the importance of having women on board in these developments, and shared the major legal steps being taken by the government of Malawi to ensure that women also have access to affordable, high speed internet, even in the remotest places.

On this inspired and inspiring note, Colleen Lowe Morna, (pictured above far left) the CEO and co-founder of Genderlinks took over.

She documented how little change has actually taken place in the space given to women’s voices as news sources in Southern African media, between 2003 and 2015. This is despite the fact that Genderlinks and other actors have worked on gender representation on an ongoing basis. 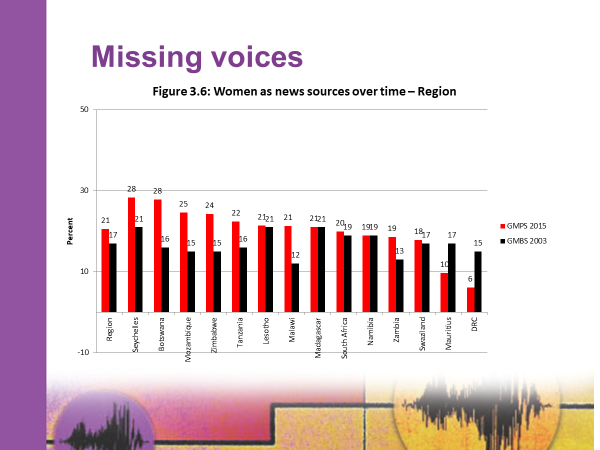 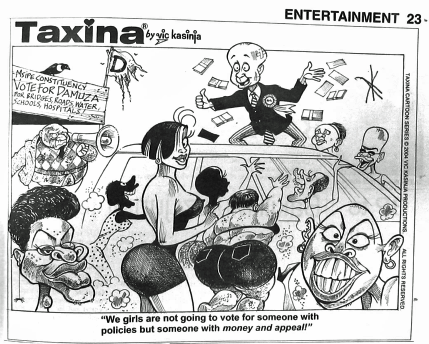 Documenting the ongoing and blatant misrepresentation of women in the media – to this day – Colleen Lowe Morna showed this newspaper “joke” from Malawi, adding that along with laziness and sloppiness by journalists, the job is still cut out for us.

To further highlight the need to continue to refine our ways of dealing with the promotion of gender equality and justice in the media, Genderlinks launched their ‘Gender and Media Digital Monitoring Tool’

The tool can be used to track the representation and portrayal of women and men in the media and is based on Genderlinks’ 15 years of media monitoring experience.

It offers customised monitoring and reporting for different clients to suit specific needs and it allows individuals to conduct their own gender and media monitoring projects, covering one country or more.

Individuals have access to and can analyze their own data and can add to global data on gender and media content for research and advocacy purposes. Such critical monitoring generates evidence for awareness creation and advocacy for change in media institutional practice, policies and editorial content.

Genderlinks says the tool is ideal for self-monitoring by media houses: training of media students; and use by media development organisations to hold the media accountable. available here.

Colleen Lowe-Mora stressed the importance of countering what she called a ‘silent form of censorship’ by simply leaving women’s voices out. “Life is the art of the possible – and change is possible!” she ended.

Turn women into coders and ensure that half of the billions of USD for digital development are for women!!! 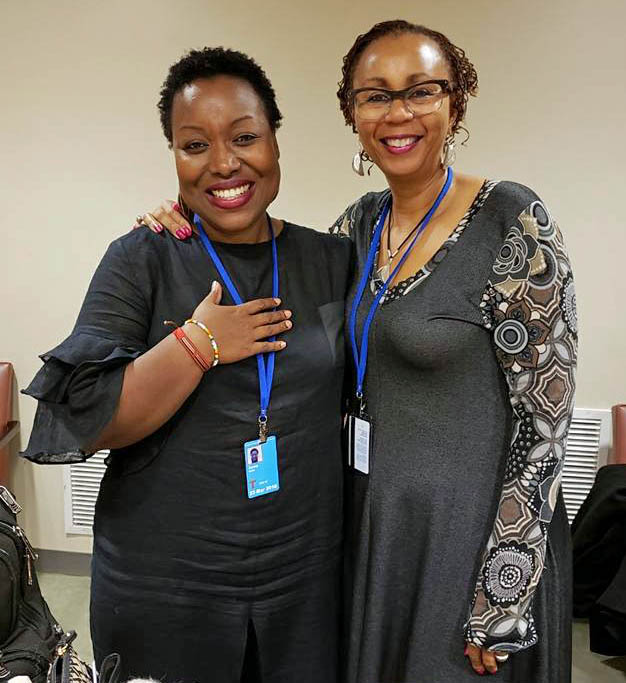 The UN Women southern Africa Multi Country Office representative, Anne Githuku-Shongwe (pictured left with IAWRT President, Violet Gonda) called for an expansion of the definition of the media and the way we address its impact on women. Due to deep-rooted gender stereotypes in all areas in and around the media, she says a transformation is required. Focused feminist initiatives are needed for this to happen. All participants in the session were invited to sign up for the un-stereotype alliance to eradicate outdated stereotypes in advertising. Multiple private sector companies have been engaging strongly with the initiative since last year’s launch.

She pointed out that Google is bigger than any African countries’ total budget and stressed the importance of understanding how these giants are dealing with and portraying women. Anne Githuku-Shongwe described it as a passive, untapped space, most often with very negative stereotypes of women and what women can do, which we need to influence for change.

She says the fact that almost all coders are men skews the focus and orientation of that space. They simply design online universes from their vantage point, but the world seen through the eyes of women is different. For example, she said, when searching for something related to women, you see images of women in the kitchen and with kids. When you search for men you see them active and in decision-making positions. This is stereotyping at work – probably an unconscious result of work by male programmers and coders.

It is therefore extremely important that women should make up half of all programmers and coders. “Unless we claim this space, it will continue like this.” 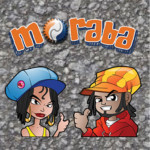 To turn this into action, Anne Githuku-Shongwe started her own tech company, AFROES Transformational Games with young women coders developing games. This was not a field familiar to Anne herself, but with the good advice and insight and her own clear vision and focus, she saw how it was – and is – possible to challenge the dominant narrative.

Moraba – an adaptation of Morabaraba or Zulu Chess – talks to young people about gender-based violence (GBV), where the gamers meet a lot of challenges and information. In the review after Muraba had been used by 250.000 school kids, a young South African man said: “I did not know that I was a rapist!” and he went on to explain how it in his culture is him, who decides all about sex in a couple: “I decide when we have sex, where we have sex and how.” And the young women recognized that this is the way it is.  Moraba was for them the beginning of new truths.

Wrapping up, Anne Githuku-Shongwe spoke about the ‘Universal Service Fund’ which – with national variations – requires telecommunications service providers like mobile companies to contribute one percent of their annual revenue to extend the reach of ICT. In Ghana for instance, the fund is managed by a company extending fibre-cable and supporting the creation of community radios and telecentres (Community Information Centres).

These national funds have large amounts of unspent money as UN women recenlty pointed out. In the US alone, the fund has 140 billion USD and in South Africa 2 billion USD.  “Half of this should be earmarked for ensuring proper access to women!” she said.

Violet Gonda opened with a presentation on the objectives of IAWRT, and reminded participants that even though it is now 23 years since the Beijing Protocol of Action was agreed upon, much still remains to be done in the area of women’s equality and justice as well as within the CSW special review theme this year: women’s role within and around the media.(pictured with Anne Githuku-Shongwe)

IAWRT has contributed – at an accelerated rate in recent years – to monitoring of the role of women in the media, advanced research to have evidence documenting the portrayal of women in the media; training women in several different fields, including security, and publishing a safety handbook for women journalists: What if…? which is available for free download. 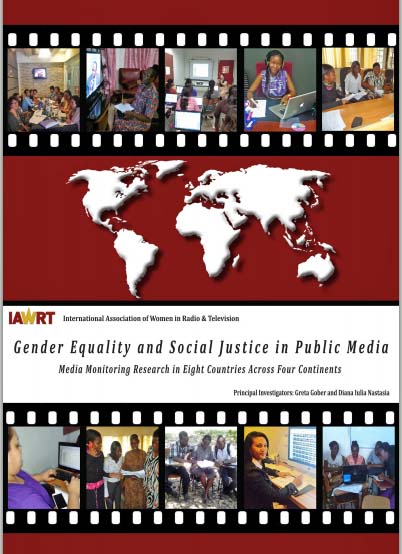 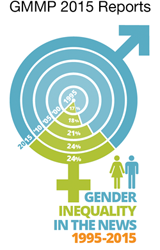 In 2015, IAWRT pursued the Gender Mainstreaming Project, which involved IAWRT members in the evaluation of public radio and public television programming (about 560 hours of broadcasting) in 8 countries (South Africa, Kenya, Tanzania, Cambodia, India, Moldova, Poland, and U.S.A) where IAWRT has either chapters or individual members.

Members from these 8 countries on 4 continents gained capacity by being trained to assess media programming and to collect, analyse, and interpret evidence about women’s participation and portrayal in the media.

Many of them have since stated that they have also become better media professionals by being empowered to critically examine the organizations they work for and judge how they serve their publics.

This 2015 report available here confirmed for public media, in a broad array of information and entertainment programming, what the Global Media Monitoring Report (GMMP) has evidenced for commercial media, and for news programming, since 1995, namely:

Women’s low visibility and denial of voice in the media and the continued portrayal of women in negative and denigrating ways has resulted not only in misrepresentation and stereotyping but also, particularly for women journalists, in real danger, where women fear for their lives when doing their work. That is why, in addition to the research and capacity building project completed in 2015, IAWRT also pursued a practical approach to safety with hands-on training and the safety handbook project in 2017. 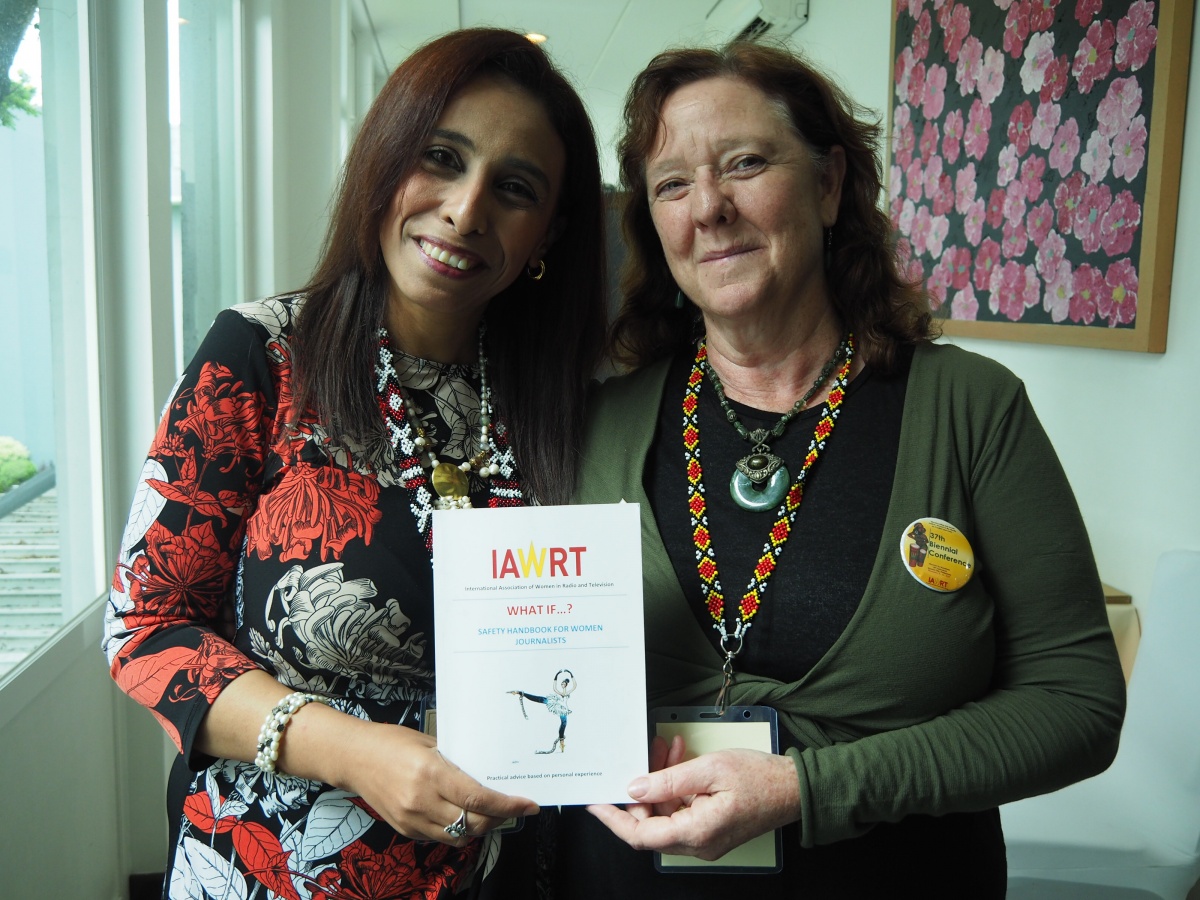 The Safety Training Handbook for Women Journalists  was informed by evidence that there is a dire need for advice and recommendations on security and safety, especially for women journalists working in war and conflict zones. The handbook written by Abeer Saady and edited by Nonee Walsh (pictured)  highlights the fact that women journalists wage a war on two fronts, the war to survive and the war against the system, which increases their vulnerability when war and conflict are also involved. The handbook focuses on issues related to physical safety, psychological safety, and digital safety, as issues regarding women’s work and representation in the media have crossed over from traditional media into digital platforms.

Violet Gonda concluded by stressing that there is a dire need for further strengthening of the role of women in the media, and she was happy that the government of Malawi, Genderlinks and UN Women are addressing that need and some of the ways forward.

Across parties, what women parliamentarians focus on, is the same!!! 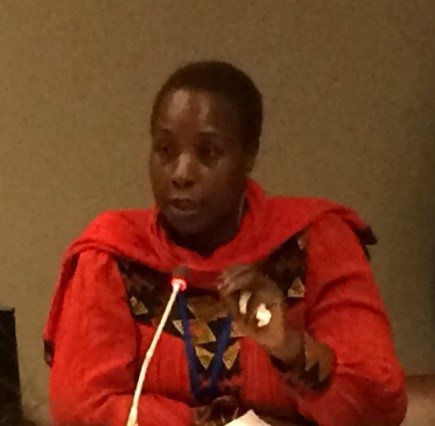 The Chairperson of the Malawian parliamentary women’s caucus, opposition MP Jessie Kabwila, pointed out that it is important to put politics aside to focus on what matters most for women across and within nations – it is the same! As women, our core objectives are the same. “To be effective we have to overcome being called “emotional”, “different” – and what is worse –  and we do that by working together!” she stressed.

Kabwila said all 33 women MPs together visit their constituencies to recognize the importance of a woman was elected – and to show what they will all fight for. They always sing a special song about exactly that – and she in the session led the Malawi delegation (all from different political parties) to stand up and sing the song they perform together back home, as a united front in their constituencies. She concluded stressing that: “The fight for food, electricity, water etc knows no politics”

We need to open spaces in the media, and to stand together across the African continent. she said.

In discussion, A Minister from Zimbabwe said that the women’s caucus there had developed a women’s manifesto to focus the work in the lead-up to the upcoming elections, due in about four months’ time, to remind the electorate why it is so important to elect women.

Ann Abieye, MP and a member of the women’s caucus in South Sudan Parliament, shared the information that they as the world’s youngest nation have 33% women in Parliament. They want more! But they also realise that quality is maybe even more important than quantity – so she solicited support from more mature nations for building the capacity of the women in their parliament.

She concluded her contribution: “Let us treat Africa as one. We are one continent – and for women and our causes to really generate change, we need to work together!”

Birgitte Jallov is the founder of Empowerhouse which fosters the development of sustainable community media as an means for people centred community transformation and works with systematic and strategic communication, she is a member of IAWRT.