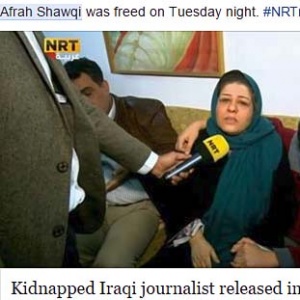 A respected Iraqi woman journalist Afrah Shawqi al-Qaisi was released by kidnappers in January, nine days after being abducted by gunmen from her home.

While she was missing, the French government applauded her courage, describing her as a journalist “who has notably worked to defend women’s rights and is renowned and appreciated in Iraq and beyond. She has also been active in exposing atrocities committed by armed groups.”

Afrah Shawqi is a veteran journalist who works for a number of international and local Arabic media media outlets, is an employee of the culture ministry, and a prominent critic of Iraq’s corruption and government mismanagement.

After her release, at a media conference, she said that she was put in a cell for nine days, blindfolded, and was interrogated concerning her journalistic career. Before her kidnapping she had written a stinging article on the Aklaam website in which she hit out at armed groups and some government officers, describing them as “weapons playboys” who “act with impunity” in Iraq.

She said that an unknown group of intelligence officers interrogated her about her journalistic activities and reporting on the site of the London based newspaper Asharq Al-Awsat, as well as focusing on her posts on Facebook.

Some local media outlets have hinted at possible involvement of police or government sanctioned militias in the abduction, but to date there has been no announcement identifying or announcing any prosecution of the perpetrators.

On her release, conflict journalism trainer Abeer Saady, an IAWRT member, stressed how important it was that Afrah Shawqi had had support.

“Afrah dared to call the armed forced ‘militias’. This was her crime, to be terrified and kidnapped in front of her two kids. She is back after a big pressure over the Iraqi government to make the militia release her.”

Journalists gathered in central Baghdad’s Tahrir Square at around 10 a.m. every day in support of the kidnapped journalist. However, after a week they were subjected to Police violence when a group decided to move closer to the government’s headquarters to step up pressure on Prime Minister Haider al-Abadi, who had promised to “do the utmost to protect her, find her and capture the group or groups responsible”.

The move coincided with high security around the arrival of the French President François Hollande in the same area. Reporters Without Borders (RSF) condemned the use of violence to disperse the 200-people near the governmental ‘Green Zone’ entrance after many refused to return to Tahrir Square, where demonstrations are usually tolerated.

Qais Qasim, one of the journalists participating in the protest, said the police fired shots in the air and beat four demonstrators with the butts of their Kalashnikov rifles. One of the portesters was hospitalized in a critical condition.

“Iraq is already one of the world’s most dangerous countries for journalists, so the police should be protecting journalists instead of posing an additional threat to them,” RSF secretary-general Christophe Deloire said.

According to RSF’s latest annual round-up, seven journalists were killed in 2016 in Iraq, The Committee to Protect Journalists ranked Iraq the second deadliest place for journalist after Syria in its journalist safety data. Iraq is ranked 158th out of 180 countries in RSF’s 2016 World Press Freedom Index.

Often these international figures do not cover the full extent of the dangers for local journalists, and at least one locat report has suggested that last years media death toll was much higher.

Abeer Saady says women journalists in the Middle East particularly need to know that they have support. “She is now free, but really how free she is to express herself again?

How free are other female journalists in Iraq or any conflict area to do real journalism?”