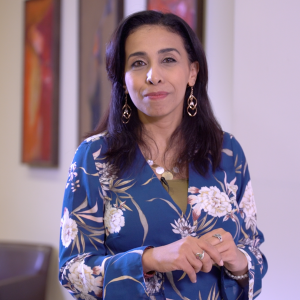 Abeer Saady, a war correspondent, media consultant and trainer, has about two decades of professional experience covering events in conflict areas in the Middle East, Africa and Asia. Abeer has gained an international reputation for media development and training in conflict areas. During her tenure as Vice President of IAWRT, the association has carried out many training activities in countries in Africa and Asia.

IAWRT has already prepared the journalist’s safety handbook published by the International Association of Women in Radio and Television. In your opinion, what are the most important points regarding the safety of women journalists in this region that must be taken into consideration?

Journalists are exposed to two kinds of attack, first of all they are being targeted as a journalist. We know that the world has become a very tough place for media professionals of both sexes in general. Second, there is the gender-related attack, which includes more threats, to women journalists as women. Such threats include harassment, for example, harassment of journalists in the workplace, by sources, or electronic or digital harassment. There are also threats made to the journalist’s own family, which are more likely to be aimed at female journalists working in war and conflict zones.

In my field of work, I focus on the e-threat of journalism, because the world is relying on social networking platforms more widely now, and the journalist is always exposed to some kind of comment or attacks, across those platforms. Often threats to the press which begin via electronic means, may end up killing the reporter, in the worst circumstances. This happened to the Malaysian investigative journalist Daphne Karuana Galizia, who participated in the Panama Papers report, a large investigative project in which journalists from all over the world participated. Those who killed her started by sending electronic threats.

I would like to point out that any kind of harassment and electronic threat can be dealt with, and the media outlet in which the journalist works must take responsibility for those threats, and make sure that there are clear policies followed by women journalists in this regard, within each institution.

Preparation is the key, and a journalist is professionally prepared. She or he should also prepare for it in terms of security … to ask what the risks are and who is behind those risks. In the case of press interviews, assess whether the meeting places are safe or not. Because of her or his identity, such as nationality, gender and race, assess whether or not identity issues can be hidden or dealt with, or if they are inherently unchangeable, the journalist therefore decides not to do so.

The journalist must take into account all the details during the execution of her or his journalistic functions, as a means of moving to the site of the event, the paths s/he takes along the way, the question of surveillance, whether it is electronic and whether there are cars following or not. It is important that the journalist does not publish all the information on electronic communication platforms and classifies information according to sensitivity and privacy. Finally, I would like to emphasize the psychological integrity of the journalists. If you are conducting an investigation like the ARIJ network, these investigations put us under great psychological pressure, and we have to know that the person is a doctor to her or himself. Do not forget that we also have to live a normal life alongside the professional life..

Based on your experience … What are the most important skills that need to be available to a journalist specializing in war and conflict areas?

The most important skills are those related to journalistic work in general, along with good experience and constant attendance at the occupational safety courses, as well as constant access to the latest things related to this, even the first aid courses, these things became necessary, and there are many courses related to mental and physical safety, First aid courses, and most importantly, the journalist has the skill to assess risks and how to deal with them.

Finally Abeer stresses that safety comes first and that there is no story that is worth our lives, pointing to the death of famous colleagues such as Daphne Galizia and Gauri Lankesh