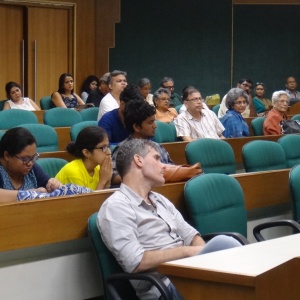 Despite the pouring rain and the crawling traffic outside in Delhi, the Gulmohar Hall at the India Habitat Centre was virtually full on Monday. August 13.

The audience had gathered to watch Velvet Revolution, a documentary film produced by IAWRT and anchored by Executive Producer, Nupur Basu. This was the 82nd screening worldwide since the film was launched in March 2017 and the sixth screening in Delhi.

It continues to get strong audience responses, as it shows the global eco-system in which women journalists are having to do their job is downright dangerous, as state and non-state players kill and attack journalists with impunity.

In the 57- minute documentary, Velvet Revolution, six women directors take their lens close to women journalists speaking truth to power. There are gripping testimonials from women journalists in Syria, Afghanistan, Bangladesh, India, the United Kingdom, the Philippines, Cameroon and from the women journalists who worked on the Panama Papers Investigations.

“Sadly, there is no longer a red line when it comes to killing women journalists”

“Last year, of the 63 journalists killed in the world, 10 were women – the statistic for assassination of women journalists is climbing at an alarming rate” said Nupur Basu in the Q and A that followed with film scholar Sukhpreet Kahlon. One of the 10 women journalists killed was from India .She was Gauri Lankesh, another was Daphne Curuana Galizia, a Panama Papers journalist from Malta. Daphne was assassinated when she was going to work and Gauri was assassinated while returning from work, Nupur Basu pointed out.

“This was supposed to be the century of the media – but how did journalism become one of the most dangerous professions in the world as it has become today?” the filmmaker asked.

Despite the dangers, the women journalists showcased in the documentary remain passionate about their jobs. They were being harassed, kidnapped, attacked, threatened, and reminded that they were mere ‘women’ and should take care, yet they continued to do go back to the field and tell their stories and defy those that tried to curb their media freedom. What unites all these women in Velvet Revolution is their grit and determination.”

“When Journalists go to cover a war, it is an ‘occupational hazard’, one can expect deaths as collateral damage, but now journalists are being hunted down, killed, murdered for exposing corruption, defying dictatorial regimes and speaking out for poorer communities”.

Sometimes journalists should be the story

The impunity with which they are being killed is appalling” said Nupur Basu, “I have been saying repeatedly since we launched Velvet Revolution that journalists are missing out on their stories – they are under threat and are being killed, and they should not shy away from telling their own story to the world – only then perhaps civil society will respond and the killings will be opposed. “ 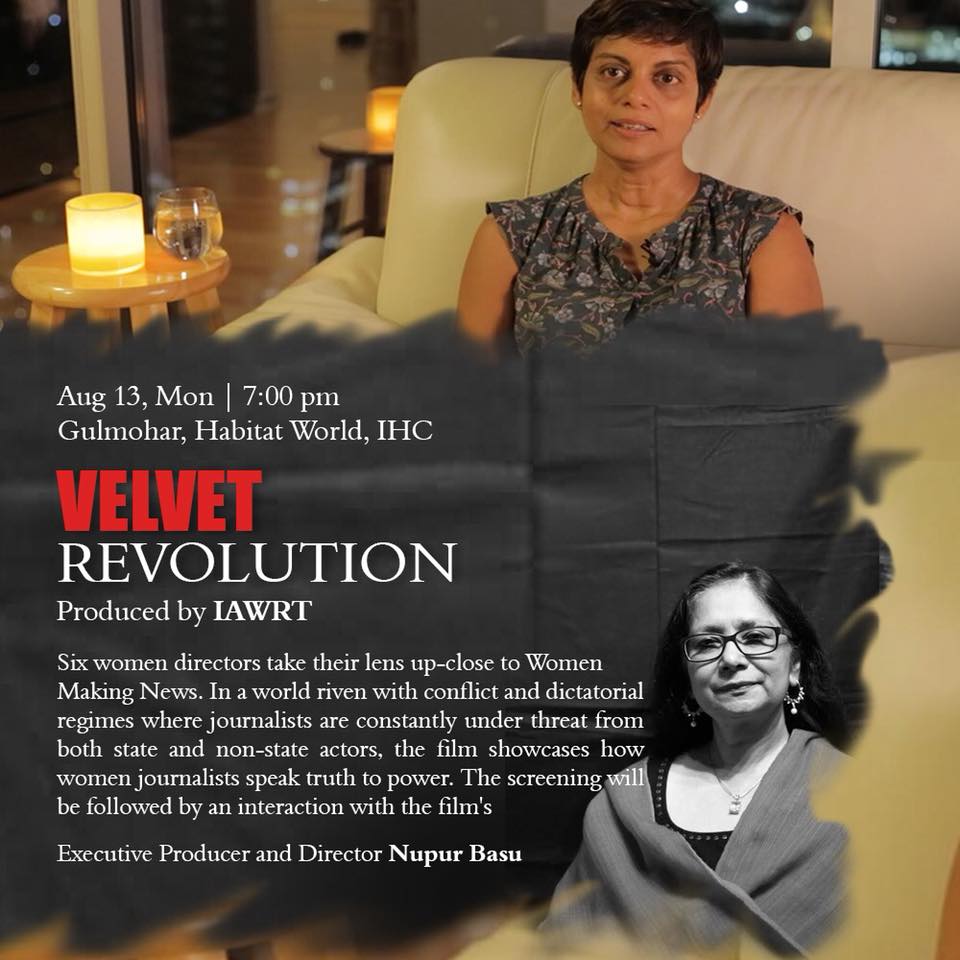 “Women are being subjected to double attacks – they are being killed, and online they are facing threats and misogynistic attacks – this is why it was important to tell their story and what it takes to be a woman journalist in today’s world,” Basu told the visibly moved audience.

The best tribute came from a man who introduced himself as a member of civil society(an activist or NGO member)  who said that from now on he would actively speak up for the protection of journalists and thanked Basu and her team members for the film.

Basu made Velvet Revolution with directors Ilang Ilang Quijano from the Philippines, Deepika Sharma from India, Pochi Tamba Nsoh and Sidonie Pongmoni from Cameroon and Eva Brownstein from USA/Bangladesh.

The film has had an invited screening at the UN Headquarters in New York on Nov 2, 2017 on UNESCO’s International Day to End Impunity for Crimes Committed Against Journalists and has won a ‘best documentary in feature length segment’ award at the Kashmir World Film Festival in 2017.

It has so far screened in New York, London, Manila, Oslo, Harare, Louisville, Kathmandu, Colombo and multiple venues in different cities in India.

More details and the Velvet Revolution trailer can be found in our projects as well as a preview of IAWRT’s next multi country documentary.