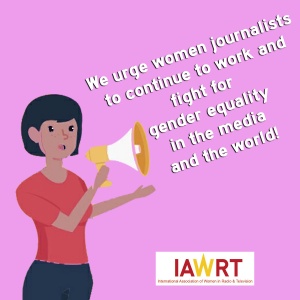 Despite some inroads in gender equality in media, women in media today continue to face all sorts of attacks, harassments and threats – in person and online.

These attacks hurt women’s opportunities, safety and lives and that is why we must tirelessly work and fight for gender equality in the media.

Sexual harassment in the media industry continues to be rampant, with the #MeToo movement gaining ground only a few years before and has more to uncover and change in the system that perpetrates preying on women.

Attacks online aimed at women journalists continue to grow. The gendered online harassment was seen to result in women declining reporting on some issues while some leave the media and news industry altogether.

Women journalists exposing salient and sensitive issues in their countries face judicial harassment, arrests and/or detention or physical attacks, while some were killed for their reporting. Only a few weeks ago, radio broadcaster Teresa Aracely Alcocer aka Bárbara Greco was shot to death after recently speaking out against violence against women and children. Frenchie Mae Cumpio, IAWRT Philippines member and executive director of an independent news publication reporting on people’s issues and poverty in one of the poorest regions in the country, was arrested and detained on ‘planted evidence.’

For 69 years, International Association of Women in Radio and Television (IAWRT) has worked and fought for gender equality in the media – in the newsroom and on air. We have worked on building capacities for safety of women journalists. When women are not safe, they also have a hard time being represented.

IAWRT calls on all governments and media houses managers to create polices that keep women safe and provide equal opportunities.

We pledge to continue to join hands with all who work for the advancement of women in all spheres of society.