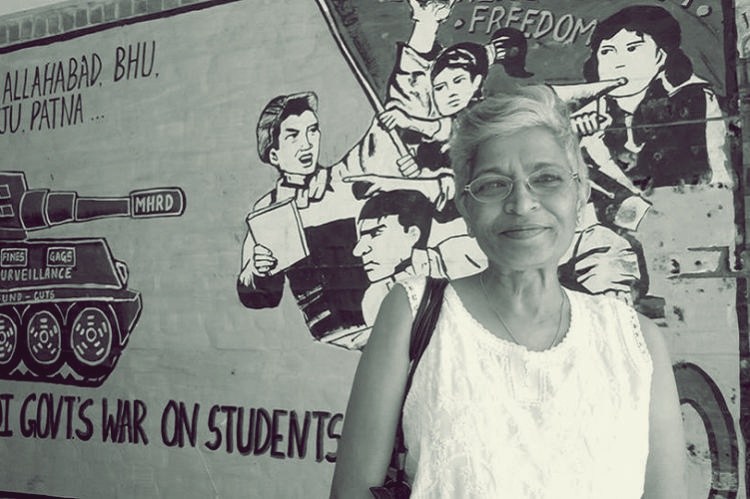 The murder of journalist & activist, Gauri Lankesh at her home in Bengaluru, (Bangalore) the capital of the southern Indian state of Karnata, has again put the spotlight on the saftey of Indian journalists. The shooting of the well respected editor and critic of right-wing Hindu extremism has been condemned widely by media groups, leading to a number of protest demonstrations and global condemnation from groups including Amnesty International, s, the Comittee to Protect Journalists, the International Federation of Journalists and Reporters without Borders (RSF).

Daniel Bastard, the head of RSF’s Asia-Pacific desk, said “We take note of the determination of the local authorities to investigate this murder and we encourage them not to neglect the possibility of a political link. Gauri Lankesh was on several occasions the target of the ruling Hindu nationalists and their supporters, because she categorically refused to submit to the self-censorship that is eating away at India’s media.”

From India, Monobina Gupta writes: If the Indian Media Did Its Job, Gauri Lankesh Wouldn’t Have Been Killed for Doing Hers

It may be naive to consider the assassination of  the feisty editor of the weekly Gauri Lankesh Patrike, a random act of violence. Politicians can’t simply take refuge with the alibi that Lankesh was killed by ‘unknown gunmen’. Especially not at a time when such acts have become the norm and are no longer aberrations in daily life. Her murder raises important questions about the culture of fear the Indian state promotes through its selective silences and refusal to name groups that use violence – often to muzzle dissenters.

Larger issues related to dissent, press freedom and the atmosphere of intolerance proliferating throughout the country every day cannot be overlooked or dismissed in accounting for what has happened. There is no getting away from this reality. Dodging the truth only emboldens those who want us to ignore the facts on the ground. There is no solace to be drawn from inquiry commissions; and no point in waiting for investigations to take their own course. Far too often, bureaucratic procedure stalls political anger, effectively ‘disappearing’ cases into a labyrinth of files and inconclusive inquiries which drag on endlessly. Invoking procedure is an effective way of shutting down uncomfortable questions.

After all, what answers have we got so long after the murders of M.M. Kalburgi, Govind Pansare and Narendra Dabholkar?* Are we not still looking for their killers? “The murder of Lankesh has eerie resemblances with those of scholars Kalburgi, Pansare and Dabholkar. All the three rationalists were assassinated in a similar fashion with the Crime Investigation Department revealing that the weapon they were shot with was also the same. The Bombay high court had also on August this year, observed that the modus operandi in the murder of Dabholkar and Pansare were similar and that it was indeed a ‘well planned’ act,” Outlook reports.

Over the last three-and-a-half years, we have witnessed a string of murderous mobs – euphemistically described as ‘non-state actors’ – operating as vigilantes in the name of cow protection, nationalism and a whole range of issues under the garb of hurt sentiments. These mobs have constantly treaded on and disregarded the rights of citizens. And in their face, our outrage as a collective body has been sporadic and muted at best.

It must be repeated that interrogating dominant power structures, repressive regimes and cultures of fear and intolerance constitutes the soul of journalism. Lankesh’s work stands testimony to this face. Till her last day she wrote about ‘uncomfortable’ issues, such as the plight of Rohingya Muslims who have failed to get an assurance from the Narendra Modi government that they will not be deported to Myanmar – to likely imprisonment or death – before their court hearing in India is over. She spoke out on gay rights, and on the deaths of children in a Gorakhpur hospital.

Lankesh’s assassination at the doorstep of her home brings to mind the murder of another woman journalist thousands of miles away from India. Eleven years ago, on October 7, 2006, the Russian writer and human rights activist Anna Politkovskaya, a journalist with the Russian newspaper Novaya Gazeta, was murdered in the lobby of her apartment building.

A staunch critic of the Putin government, Politkovskaya wrote extensively on controversial subjects like the Beslan school siege, and the Chechen war, which the government didn’t want to talk about. It is believed her murder was carried out by contract. “No other reporter has been assigned Anna Politkovskaya’s desk in Novaya Gazeta’s newsroom. It remains as a memorial, alongside her photograph and those of other murdered journalists at the newspaper, and as a reminder of the danger of the work” according to a report in The Guardian. And her newspaper still continues to practice independent journalism, ceaselessly interrogating the government.

In an interview, Politkovskaya had said, “People sometimes pay with their lives for saying aloud what they think. In fact, one can even get killed for giving me information. I am not the only one in danger.”

A day after another journalist who spoke against power has been murdered, the best and most urgent tribute we can pay to her memory is to ask: What will it take for the Indian media to start fearlessly doing its job day after day instead of mourning a handful of brave colleagues after it’s too late?

The Producer of Velvet Revolution the IAWRT’s documentary on women journalist facing danger, Nupur Basu, has also written an article paying tribute to her friend and colleague.