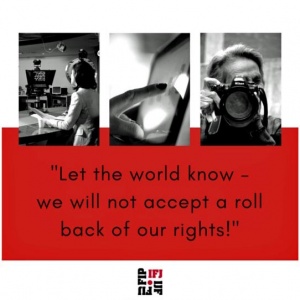 “female journalists may increasingly find themselves in the cross hairs”

The International Federation of Journalists has backed global campaigning by the international trade union movement to end violence against women and close the gender pay gap.

On International Women’s Day 2017 it has pledged to campaign for an International Labour Organization (ILO) convention against violence in the workplace.

The campaigning by the International Trade Union Confederation (ITUC) is urging all unions to “join human rights defenders, women’s and feminist organizations in calling for the guarantee and respect of women’s rights at work, in the home and in our communities”. In particular, we are highlighting the urgent need to close the gender pay gap and to support an ILO Convention on ‘Violence in the World of Work’ as a means to stop gender based violence in the workplace.”

“Over the years, International Women’s Day articles have pointed out the exceedingly stubborn gaps that refuse to close in terms of access to training, jobs, promotions, equal pay and the right to work without threat, harassment or violence, says IFJ Gender Council co-chair, Mindy Ran.

As a consequence the international Journalists’ Federation “backs the global fight for women workers’ rights, particularly now, as there is a real threat to destroy the progress made over the past decades by the rise of right-wing political movements in many countries across the globe.”

The ITUC General Secretary, Sharan Burrow, has written “The surge in populist misogyny threatens to reverse progress towards gender equality and women’s autonomy.” The outline of the confederation’s campaign on women workers’ rights, can be viewed here.

“At a time when tens of thousands of women journalists are facing threats, intimidation, harassment, violence and online and physical abuse, the need for action could not be greater” according to Ms Ran. “For female journalists, this rise of “acceptable” misogyny – as evidenced by the recent loss of legislation against domestic violence in several countries – is colliding with rising threats to press freedom.

As history has shown, these sorts of threats to the press usually lead to increases of violence. And, as with other forms of violence, female journalists may increasingly find themselves in the cross hairs”.

The the two organizations have been working on tool kits to give unions an understanding of the importance of an ILO convention against violence in the work place, and guides to organizing a campaign in each country. The IFJ will be releasing a dedicated tool kit for media workers in the coming weeks.

links to further information available through the above links.