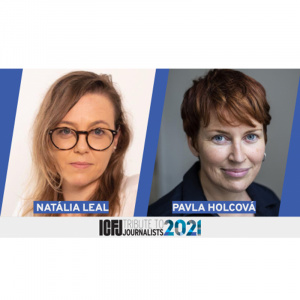 Leal is a Brazilian fact-checker who debunked deadly misinformation in that pandemic-ravaged country. Holcová is a Czech reporter who courageously carried on an investigation after the murder of a fellow journalist.

Leal and her team at Agência Lupa, a fact-checking outlet, exposed disinformation spread by Brazilian President Jair Bolsonaro and others. Bolsonaro has repeatedly downplayed COVID-19 despite the fact that at least 450,000 Brazilians have died, only second to the United States in the whole world.

Leal is also a media innovator who co-created the Google News Initiative-funded app “At the Epicenter”, which simulates for a user the distance of the next living person in the neighborhood who has not died due to COVID-19.

Holcová is an investigative journalist from the Czech Republic who was working with Slovak colleague Ján Kuciak on a story exploring links between the Italian Mafia and the Slovak government. She carried on the project after Kuciak and his fiancée were brutally murdered in 2018 and she also shared her investigation to other journalists how the killings were carried out. Her reporting for the Organized Crime and Corruption Reporting Project (OCCRP), Kuciak’s murder and investigations by other journalists spurred mass protests in Slovakia, which toppled the government of Prime Minister Robert Fico in 2018.

ICFJ will present the awards at its Tribute to Journalists 2021 on November 9.