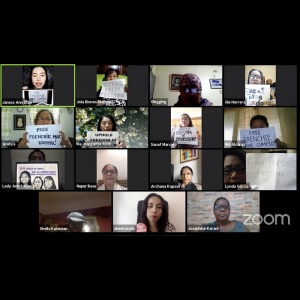 On May 3, the IAWRT Philippine Chapter hosted a World Press Freedom Day online protest in solidarity with all journalists around the world. It was an unforgettable experience because it was the first time that IAWRT organized an online protest rally via Zoom. The event was moderated by Janess Ellao of Bulatlat, also IAWRT’s members officer.

The opening remarks was delivered by Abeer Saady, Vice President of IAWRT. She expressed that one should know the truth and women journalists must do their mission in their societies and communities. She added that the measures to address the COVID -19 pandemic has been used by different governments as a threat against freedom of expression. Saady emphasized that the safety of journalists remains a primary concern at this time and those who are detained must be released.

In the statement read by IAWRT Philippine Chapter President Lynda Catindig-Garcia, the Philippines has its own share of assaults against press freedom and against the messengers of truth during this time. IAWRT Philippines decried the illegal arrests and detention of journalists.

“It appears that covering for public information has become a criminal offense. In the face of the growing health crisis, reporting from the perspective of the poor and the disenfranchised is even more important. It is through this lens that we continue to expose what appears to be a government failure to provide the people’s immediate needs including food and health services. Access to this information is a human right,” read the IAWRT Philippines statement.

IAWRT members from all over the world expressed their solidarity with the the IAWRT Philippines members who were arrested and charged and one that remains in jail amid the COVID-19 pandemic and lockdowns in different areas in the Philippines.

From a video message of Rhea Padilla of Altermidya, a network of alternative media outfits in the Philippines, she emphasized that the cases of the journalists arrested in Iloilo (two of whom are IAWRT members) have to be withdrawn from the courts. Frenchie Mae Cumpio, also an IAWRT member, has been detained on “trumped up charges” since February.

Another video message came from IAWRT International Board member Archana Kapoor. She said that the attacks on the media is a new norm and it suppresses the journalists’ and the peoples’ freedom of expression. She invited everyone to condemn the use of law against our basic human rights , we must stand together support press without fear or favor.

IAWRT India Chapter President Nupur Basu expressed that the charges against two IAWRT Philippine journalists must be withdrawn, because they are not criminals and journalists should have not been jailed. She said the women journalists are in the eye of the storm and they are experiencing severe attacks together with male journalists.

IAWRT US Chapter Vice-President Rebecca Myles expressed dismay at the attacks against freedom of expression. She said that Universal Declaration of Human Rights declared this, to hold opinions, as a basic human right.

Eunice Nankwanga, IAWRT Uganda Chapter President, said women are experiencing hard times. The information is not disseminated. Women journalists are abused and must stand together, and fight for their space. She stressed that there is no compromise with one’s work and integrity.

IAWRT Kenya Chapter President Josephine Karani said that journalists are targeted by the state when they perform their duties. But journalists must stand up and say NO to this suppression of our duties and rights, perform journalism without fear or favor.

International Board Member Greta Gober said World Press Freedom Day is a great occasion to show solidarity. She said that in every crisis there is disinformation, journalists are marginalized, journalists are attacked and are in danger. Women and girls are prone to challenges and we need our journalists for their voice to be amplified.

In between the statements presented, there were three performances by various Filipino artists from different parts of the world. Levi Abad sang a song on press freedom, political prisoners and the disenfranchised in society. IAWRT Philippines member Aileen Cuevas read a poem.

Garcia recapped the online rally. The international network of IAWRT expressed solidarity among members and chapters and journalists in the world who are covering and experiencing this pandemic. The event was a much-needed morale boost in these difficult times.