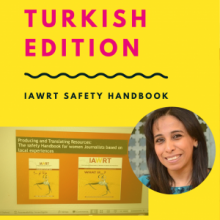 Read the English translation of the foreword to the Turkish Edition here.

The Turkish edition of the IAWRT Safety Handbook was printed by the Journalism and Media International Center of the Oslo Metropolitan University.

“We have the safety handbook now in English, Arabic, and Turkish,” said former IAWRT Vice President Abeer Saady and author of the IAWRT Safety Handbook. Saady is based in Germany and continues to give safety trainings to journalists online during the pandemic and lockdown, but is now slated to give face-to-face safety training soon.

See below the English translation of the foreword to the IAWRT Safety Handbook Turkish Edition:

Journalism is not a safe profession.

Not only in Turkey, but also in a significant part of the world…

That’s our job, to be in unsafe places; in conflict zones, social events, disasters, catastrophes, riots…

It’s not safe to be a woman.

Not only in Turkey, but also in a significant part of the world…

Being a woman isn’t safe even when you’re at home.

Being a journalist woman is a struggle in itself; at work, in the field, in digital media…

Journalist women need to learn for themselves how to stay safe. If you are not very lucky, you will not have someone with you to tell you and guide you when you start your career. We do not have safety manuals, guides and protection mechanisms prepared by the media organizations. Of course, if you can work for an organization.

Freelance journalists are even more precarious. You often learn from experience how to stay safe.

Newsroom culture still accepts men as the norm today, for practical and ideological reasons. Working conditions, discourse, terminology, needs are always determined by men. For example, women are not taken into account when buying steel vests and helmets for reporters going to the conflict zone.

As the Women and LGBTI+ Commission of the Journalists’ Union of Turkey (TGS), we conducted a survey in 2018 in order to reveal and make visible the discrimination and violence faced by women working in the male-dominated media environment in business life.

Male administrators were the first to use violence. Next came his colleagues and the police.

The sharing of experiences in the workshop in question also revealed how all these experiences traumatized journalist women, they lost their sense of trust and they felt left alone.

According to the Citizen Journalism Perception of Professional Journalists in Turkey Research conducted by Barış Çoban and Bora Ataman in 2019, 93.1% of journalists use social media for the purpose of following news/information. The rate of those who prefer social media to share their news is 59.5 percent. But journalist women are not safe here either.

The criticism of the new media environment, which fosters the ideals that it will be a participatory and democratic environment in its emergence, reproduces masculine domination, spreads it much more strongly, and tries to deter especially women with the oldest known methods. The recommendation of the Committee of Ministers of the Council of Europe of 13 April 2016 states that “[online harassment of women journalists], whether perpetrated by state or non-state actors, has a very serious chilling effect on freedom of expression…”