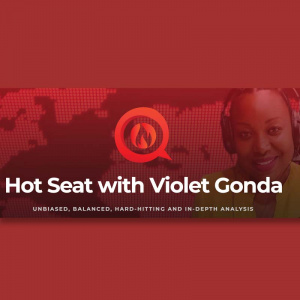 “The platform started more than 15 years ago as a radio programme that engaged Zimbabwean politics and providing alternative ways to circumvent state censorship in the country while reporting from exile. The unique strength of this platform is that it will focus on issues that are not only important to Zimbabwe but which also affect African states and societies as a whole and seeks to go deeper to investigate complex issues,” shared Gonda of the show’s origins.

Her first guest on Hot Seat is Emmy Award-winning Hollywood actress Thandiwe Newton. Newton is known for her roles in shows Westworld and Line of Duty, and movies Mission Impossible 2, Interview with the Vampire, and Beloved among many others.

Newton talked with Gonda about racism and sexual abuse in Hollywood, the political crisis in Zimbabwe, and reclaiming her Zimbabwean identity. Earlier this year, the actress who went by Thandie for most of her career took her name back: Thandiwe. It is a word of Nguni origin meaning ‘beloved.’

The multi-awarded actress for her role as a sentient android in the hit TV show Westworld shared that her involvement with the human rights issue in Zimbabwe was triggered by violence in the country and the arrests of Zimbabwean author and Booker Prize nominee Tsitsi Dangarembga and activists.

Newton also asserted that we must believe women who say they’ve been abused.

“We believe women, we start from that place,” Newton said empathically

In May 2020, three women, activists and opposition leaders of the Movement for Democratic Change were stopped then abducted at a roadblock guarded by police and soldiers at a protest in Harare against the state’s lack of aid for the poor during the Covid-19 lockdown. They were sexually abused and tortured while being taunted and threatened for going against the government and then left by the roadside a few days later.

“Why would someone talk about something shameful as being abducted and sexually abused. Who wants that as an identity? No, you don’t,” Newton said, referring then of her own experience of sexual abuse.

Dozens of pro-democracy campaigners, trade unionists, and opposition officials have been abducted by suspected state security forces in Zimbabwe in recent years. In the last year, government officials suggested a “third force” was carrying out these human rights violations to undermine the government. But many observed how this same “third force” attribution by the government has been repeatedly used under the 37-year rule of Robert Mugabe.

Gonda’s show Hot Seat has tackled such issues and the overall political crisis in Zimbabwe. Her critical reporting has made her a subject of government reprisals several times.

In August 2000, Gonda left her home country to study for an MA in International Journalism in London. She expected it would be for one year. However, she spent the next 17 years in exile as a result of being banned from returning to Zimbabwe by Mugabe’s regime due to her reporting on human rights atrocities mainly through SW Radio.

All those years away, she continued to report on the issues gripping the people in her home country. She utilised social media such as Twitter, Facebook, and YouTube, and set up web broadcasts on Hotseat with Violet Gonda, which features long-form interviews as critical analysis of Zimbabwe as a country not returned to democracy. This allowed her to keep connected to her people despite the distance.

She returned to Zimbabwe in 2018, reported on the transition and the elections, and had to return to London after almost a year for her safety.

Very much like this Hot Seat episode launch, she dives deep into the stories and issues of her people while reporting from London. But in this way, she has also been able to share the stories of Zimbabwe to the whole world.

Check out her website that hosts her show Hot Seat for the interview with Newton and for future episodes.