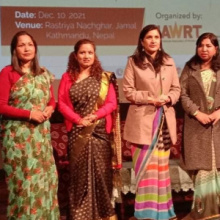 On International Human Rights Day today and the final day of the 16-day Activism Against Gender-Based Violence, IAWRT Nepal hosted its 3rd IAWRT Nepal Short Film Competition in the Rastriya Naachghar with the slogan “Stories Through Women’s Lens.”

Given the current Covid-19 pandemic situation, the event was organized in a small gathering of media experts, filmmakers, journalists, and IAWRT members.

The competition received 17 short films produced and/or directed by female filmmakers. The four best movies and their directors were awarded.

Congratulations to the winners!

A girl child is raped by her uncle. The mother, ‘Phaguniya,’ takes a stand and fights for justice, but the family’s head forces her to keep the matter quiet for the family’s prestige in society. However, on the other hand, the girl’s mother will not stop until the preparator is punished.

A self-assured young woman in her early twenties recalls how she first chose the profession (as a sex worker) to overcome a financially difficult situation for herself and her younger brother, who became orphans at a young age, despite societal norms that sex work is considered a sin. She regards sex work as a dignified profession, just like any other in society, and she has no regrets about her decision. She aspires to further her education, have a family, and live a dignified life, just like any other young woman. She empathizes with others who have had similar experiences to her own and aspires to live her life as a supporter for them. She defies all of her own and others’ preconceived notions about herself and others. After all, she’s just a normal girl living in a city of dreams.

Samaira Shrestha is an inspiring and confident transgender woman born male but began feeling emotionally and mentally female at the age of ten. She remained silent and concealed her identity for 21 years, fearing that her family and society would ruin her and her life. However, when her parents wanted her to marry a relative girl, she mustered the courage to reveal herself as a girl. It was difficult for her parents to accept this fact initially, but they gradually accepted it and encouraged her to grow into a confident woman and pursue her dream. She is now living her dream life and inspiring others in the LGBTIQ community with her stories.

Dolpa’s economy is based on tourism and livestock. As a seasonal source of income, people used to collect and sell yarsagumba (a highly medicinally valuable caterpillar fungus). However, over-harvesting and climate change have reduced the collection of yarsagumba and have melted snows from the Himalayas, reducing the number of tourists. Climate change is wreaking havoc on people, particularly the Himalayas, and women are highly vulnerable.

The British Council supported the competition.